By Jay Deshmukh and Haitham El-Tabei4 hours ago

Cairo (AFP) - A crackdown by Egypt's authorities on the Muslim Brotherhood has left hundreds of Islamic charities struggling for funds, with experts warning the move could impact this week's referendum on a new constitution.

The government installed by the military after Morsi's ouster has seized assets, bank accounts, hospitals, schools and institutions run by Islamic charities as part of its crackdown on Morsi's Muslim Brotherhood movement.The Tuesday-Wednesday vote has been billed as the first step in Egypt's democratic transition after the military overthrew Islamist president Mohamed Morsi in July following huge protests against his one-year rule.
Analysts say Morsi's supporters, who have been clamouring for his reinstatement, are likely to find backing for their call for a boycott of the referendum among grassroots Egyptians who are dependent on the charities.
"These charities will definitely have an impact on the referendum. The turnout will be much less this time," analyst Osama Diab of the Egyptian Initiative for Personal Rights told AFP.
"The focus of the Muslim Brotherhood is to ensure a low turnout and the Islamic charities can influence people for that. They can mobilise people through these charities to guarantee a low turnout," said Diab.
Mustafa Kamel al-Sayyed, professor of political science at Cairo University, agreed.
"The Muslim Brotherhood could use charity networks for mobilising people to boycott the referendum or elections, given their influence on the people," he said. 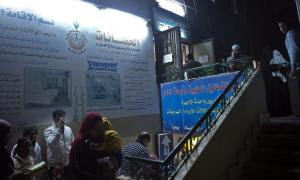 Working class Egyptians queue outside an Islamic charity hospital in southern Cairo's Al-Haram d …
"These charities do offer services that aid people and the government's measures (against them) could backfire," he said.
According to experts, however, the boycott is not likely to be extensive enough to affect the final outcome of the vote.
The charities say they aid millions of impoverished people in Egypt.
They are also seen by many as providing the Brotherhood with a solid social platform that helped it dominate all elections since the fall of president Hosni Mubarak in the 2011 uprising.
Experts say the authorities suspect that some of the funds are used by the Brotherhood to mobilise anti-government protesters or even for funding militant activities.
Islamic hospitals struggle
A tour of a hospital, one among 30 such facilities operated by the Islamic Medical Association, a non-profit charity group, reveals the extensive reach such charities enjoy in Egypt. 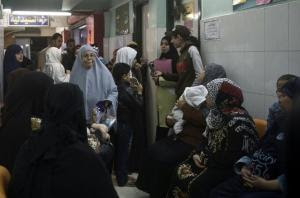 Working class Egyptians queue for check-ups at an Islamic charity hospital in southern Cairo's A …
"To me it does not matter who operates this hospital," said Mahmoud Sami, father of a prematurely born baby that was recuperating in an incubator at the hospital in a crowded Cairo district.
"We are getting quality treatment for our child at an affordable price."
The hospital charges Sami 200 Egyptian pounds ($28, 22 euros) daily, compared to about 500 pounds charged by private hospitals, while public hospitals are ill-equipped.
Officials at the hospital say they treat about 800 patients daily.
But manager Ayman Mustafa says the hospital is struggling because its bank account has been frozen, and could be forced to shut down, affecting thousands of people in need of care.
"Every day we deposit money into our bank account, but we can't withdraw our funds because the account is frozen," Mustafa said, adding that the hospital depends on private donations.
Analysts say people like Sami who depend on Islamic charities could be swayed to boycott the vote at the referendum.
"These organisations have created a goodwill, have created empathy" for the Brotherhood, said James Dorsey, Middle East expert at Singapore's S. Rajaratnam School of International Studies.
"It has created a platform that the mother organisation can use, but this does not deny the fact that these organisations provide services that benefit people".
These networks "legitimately exploit the failures of the state," he said.
'Crackdown on everything Islamic'
Gamaa Sharaaya is Egypt largest Islamic charity with a network of 1,100 hospitals, clinics, schools and mosques that it says serve more than nine million people.
The crackdown is "on anything that is even remotely Islamic", even if it is not linked to the Brotherhood, said Mustafa Ismail, secretary general of the 100-year-old charity.
Ismail said his charity does not sympathise with Morsi's Brotherhood. "We have no political affiliations. We only serve the poor and the needy."
But social solidarity minister Ahmed el-Borei insists the charities help "control the poor politically" while former ministry adviser, Mohamed el-Dmerdash, says the crackdown on the charities benefits only the Brotherhood.
"The Muslim Brotherhood will take advantage of poor families who don't receive (state) aid and these people will take part in Brotherhood demonstrations," against the authorities, he said.
Egypt Islamists