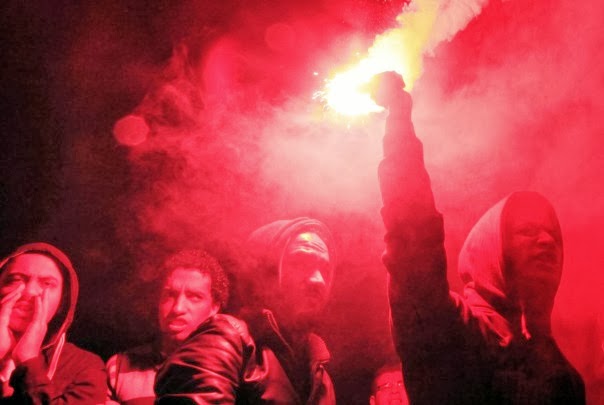 The disputes reflect the broader crisis that has shipwrecked Egypt’s transition from autocracy to a politically more liberal society following mass anti-government demonstrations in 2011 that forced President Hosni Mubarak to resign after 30 years in office. Militant soccer fans played a key role in the toppling of Mr. Mubarak and resistance to subsequent military rule.

In Egypt’s latest twists and turns, sports minister and former national soccer team player Taher Abou Zeid has spotlighted the Middle East and North Africa’s incestuous relationship between sports and politics that FIFA largely chooses to ignore. FIFA has a history of enforcing its nominal ban on political interference in football only when that intrusion becomes so flagrant that the soccer body is left with no choice but to act.

Mr. Abou Zeid twice in the last six months sought to replace the management of Cairo arch rivals Al Ahli SC and Al Zamalek SC, Africa’s two top performing clubs. He succeeded in the case of Zamalek that has been managed by an interim board after Mr. Abou Zeid sacked its elected chairman, Mahmoud Abbas, last October. Fans of both clubs have long denounced management as corrupt and demanded that they resign.

Controversial Al Ahli chairman Hassan Hamdi proved a tougher nut to crack. Mr. Hamdi was being investigated on corruption charges and had his assets frozen under President Mohammed Morsi, Egypt’s first democratically elected president who was deposed by the military last July.

The deal was designed to infuse cash into financially troubled clubs that have suffered as a result of professional leagues having been suspended for much of the last three years and fans being banned from matches since they resumed in late 2013. Mr. Hamdi felt Al Ahli, Egypt’s most popular club with an estimated 50 million supporters, was better served by signing a separate agreement worth $5.8 million with Lebanon’s Future Media Company.

In contrast to Zamalek’s Mr. Abbas, Mr. Hamdi successfully persuaded Egyptian Prime Minister Hazem Al-Beblawi to override Mr. Abou Zaid’s decision. Al Ahli’s board elections should have been held last year but were postponed because of the political crisis engulfing the country.

The ERTU deal was also designed as an affront to state-owned Qatari broadcaster Al Jazeera, five of whose reporters and producers have been detained on suspicion of spreading false information harmful to state security and membership in a terrorist organization, the Muslim Brotherhood, which has been banned and criminalized since Mr. Morsi’s overthrow.

The ERTU has accused Al Jazeera of illegally using its equipment during the coverage of protests against Mr. Morsi’s overthrow on Cairo’s Rabaa al-Adawiya Square. Hundreds were killed when security forces last August brutally cleared the square where pro-Morsi protesters were camped out. ERTU ignored Al Jazeera’s rights to African Cup matches by broadcasting in March a match between Egypt and Ghana. Two weeks later, Mr. Abou Zeid ordered the EFA not sell the rights to Egypt’s premier league to Al Jazeera three months after the network had acquired the rights for a period of three years.

Relations between Qatar and Egypt have deteriorated because of the Gulf state’s support for the Brotherhood and its hosting of prominent figures associated with the group, including popular preacher Sheikh Yusuf Qaradawi, who regularly denounces Egyptian strongman Field Marshal Abdul Fattah al-Sisi and calls for the overthrow of the military-backed government.

In a January 22 letter to the Egyptian Football Association (EFA), FIFA secretary general Jerome Valcke gave the soccer body until February 5 to report on the state of affairs. "Should the current situation persist, we would have no choice than to refer the case to the appropriate FIFA bodies for consideration and possible decision, including sanctions which might lead to a suspension of the EFA," Mr. Valcke warned.

Mr. Abou Zeid’s attempts to remove the management of Al Ahli and Zamalek has done little to endear him to militant fans who constitute one of the largest organized civic groups in Egypt. The fans have vowed to disrupt the minister’s bans on spectators.

Hundreds militants fans demonstrated in central Cairo in the walk-up to the January 25 anniversary of the popular revolt against Mr. Mubarak denouncing both the military-backed government as well as Mr. Morsi and his Muslim Brotherhood. Days earlier, Zamalek fans stormed the stands during their club’s match against Haras El-Hodoud in protest against the spectator ban.

"We removed Mubarak, but not the system that is still in place. We will not stop until we achieve the goals of the January 25 revolution: bread, freedom and social justice,” one of the militants said.

Despite perceptions that a majority of Egyptians support the overthrow of Mr. Morsi and the return of a military-backed strong government, the militant’s comments against the backdrop of the results of a referendum on a new constitution earlier this month reflect a sentiment that is boiling among youth who constitute a majority of the Egyptian population.

As a result, the referendum’s outcome may not truly reflect the public mood. Most importantly, few youth were among the 38.6 percent of Egyptians who cast their vote. It is unclear what percentage of the 61.4 percent that abstained from voting did so as a protest against the military’s revival of the autocratic state and what percentage stayed home for other reasons.

James M. Dorsey is a Senior Fellow at the S. Rajaratnam School of International Studies (RSIS), Nanyang Technological University. He is also co-director of the University of Würzburg’s Institute for Fan Culture, and the author of The Turbulent World of Middle East Soccer blog and a forthcoming book with the same title.
Al Ahly (Egypt) Al Zamalek Egypt FIFA Ultras