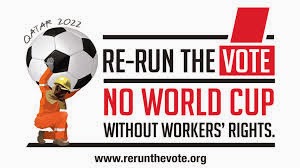 Opponents of Qatar’s foreign, sports and labor policies are striking at the Gulf state’s commercial interests in a bid to either force it to embrace reform or punish it for its support of Islamist groups.

Britain’s powerful GMB trade union called this week on British construction companies active in Qatar and particularly those bidding for 2022 World Cup-related projects not to exploit cheap migrant labor that has become a focal point of controversy over the Gulf state’s hosting of the one of the world’s foremost sporting events.

World soccer body FIFA was forced earlier this month to take the living and working conditions of migrant workers, who constitute a majority of Qatar’s population and 94 percent of its workforce, into consideration in its deliberations over whether to move the Cup from summer to winter because of the Gulf state’s extreme summer temperatures.

In a letter to the chief executive officers of 13 British companies, GMB international officer Bert Schouwenberg requested a meeting to discuss the issue. The companies on Mr. Schouwenberg’s list included the construction manager of London's Shard skyscraper, Mace, Heathrow Terminal Five builder Laing O' Rourke, FTSE 250 group Kier, Balfour Beatty which is advising Qatar on a $1 billion highways project and Interserve that was awarded $100 million worth of contracts to help the Gulf state exploit of its vast natural gas reserves.

“We believe that UK companies have a particular responsibility to ensure that their Qatar-based employees, regardless of their nationality, and their sub-contractors' employees enjoy terms and conditions within globally accepted standards of 'decent work' as laid down by organizations such as the International Labor Organization," Mr. Schouwenberg wrote. He charged that workers in Qatar "face quite appalling conditions, are treated little better than slaves and live in unacceptable squalid accommodation".

The GMB move is part of a campaign by the International Trade Union Confederation (ITUC) to deprive Qatar of its World Cup hosting rights if it fails to improve working and living conditions and abolish its kafala sponsorship system which makes workers beholden to their employers.

British and other foreign contractors targeted by the unions are likely to point to the fact that on paper Qatari rules and regulations guarantee a host of workers’ rights in terms of working and living conditions but not the more politically loaded ones such as the right to form independent unions and bargain collectively. The Qatar 2022 Supreme Committee, which is responsible for organizing the World Cup, as well as Qatar Foundation have this year adopted charters that go beyond Qatari law in recognizing workers’ rights.

In practice, Qatar has however lagged in implementing and enforcing its rules and regulations. The Qatar labor ministry admitted as much earlier this month when it pledged to significantly tighten oversight and increase the number of inspectors.

Qatar’s efforts to comply with calls for improved material conditions in a bid to resolve the issue and fend off the unions’ more political demands which touch on the viability of a tiny minority of nationals to retain absolute control of a country in which the vast majority of its residents have no rights and are essentially viewed as guest workers are undermined by high profile labor disputes involving international soccer players.
In the latest incident, French-Algerian international Zahir Belounis, was advised earlier this month that he could leave Qatar after being banned from travelling for two years because of a dispute with his club, Al Jaish, which is owned by the Qatari military. To leave, however, he would have to sign a statement that would effectively force him to forgo two years of outstanding salary payments.

Qatar’s inter-meshed commercial and political interests are also under attack in Egypt where the toppling in July of the elected Qatar-backed Muslim Brotherhood government of President Mohammed Morsi has soured relations between Mr. Morsi’s military backed successors and the Gulf state. The Egyptian Radio and Television Union, which controls state-owned broadcasters, effectively abrogated an agreement under which Al Jazeera, the state-owned Qatari television network, had bought the exclusive rights to African soccer championship matches.

“We will not observe the rights of Al Jazeera or abide by any judiciary provisions issued in its favor, since it has not respected the decision of Egyptian judiciary system and continued the activities of Al Jazeera Live Egypt in Egypt. This will not be limited to the Ghana-Egypt game, but will also include any game the Egyptian television wishes to broadcast. No one will be able to stop us,” said the union’s head, Essam al-Amir.

Mr. Al-Amir was referring to the banning of Al Jazeera’s local affiliate because of its alleged support for the Brotherhood. Al Jazeera has vowed to sue the union for its broadcasting of a recent African championship match between Egypt and Ghana in violation of the Qatari broadcaster’s rights to the game. Qatar’s troubled relations with Algeria were reflected in a similar dispute after Algerian television broadcast a match of its national team against Burkina Faso in violation of Al Jazeera’s rights.

Egypt last month, in a further indication of souring relations, returned to Qatar $2 billion after the two countries failed to agree on terms to convert the Qatari deposit in the Egyptian central bank into a bond.

Qatar’s efforts to use sports as a pillar of its soft power and a key building block in its foreign, defense and security policy in the absence of the ability to create the hard power it would need to defend itself are further undermined by perceptions that it is backing jihadist groups in the civil war in Syria. “Qatar, noted for its ‘hyperactive’ foreign policy, is so eager to acquire clients in the region that it has shown little concern for these groups’ intensely Islamist principles,” said Foundation for Defense of Democracies senior fellow David Andrew Weinberg in a recent CNN commentary.

James M. Dorsey is a senior fellow at the S. Rajaratnam School of International Studies, co-director of the University of Würzburg’s Institute for Fan Culture, and the author of The Turbulent World of Middle East Soccer blog.
Egypt FIFA Islamists Qatar World Cup 2022