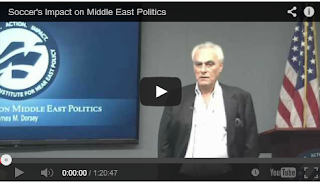 On October 15, James Dorsey, a syndicated columnist and author of the blog (and forthcoming book) "The Turbulent World of Middle East Soccer," addressed a Washington Institute Policy Forum. The following is a rapporteur's summary of his remarks.

Over the past several years, soccer fields across the Middle East and North Africa have become battlegrounds for political, gender, and labor rights, as well as issues of national, ideological, and ethnic identity. Examining the recent and historical role of militant soccer fans in Egypt, Jordan, Iran, and other countries can help shed light on where each society stands on these issues today.

Most soccer clubs in the region were established with some kind of political or ideological leaning, whether pro-colonial, pro-monarchy, nationalist, or other. In Egypt, two such clubs have had tremendous influence -- al-Ahly and Zamalek. The former was home to students who later became revolutionaries; President Gamal Abdul Nasser himself eventually led the club. In contrast, Zamalek was associated with pro-monarchy and pro-colonial movements. Today, the demography of the two fan bases has hardly changed. For example, celebrated Egyptian player Ibrahim Hassan described Zamalek as the "King's Club" in a 2010 interview, despite being born years after the overthrow of Egypt's last monarch.

The soccer pitch can also be a barometer of future events. In Jordan, statements openly critical of the royal family's corruption first gained notoriety on the soccer field. And at Saudi soccer matches, many princes are booed, pelted with various objects, and sometimes forced off the pitch entirely. Last year's removal of the head of the Saudi Arabian Football Federation was perhaps the first time a royal family member was forced to resign from a post due to public pressure.

Although soccer players themselves rarely engage in political protests, the sport evokes the kind of emotion that can spark such actions. In Iran, Tabriz's main soccer club has been a major symbol of Azerbaijani ethnic identity; most recently, it was the driving force behind demonstrations demanding reunification of Iran's East Azerbaijan province and the former Soviet republic of Azerbaijan. In Tehran, a ceremony held to commemorate deceased player Nasser Hejazi, who had been openly critical of President Mahmoud Ahmadinejad, turned into a mass antigovernment demonstration. Moreover, Iran's presidential elections often fall around the same time as its final World Cup qualifying matches; in some cases, celebrations of national team victories have led citizens to break social codes and hold antiregime protests.

Jihadist and theological leaders in the region look to soccer as a rallying tool well. Many Islamist mosques are affiliated with specific clubs, and militant figures such as Usama bin Laden, Hezbollah leader Hassan Nasrallah, and Hamas leader Ismail Haniyeh understand the role that the sport has played in recruiting followers and facilitating bonds between those who later carry out violence. At the same time, strong disagreement persists between hardline Islamist groups as to whether soccer is sanctioned under religious law. On one hand, Egypt's Muslim Brotherhood considered forming its own club in 2011, while Hezbollah and other groups own and operate teams in Lebanon. On the other hand, the Somali group al-Shabab has been known to execute people just for watching soccer matches.

The sport has also been an important battleground for women's rights. Saha al-Hawari, the daughter of an Egyptian referee, worked to break down regional opposition to women's soccer by convincing families, clubs, and governments to allow women to organize their own teams. She also partnered with Jordan's Prince Ali in convincing the member states of the West Asian Football Federation to declare that women had an equal right to pursue soccer as a career.

RISE OF THE ULTRAS IN EGYPT

Around 2004-2006, passionate soccer fans in the Middle East connected with like-minded groups around the world who embraced absolute commitment to their clubs. These fans, called Ultras, saw players and coaches as opportunistic or corrupt; this and other factors spurred them to develop an especially strong sense of ownership over their clubs.

The growing influence of the Ultras challenged the power of some regimes, but also presented them with opportunities. Leaders such as Ahmadinejad, former Egyptian president Hosni Mubarak, and former Tunisian president Zine al-Abidine Ben Ali sought close public association with national teams in order to harness their massive popularity. Mubarak in particular used the sport to deflect attention from government mismanagement and manipulate national emotions.

Meanwhile, Egypt's Ultras defiantly claimed ownership over their clubs, and by 2007, they were clashing with security forces on a weekly basis, whether at the stadium or elsewhere. By 2011, they represented tens of thousands of undereducated, unemployed young men who resented the regime and saw an opportunity to respond. Once the revolution began, Ultras played a key role in breaking the barrier of fear for the masses -- they approached Egyptians who had never spoken out against the government, brought them to demonstrations in Tahrir Square, and pressured them to remain once security forces cracked down.

Following Mubarak's ouster, the Ultras lost much of their public influence. Yet the February 2012 stadium brawl that killed seventy-four in Port Said reignited empathy toward the Ultras, sparking revolts in cities along the Red Sea and Suez Canal.

While other nations tend to bid on hosting the World Cup in order to project influence, create opportunities for their citizens, and improve infrastructure, Qatar's focus in seeking the 2022 Cup was security. After Iraq's 1990 invasion of Kuwait, Qatar learned that it could not rely on the Saudi defense umbrella. And despite importing massive amounts of weapons and foreign personnel to staff its armed forces, the small emirate still lacks the hard power needed to defend itself. Soccer therefore represents a valuable soft-power tool and a boon to national security.

Yet Doha's successful World Cup campaign has been subjected to intense scrutiny. Although the country has major domestic issues, especially regarding labor, much of the controversy surrounding its bid has stemmed from envy and prejudice. Qataris did not expect the deluge of criticism they have received. After all, many in the international community remained silent for years regarding concerns about foreign workers in Qatar; powerful international trade federations did not truly assert themselves until after the country's bid gained momentum. In any case, the emirate is attempting to address these labor concerns, partnering with source countries such as Sri Lanka and Bangladesh to make sure migrants are not being exploited by middlemen.

Meanwhile, dismal attendance in Qatari soccer stadiums has prompted discussion of reform. Knowing that they are only temporary residents, the country's numerous foreign workers are less likely to become passionate fans, and many citizens are uninterested in supporting government-owned soccer clubs. This has spurred talk of transferring ownership from the state to publicly held companies. More broadly, the Qatari government is perhaps the first to try building a complete sports industry -- including sports medicine and sports security -- from the ground up. In doing so, it has tied sports to the emirate's burgeoning national identity.

The reforms being contemplated in Qatar may eventually spread to other Persian Gulf states with similarly unsustainable demographic challenges. For now, though, soccer's role in the Gulf will continue to create controversy. For example, FIFA may have erred in appointing Bahrain's Sheikh Salman bin Ibrahim al-Khalifa as president of the Asian Football Confederation despite his crackdown on athletes who participated in antigovernment protests. Yet there were really no good alternatives for the position.

This rapporteur's summary was prepared by Jeremy Brinster.