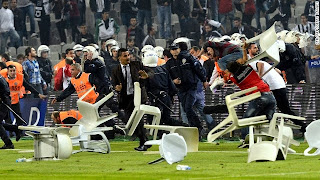 Turkish soccer pitches have reasserted themselves as political battlefields following the death of a protester and the emergence of pro-government football support groups in the wake of mass anti-government demonstrations in June.

The revival of the soccer battlefield signals the initial failure of government attempts to regain political control of the pitch by imposing restrictions on political expression during matches, tacitly supporting  pro-government support groups, legal actions against anti-government fans and a public affairs campaign that projects protest as a precursor of terrorism.

Clashes during an Istanbul derby this weekend between rival fan groups as well as with the police cemented soccer’s role in Turkey’s political power struggles, fuelled suggestions that the government was employing its football support groups to create pretexts for further measures against Carsi, the militant left wing fan group of storied Istanbul club Besiktas JK and strengthened allegations that its rival Galatasaray FC may have played a murky role in a match-fixing scandal.

Police arrested 68 fans this weekend after supporters stormed the pitch during the extension of a home match between Besiktas and Galatasaray. The detainees were later released after being slapped with a one-year ban on attending soccer matches. The clashes erupted after a referee handed a red card to Galatasaray player Felipe Melo and ordered Besiktas coach Slaven Bilic off the field. In response, fans stormed the pitch.

Members of 1453 Kartallari (1453 Eagles), a religious Galatasary support group named in commemoration of the year that Ottoman Sultan Fatih the Conqueror drove the Byzantines out of Constantinople, shouted ‘God is Great,’ and attacked Carsi supporters, who played a key role in the Gezi Park protests in June against Islamist prime minister Recep Tayyip Erdogan. 1453 is believed to have ties with Mr. Erdogan’s ruling Justice and Development Party (AKP). 1453 spokesman Fırat Aydınus denied that his group had links to the AKP, but conceded that none of its members were arrested in connection with the clashes.

"These events were orchestrated. Melo is not the reason, he was only the means [of provocation]," Carsi said on Twitter. Opposition Republican People’s Party (CHP) deputy Sezgin Tannkulu has asked Mr. Erdogan to advise parliament whether his government was waging a campaign of intimidation against Carsi.

The incident in Istanbul’s overcrowded Ataturk Olympic Stadium followed on the heels of last week’s anti-government protests in Kadikoy on the Asian side of Istanbul which is home to Fenerbahce, Turkey’s most popular club. Fenerbahce fans led the protests that were sparked by claims that a police tear-gas canister had killed 22-year-old Ahmet Atakan during demonstrations in early September in the southeastern city of Hatay.

The clashes during the Besiktas Galatasaray match served to widen the gap between Besiktas’s pro-government management and its anti-government fans, 20 of which were indicted earlier on charges of being members of an illegal organization for their alleged role in the protests in June against government plans to replace Gezi Park on Istanbul’s iconic Taksim Square with a shopping mall. The 20 face up to 15 years in prison under Turkey’s draconic laws against organized crime. The government has denounced protesters, including members of Carsi who united rival soccer fan groups in confronting law enforcement.

Interior minister Muammar Guler said the government would prosecute whoever had been caught on security cameras in the stadium. Deputy Prime Minister Bulent Arinc warned that "radical measures will have to be taken to ensure that such events do not occur again."

The government last month banned the shouting of political slogans in stadia and ordered clubs to force spectators to sign a statement that they would abide by the ban. Soccer fans said the clubs had found it difficult to impose the signing of the pledge.

Government plans to replace private security companies with police in stadia have been stalled by opposition by European soccer body UEFA and world soccer governor FIFA who are against an overbearing police presence in stadia. The government insisted however that plainclothes policemen would mingle with militant fans during matches and that their activities on social media would be monitored. Fans demonstratively violate the ban by chanting political slogans in the 34th minute of this season’s matches. Istanbul license plates start with 34.

Critics charge that the ban targets opponents of Mr. Erdogan, a former semi-professional soccer player, who dons the scarf of Kasimpasa SK, the local Istanbul club in the neighborhood where the prime minister grew up, during pro-government rallies. Kasimpasa named its stadium after Mr. Erdogan. Mr. Erdogan often likes to address crowds in stadia which government officials argue does not violate the ban that applies only to matches, not to stadia in general.

With its own stadium being renovated, Besiktas is playing in a twist of irony its home matches in Kasimpasa’ Recep Tayyip Erdogan Stadium. Carsi members unleashed a torrent of anti-government slogans in their opening match in the stadium, prompting state-owned and pro-government television channels to mute the sound of the protests. “We stand for fairness and justice. Nothing will stop us from upholding our principles,” said a Carsi member.

The government’s restrictive measures were accompanied by a campaign by the Anti-Terrorism Office and the police warning that protests were the first step towards terrorism. They issued a 55-second video featuring a young woman demonstrator-turned suicide bomber warned the public that “our youth, who are the guarantors of our future, can start with small demonstrations of resistance that appear to be innocent, and after a short period of time, can engage without a blink in actions that may take the lives of dozens of innocent people.” Throughout the video, the words ‘before it is too late’ are displayed.

Scores of fans believed to be members of 1453 scaled barricades and stadium walls to attend the Besiktas Galatasaray match. Recently amended Turkish Football Federation regulations bar supporters of a visiting team from entering the host stadium during a derby. “We have to learn that football is a game. When I came here and saw the crowd, I got goose bumps. Let’s turn football into a festival,” said TFF vice chairman Ufuk Ozerten after last weekend’s derby.

Political scientist Dogu Ergil, speaking to Zaman newspaper that is owned by Mr. Erdogan’s Islamist rival, self-exiled preacher Fethullalh Gulen, said mounting tension on the pitch was the result of delays in deepening Turkish democracy. "Society is frustrated due to the arrested development of democracy, and frustration triggers violence. Since there are no other outlets to express one's frustration, this is what happens," Mr. Ergil said.

He said successive governments, including that of Mr. Erdogan, approached democracy as a form of tutelage rather than a participatory system. "Whichever group dominates the state, it puts this system of tutelage to work. But democracy is a culture of compromise, and imposing one's opinions on others leads to frustration …  Governments in Turkey are not here to govern but to give orders," Mr. Ergil said, pointing to the ban on political slogans in stadia.

Mr. Ergil used Mr. Erdogan’s intervention last year to ensure that those implicated in a massive match fixing scandal that constituted the backdrop to a power struggle between the prime minister and Mr. Gulen would be treated leniently as an example. "There are no rules in Turkey. There is only [government] power. And things transpire the way they want them to,” Mr. Ergil said.

Koray Caliskan, a political scientist at İstanbul's Bosporus University added that Mr. Erdogan defines democracy as a ‘ballotocracy,’ a system in which the winning party caters to its followers with no regard for other segments of society. “Erdogan criminalizes every act. He accused Kurds on a hunger strike of eating kebabs; he demeaned those who protested at Gezi as thugs. He treats legitimate and democratic protests as a crime. Non-political spheres are politicized as democracy weakens, People first take to the streets, and then when that is suppressed, to the stadiums," Mr. Caliskan said.