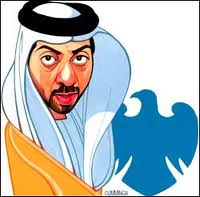 The recent sentencing in the United Arab Emirates of scores of dissidents on charges of plotting to overthrow the government and UAE support for the military coup that ousted Egyptian president Mohammed Morsi has sparked assertions that the country is using its acquisition of Manchester City and a franchise to establish a New York-based Major League Soccer team to polish an image increasingly tarnished by autocratic and counterrevolutionary policies.

Human Rights Watch (HRW) in statements to The Guardian newspaper warned that the UAE was using soccer to launder its image. Former English Football Association chairman Lord Triesman has called for making a country’s human rights record one of the criteria for establishing whether a state entity or member of a ruling family passes the "fit and proper person test" for ownership of a Premier League club.

HRW along with Amnesty International, the Emirates Centre for Human Rights and prominent human rights lawyers and activists like Sir Geoffrey Robertson condemned the mass trial of 94 people of which 69 were sentenced to lengthy prison terms as unfair and a violation of due process because a denial of legal assistance while being held incommunicado pretrial, allegations of torture, and the lack of a right to appeal. In its response, the UAE justice ministry implicitly did not rule out torture, arguing that alleged victims should have reported abuse to the police.

The defendants, who include lawyers, teachers and academics, were accused of being Muslim Brothers. Deeply hostile to the group, the UAE backed the military coup against Mr. Morsi that has thrown Egypt into crisis and has since together with Saudi Arabia and Kuwait bankrolled the military-appointed successor of the ousted president. The backing was part of a larger Saudi-dominated effort to stymie the wave of protest and revolt that has been sweeping the Middle East and North Africa for more than two years. The Brotherhood last week rejected a mediation attempt in Egypt by a senior US official as well as the foreign ministers of the UAE and Qatar, the only Gulf state to back the group.

HRW researcher Nicholas McGeehan, describing the UAE as "a black hole" for basic human rights, told The Guardian that "In this situation, a Premier League club (Manchester City) is being used as a branding vehicle to promote and effectively launder the reputation of a country perpetrating serial human rights abuses. That should be of concern to football supporters as well as human rights organizations." The paper quoted Human Rights Watch as saying further that Abu Dhabi’s purchase of Manchester City enabled it to "construct a public relations image of a progressive, dynamic Gulf state, which deflects attention from what is really going on in the country".

The portrayal of acquisitions of prominent soccer clubs as an effort to launder a country’s reputation casts a shadow over a foreign and security policy as well as a soft power strategy deployed by both the UAE and Qatar that is designed to endear themselves to a Western public and embed themselves in the international community in a way that would ensure support in times of need. Both countries recall the success of Kuwait, another small Gulf state incapable of defending itself, in rallying the international community in 1990 and 1991 to force the withdrawal of invading Iraqi forces.

The linking by human rights activists of the acquisition of Western soccer clubs to the human rights record of the home countries of a buyer is closely linked to the emergence of mega-events like the World Cup which will be hosted by Qatar in 2022 as platforms for campaigns for human, labor and gender rights.

In addition to the World Cup, Qatar has bought Paris St. Germain while its state-owned global broadcaster, Al Jazeera, has secured rights for the Premier League as well as the French and the Italian soccer competitions. The network has further launched a sports network in the United States and is about to launch a 24-hour US-based news channel.

UAE officials have insisted that the acquisition of Manchester City as well as this year’s agreement to invest in the creation of a 20th Major League Soccer team was a personal rather than a government investment. Most analysts however, given the al-Nahyan’s grip on state affairs, take that assertion with a grain of salt. Manchester City has won since the acquisition sponsorship from major Abu Dhabi or UAE state institutions, including airline Etihad, telecommunications company Etisalat, investment company Aabar and the Abu Dhabi Tourism Authority.

Neither the UAE nor Qatar initially realized that the deployment of soft power using soccer would also entail that they would become more vulnerable to criticism of their adherence to human and other rights. So far, Qatar, despite foreign policy setbacks as a result of its backing of the Brotherhood and other Islamist forces, has proven more adept in deflecting the criticism, particularly on the issue of the rights of foreign workers, who constitute a majority of the population in both countries.

The Gulf state has until now been able to fend off demands by international trade unions that it allow the formation of independent workers’ organizations and endorse the principle of collective bargaining by taking far reaching steps to improve material working and living conditions. Qatar Foundation, a state-owned body focused on education and research, has adopted rules that oblige contractors to pay a worker’s ticket to Qatar from his or her home country and give employees three weeks’ vacation a year. Qatar is also looking at an overhaul of the recruitment system that would shield workers from becoming indebted to agents who charge exorbitant fees. The UAE and other Gulf states have sought to reform their foreign labor system, but to a lesser extent than Qatar.

James M. Dorsey is a Senior Fellow at the S. Rajaratnam School of International Studies as Nanyang Technological University in Singapore, co-director of the Institute of Fan Culture of the University of Würzburg, and the author of the blog, The Turbulent World of Middle East Soccer.