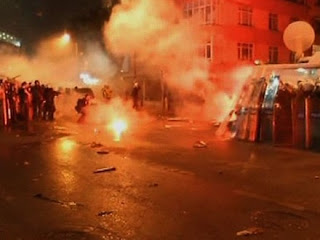 Turkish interior minister Muammer Güler has banned the chanting of political slogans during the country’s next soccer season in a bid to reign in militant football fans who played an important role in mass anti-government protests in June.

The ban follows the recent indictment of 94 protesters, 20 of whom are members of Carsi, the influential militant support group of storied Istanbul club Besiktas JK. The soccer fans have been charged with membership in an illegal organization.

“We are adding bad political and ideological slogans to the list of illegal demonstrations in football stands, or behavior not complying with sporting ethics,” Mr. Güler told an Istanbul sports conference.

He said plainclothes policemen would be deployed in those areas of stadiums where militant soccer fans gather and that a tender for the installation of cameras would be issued in the near future.

The minister said the ban was an implementation of Law No. 6222 known as the Law on Violence in Sports which went into effect in 2011. The law outlaws “any slogans exceeding the limits of sports.”

Mr. Güler said that it was “clear that political and ideological slogans do not comply with sport’s spirit. That includes profanity or non-sporting behavior. The rules are related to all of those.”

Mr. Güler said that more than 4,000 soccer fans had been investigated since the law came into effect, 2,000 of which had been banned to avert violence. “The controls will be more effective in the future,” he said. He added the government was building a databank of those charged with sports crimes.

Carsi joined forces in June with supporters of Istanbul arch rivals Fenerbahce and Galatasary to initially protect environmental protesters opposed to the destruction of a historic park on the city’s iconic Taksim Square against a heavy-handed police crackdown. The street battle-hardened fans confronted security forces as the protest mushroomed into massive demonstrations against Islamist Prime Minister Recep Tayyip Erdogan’s haughty and majoritarian style of government.

Officials said the ban was particularly urgent because Besiktas would be playing its home games in Istanbul club Kasimpasa SK’s Recep Tayyip Erdogan Stadium while its own stadium is under renovation.

Mr. Güler said Besiktas would be obliged to force spectators to sign a pledge not to chant political slogans before they would be allowed to attend a match. Failure to abide by the pledge could result in cancellation of season tickets.

The ban and the charges against Carsi reflect Mr. Erdogan's attempts to criminalize the fans and the protesters in a bid to cater to a traditionalist and conservative base and distinguish himself from the more modernist façade of his Islamist rival, Fethullalh Gulen, a powerful, self-exiled, 76-year old imam with a strong popular and media base and influence in state institutions like the police and the judiciary.

Mr. Gulen, shared Mr. Erdogan's criticism of the protesters and blaming of international media but in contrast to the prime minister quickly backed away from denouncing them as vandals and foreign agents. Instead he urged his followers not to underestimate the grievance underlying the protests and to accept that his movement as well as the government had not done enough to resolve social problems.
At the same time, he sought to drive a wedge between the protesters by praising the original peaceful environmentalists demonstrating against the cutting down of trees in Taksim's Gezi Park as opposed to violent protesters, a reference to the soccer fans.

James M. Dorsey is a Senior Fellow at the S. Rajaratnam School of International Studies as Nanyang Technological University in Singapore, co-director of the Institute of Fan Culture of the University of Würzburg, and the author of the blog, The Turbulent World of Middle East Soccer.
Besiktas Fenerbahce Galatasaray Turkey Ultras