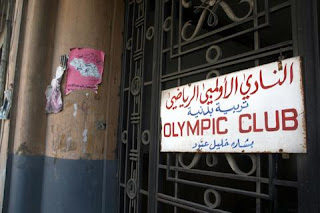 As Lebanon, a country in which almost every facet of life is defined by sectarian fault lines, teeters in the shadow of civil war in next door Syria, the country is also being rocked by multiple mushrooming sports scandal.

Months after a massive soccer match-fixing scandal became public and three international Lebanese referees were detained in Singapore for accepting sexual favors, Lebanon’s basketball team was this month forced to return home from the Philippines after the International Basketball Federation (FIBA) banned it from participating in international competitions. The ban was the result of political interference in a dispute in the Lebanese basketball association.

The scandals dashed government hopes that sports could help it maintain a sense of national unity inspired earlier this year by initial soccer successes in 2014 World Cup qualifiers – a tall order in a country of four million that is divided among 18 Muslim and Christian sects, scarred by 15 years of civil war that ended with a fragile peace in 1991 and whose largest political grouping, Hezbollah, has sided militarily with the embattled regime of Syrian President Bashar al-Assad.

They also are to Beshara Abboud, the owner of a historic Beirut gym that was closed and torn down, a symptom of the decline of Lebanese sports. “There is no sport in Lebanon now. I am in the boxing federation, and we struggle to find people to train, to play,” he told The Daily Star.

Political interference, the soccer scandals coupled with the ban on the basketball team, competition from state-of-the art health clubs, the commercialization of sports were the death of his gym and increasing incidents of doping, Mr. Abboud said. “In ’98, we went to a bodybuilding competition and I couldn’t believe it [the widespread use of steroids]. I told my team they could stop if they wanted, win or lose, this is not our place. We stopped after that, the steroids are too much,” he said. As the building of his gym is replaced by an apartment block, he adds: “Now it is at the end.”

Originally operated by his father Khalil, a soccer, player, the gym served as a training facility during World War Two for soldiers being dispatched to North Africa as part of the French military. The gym’s popularity prompted Lebanon’s Christian Kataeb Party, whose headquarters were nearby to assist in replacing the gym’s tent with a more permanent structure. The Kataeb withdrew when the gym started attracting people from other sects.

American University of Beirut political scientist Danyel Reiche describes professional sports and particularly soccer in Lebanon in an essay in Third World Quarterly as the sector with the most “direct confrontation among the different sectarian and political groups“ because “whereas the political system prevents sects from competing with each other there are no separate sectarian (sports) leagues.” Quoting George Orwell, Mr. Reiche says Lebanese soccer amount to “war minus the shooting.”

The scandals kick started when the Asian Football Confederation (AFC) said in February that it was investigating the involvement of players and administrative staff of the Lebanese soccer federation in match-fixing.  In total, 20 players and an administrator were banned for life and fined $15,000 each.

The basketball scandal erupted in May when a Lebanese Basketball Championship quarterfinal match was cancelled between rivals Champville, which is backed by the Free Patriotic Movement of former president and Hezbollah ally Gen. Michel Aoun, and Amchit that is chaired by current President Michel Suleiman’s son and backed by the Mustaqbal movement that is headed by Suleiman and caretaker Minister Mohammed al-Safadi. The cancellation and awarding of the match to Champville was prompted by tensions caused by Suleiman’s armed bodyguards.

Rejecting the decision, Amchit violated the Lebanese association’s rules by filing a lawsuit against Champville and the Lebanese basketball governing body, which in turn prompted the international ban. Amchit is backed by several other clubs, including one from a neighboring that is headed by an ally of the president, another that is owned by the minister of finance and a fourth is in Beirut, that is affiliated with the country’s Sunni prime minister.

Amchit has since said it was dropping its lawsuit in the hope of FIBA lifting its ban after players protest against miring the sport with politics. The Amchit effort was thwarted when the club and its backers refused to sign a memorandum of understanding proposed by FIBA in which they would agree not to revert to the judiciary to settle disputes.

James M. Dorsey is a Senior Fellow at the S. Rajaratnam School of International Studies as Nanyang Technological University in Singapore, co-director of the Institute of Fan Culture of the University of Würzburg, and the author of the blog, The Turbulent World of Middle East Soccer.