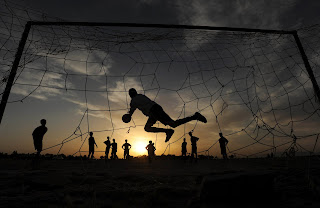 Soccer symbolizes Afghanistan’s choices coming full circle as US forces prepare to withdraw from the Central Asian nation more than a decade after they invaded it.

Back in late 2001 and early 2002, US troops fresh from overthrowing the Taliban viewed soccer balls and shoes as just as basic to mending Afghanistan’s social fabric as beams and girders were to mending war-damaged buildings. Soccer paraphernalia served as a tool to win hearts and minds and counter Iranian efforts to exploit the beautiful game for the same purpose.

Afghanistan Football Federation (AFF) president Keramuddin Karim backed by sociological analysis argues that "to establish peace and stabilize a country, one must not only focus on training soldiers. Sport is also a strong base for peace, as it embodies values such as unity, integration, pride and prevents racism, drugs and other elements that bring insecurity to the country."

Mr. Karim is taking a leaf out of the experience of other countries where sports in general and soccer in particular have had a cathartic effect by channeling human aggression away from violence and into more healthy channels. Nelson Mandela used a racially integrated national rugby team to unite South Africa in the wake of apartheid -- a story now made famous by the movie Invictus. South Africa went on to become the first African nation to successfully host the World Cup.

In a letter announcing the premier league that will include eight teams, the AFF said that it would cut “across all ages, socio-economic groups, regions and tribes.” In fact, it will cut across regions and ethnic, tribal and religious groups that have in the past been at loggerheads with one another.

Abdul Sabor Walizada, a trainer for the project and former national team players, said the AFF hoped that the league would also help stimulate business and build bridges. "After years of civil conflict and war, people will focus on football and the businessmen from each zone will try to have the best players. It will create national unity because if the central zone, for example, has a really good player, the southern zone team will want to buy him. They will not care about his ethnicity. They will not care about his tribe. They will care that he is one of the best players,”Mr. Walizada said.

The launch of the premier league comes among fears that the Afghan army will split along ethnic and sectarian lines following an American withdrawal, plunging the country into chaos with the Taliban stepping up its insurgency and various groups that fought each other in the past picking up arms again.

US military and civilian officials believed a decade ago that reopening soccer stadiums and encouraging people to play free of fear or persecution would win hearts and minds among those scarred by regimes for which soccer was either the enemy or a weapon of terror. The premier league is one way of putting that to the test.

US-led international forces played shortly after their overthrow of the Taliban an Afghan team in Kabul’s Ghazi Stadium to highlight the change they were bringing to the war-ravaged country. Last December, Afghan leaders together with US ambassador Ryan Crocker and the US commander in Afghanistan, Gen. John Allen, attended the festive opening of Kabul’s completely refurbished 25,000 seat Ghazi stadium to highlight progress from the days that the Taliban used it for public executions amputations of limbs.

The hope now is that the new league’s eight teams who represent different parts of the country with a history of being at loggerheads with one another will compete on the pitch instead of the battlefield once US forces have left despite the fact that some of them bear the names of fiery birds: the Eagles of the Hindu Kush in central Afghanistan, the Goshawks from southeastern Afghanistan and the Falcons of Kabul.

The recruitment of players also serves the effort to bridge the country’s fault lines. Selection takes place on a reality television show, Maidan e Sabz or Green Field, for which thousands of Afghans have applied.  The audience of each show selects 18 out of 30 candidates whose performance is judged by a group of former Afghan national team players and coaches who pick 15 players while the studio audience votes for the final three.

The reality show broadcast from six cities, including Kabul, Jalalabad and Mazar-e Sharif, is intended to involve from day one a once soccer-crazy public that failed to embrace recent amateur leagues. Soccer enjoyed enormous popularity until 1979 when the Soviet invasion of Afghanistan spawned fierce resistance followed by a civil war once the Soviets withdrew.

"We are doing (player selection) on TV so that people can know the players. They will be famous thanks to the reality show. This will help us to promote football," said AFF board member Sayed Ali Reza Aghazada.
League matches broadcast on Afghanistan’s two main television channels will be played in September and October. Sponsor Roshan predicted that the league would be a "unifying institution" a Afghanistan.