A camera pans over a half empty and fully solemn Old Trafford. Mother’s are talking to their kids, lone men are checking their blackberries, and half time is drawing to a close. The Emiratis and Uruguayans jog out in their respective red and black and blue and white kits. The South American side is replenish with top European talents; Edinson Cavani, Luis Saurez, and Gaston Ramirez all hail from the small landlocked country on the River Plate. Cavani in particular has been tagged by Aurelio de Laurentis, the president of his club, Napoli, as the 100 million Euro man. That exorbitant number would far exceed the market price of the Emiratis, whose team is largely composed of unknown variables, hidden by the limited extent of scouting networks in the desert. In the middle of Old Trafford, their captain, number 10 Ismail Matar, receives the ball with elegance, places the ball on his right foot, looks at the oncoming keeper, slides the ball to the right, and places the ball in the lower left corner, crowning the wonderful ball from Abdulrahman. The unacquainted commentators seem surprised at the quality of his technique, which surely a product of the growing football training facilities of a country that has gone football crazy. 4,655 miles away an oil field cooks in the sun, new buildings are erected, and a round ball is kicked. Football has quickly become a headline in the United Arab Emirates.
Academies and schools have started to pop-up across the country. In the past 3 years alone new schools from Inter-Milan, Manchester United, and Manchester City have all taken in crops of local tutelages. The infrastructural development might seem to be rapid, but for Matar the growth has been a long time coming. He appeared on the football world’s radar as a 20 year old when he won the Golden Ball at the 2003 Fifa Youth Championships in the UAE. It was the first major tournament the country had hosted. Receiving that honor meant that his performance was ranked above well-known names like Andres Iniesta, Fernando Cavenaghi, and Nilmar, European clubs, namely Chelsea, came shopping, but his club Al-Ain would never release him. In an eye-opening interview with Ashley Hammond of the Gulf News, Matar said “I don’t look to the past because you can’t return back there, I focus on the future and I’m thankful for what I’ve achieved. I don’t know if I had a chance to play abroad, but I always believe in myself and that’s the most important thing.”
He’s takes a less conciliatory approach towards the new crop of talent coming up in the country, suggesting that they also “have that quality to play in Europe”, but that they need to work on their drive to succeed as footballers abroad because “nobody will help you over there, you have to depend upon yourself. It’s not like how they deal with us here, whereby if you don’t work nobody will question you”

“Call me Ishmael.” That first line from the narrator of Moby Dick is one of the most famous sentences in literature and proves to be an aptly symbolic name Matar. The name reflects the Islamic tradition of the oil state; Muhammad is, after all, a descendent of the lineage of Ismail (eldest son of Abraham), but also reflects the enrapturing effect of oil on the country, as seen in Herman Melville’s iconic work, Moby Dick. The interview with Matar seems to portray him as a narrator of change in the UAE, he came too early to be “the one”, but he was still the first and that experience matters.
The dream of the United Arab Emirates as a football power has been similar to Melville’s whale, the beacon to which the countries sporting billionaires are flocking. The recent, swift, and rude debacle of Malaga’s sheikh, Al-Thani, pledging to run from the club he poured a quick €100 million into must have been a PR nightmare for the other owners at Paris St. Germain and Manchester City, who have, to this point, been the definition of stable. The Manchester City group, led by Khaldoon Mubarak and Sheikh Mansour, have not only elevated their football team to the upper echelons of Europe, but they have also become invested in the surrounding area, implementing “The Eastlands Community Plan”, and, in doing this, have tried to make the UAE a visible actor towards positive change and better business in Manchester. They are certainly at least raising suburban property values, now they just need to bring in some restaurants for Tevez.
The shift towards a visible asset like football is inline with the broader movement (exhibited by the massive growth of Abu Dhabi and Dubai) of the country’s elite to diversify their assets and investments in order to ensure that their family’s power extends well beyond their ever-depleting oil reserves. The UAE is the 116th largest country and has the same population as New York, it is also one of the top-20 countries in terms of trade. Some consider the country’s capricious and extravagant spending to be…well…capricious and extravagant, but it is much more calculated than one would initially think. Dutch disease, over-dependence on one resource, has been the death of many a country, but it will not fell the United Arab Emirates. Over the past 10 years, attempts at diversification have reduced the value of oil and gas to only 38% of the economy and analysts predict that aluminum, steel, iron, and textile production will surpass their energy income in the next 50 years. They have appropriated their material wealth to the hope of growth, and no other industry makes this more obvious than football. 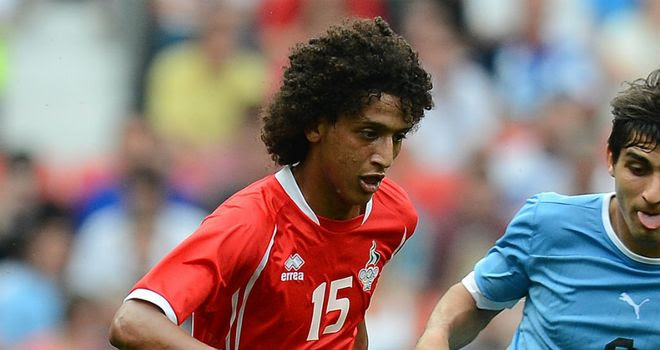 It is now two weeks after the Uruguay and UAE match and one of the team’s biggest stars, Omar Abdulrahman, is at Manchester City’s Carrington training ground, trialing for Roberto Mancini’s side. The player affectionately referred to by teammates as “Noodles” represents the new wave of extremely talented Emiratis and the country’s football chiefs have a decision to make: Will they let their domestic players leave to experience greater pastures and increase exposure for the quality coming out of the country? Or will they keep them in the United Arab Emirates and try to grow the domestic league? There seems to be no easy answer to this question, but the arrival of stars like Raul and Asamoah Gyan seems to suggest that football will not be disappearing anytime soon.
Perhaps Paul Shepard was speaking to the future of football when he proclaimed, “the desert is the environment of revelation”?
John Ray is a football writer and a student at Pitzer College in Claremont, California, who authors the blog, unseengame.tumblr.com.