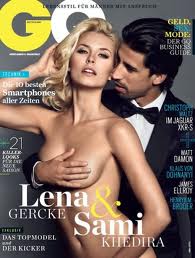 Revealing pictures sparks journalist arrests and fuels debate on political Islam
By James M. Dorsey
This week’s arrest of three Tunisian journalists for publishing a revealing picture of a Tunisian soccer player with his girlfriend has deepened secular distrust of Tunisia’s Islamist-led post-revolt government and fueled debate in the Middle East and North Africa and beyond about the true intentions of Sunni Muslim Islamist parties that are emerging as victors from the Arab revolt.
The three journalists, the first to be detained since mass demonstrations toppled President Zine el Abedine Ben Ali a year ago, were arrested on orders of the public prosecutor for publishing a picture of Tunisian-German Real Madrid midfielder Sami Khedira dressed in a tuxedo with his hands covering the breasts of his otherwise naked German model girlfriend, Lena Gercke.
The three journalists – Attounisia newspaper publisher Nasreddine Ben Said, editor-in-chief Habib Guizani, and foreign editor Hedi Hidhri – are being held on charges of offending public morality.
Their arrest has focused the immediate debate on Islamist intentions on the threat of a media crackdown to ensure that publishing adheres to religious morals as defined by the country's new Islamist rulers. It follows the pressing of charges against a local television channel for showing Persepolis, a film whose animated depiction of God outraged conservative Salafi Islamists who propagate a .return to the 7th century way of life in the time of the Prophet Mohammed.
Last month, hundreds of journalists demonstrated outside the office of the prime minister to demand an end to restrictions on media freedoms after the appointment of government officials and editors to state television positions.
Fears of a crackdown come a year after Tunisia’s popular revolt was liberated from Mr. Ben Ali’s tight censorship.
“The Islamists don’t like the media and are trying to control it,” says Ahmed Nejib Chebbi, the leader of the opposition Democratic Progressive Party. Mr. Chebbi, a proponent of replacing the Islamist Ennahada party led government with a national unity government.
“There is still place for other political forces, they just need to consolidate themselves.”
Mustafa Tlili, the founder of the New York-based Center for Dialogues and an advisor to United Nations General Assembly chairman Nassir Abdelaziz Al–Nasser of Qatar, charges that Islamists are hijacking the revolts staged by protesters whose “slogans were secular for freedom, liberty and dignity… Those that staged the revolution see it being stolen and hijacked…Tunisia’s environment is the Mediterranean and Europe. The Islamists discourse is to withdraw Tunisia from its natural environment and make it adopt Islamist values that are not those of the majority of Tunisians. They reject these values because they are not part of their daily life or vision of Islam,” Mr. Tlili says.
Messrs Tlili and Chebbi, speaking in Sochi, Russia at a Valdei Discussion Club meeting on the revolts sweeping the Middle East and North Africa, made their remarks days after five secular Tunisian political parties announced that they would merge into a single coalition in an effort to counter the moderate Islamist Ennahada party that last October won Tunisia’s post-Ben Ali election.
In a statement, Tunisia's journalists' union called for the "immediate release of all journalists and the rejection of intimidation against reporters." Thousands of Tunisians endorsed a campaign on Facebook in support of the journalists and to defend freedom of expression.
The government has repeatedly denied accusations it is seeking to stifle the media.
Ennahada officials acknowledge that they are fighting a battle to channel expectations of their rank and file and demonstrate their commitment to a pluralist, democratic society. In perhaps his last article before his sudden death of an asthma attack, revered New York Times correspondent Anthony Shadid quoted Ennahada official Said Ferjani said history would judge his generation not on their ability to take power but rather on what it did with power.
“I can tell you one thing, we now have a golden opportunity. And in this golden opportunity, I’m not interested in control. I’m interested in delivering the best charismatic system, a charismatic, democratic system. This is my dream,” Mr. Ferjani said.
James M. Dorsey is a senior fellow at the S. Rajaratnam School of International Studies at Nanyang Technological University in Singapore and the author of the blog, The Turbulent World of Middle East Soccer.
Islamists Tunisia