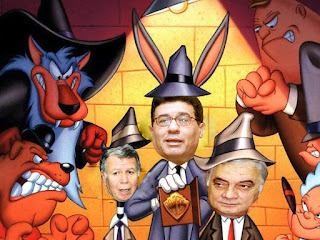 Dismal of EFA president Sami Zaher (bottom right): the beginning of a clean-up
By James M. Dorsey
A decision by Egypt’s Attorney General Abdel Meguid Mahmoud to bar fired Egyptian Football Association (EFA) president Samir Zaher alongside Port Said governor Ahmed Abdullah Ahmed, and the city’s security chief Essam el-Din Abdel Hamid Samak from traveling outside the country lays the groundwork for ending the domination of Egyptian soccer by Mubarak-era appointees.
In doing so, authorities would be meeting a key demand of the street-battled hardened ultras – highly politicized, well-organized, violence-prone militant soccer fans modeled on similar groups in Italy and Serbia – who have for days been seeking to storm the interior ministry in central Cairo in response to the soccer brawl in Port Said in which 74 people lost their lives.
Similar protests have erupted across Egypt in which at least 12 people have been killed in pitched street battles with security forces and hundreds more injured.
Mr. Mahmoud barred the three men from foreign travel pending an investigation into the violence in Port Said that erupted after a match in which the city’s Al Masri SC defeated crowned Cairo club Al Ahli SC. He also barred the Director General of the Central Security Forces of the Suez Canal Zone, Major General Abdul Aziz Sami Fahmy, Amr Ahmed Abdel Mawla Bakheet commander of security forces of Port Said, and Saad Muhammad Yunus Moawad, director of the Port Said Stadium.
Authorities, acting on Mr. Mahmoud’s instructions, further detained 52 suspects in the Port Said incident for 15 days pending investigation, and charged them with “premeditated murder and attempted murder and terrorizing citizens and setting fire to the facilities, bullying and destruction of public and private property.”
The ultras, revered and celebrated for their fearlessness, years of confrontations in Egyptian stadiums with repressive security forces and key role in fighting supporters of former President Hosni Mubarak during last year’s 18 days of protests that forced the president to resign after 30 years of the office, have since repeatedly demanded the resignation of Mr. Zaher and his board.
The government’s dismissal of the board and barring of Mr. Zaher from travel will not immediately satisfy the ultras attacking the interior ministry who are enraged by the violence in Port Said in the belief that the government and police were taking revenge on them. Nonetheless, it addresses one of their main concerns.
A series of recent disruptions of Egyptian premier league soccer matches by ultras of various clubs highlighted their determination to defy the EFA and force reform of the country’s governing soccer body.
With the disruptions, the ultras made good on their vow to defy an EFA crackdown on their club support tactics, which involve the use during matches of fireworks, flares, smoke guns, loud chanting and anti-EFA and government banners.
Ultras of Ismaili SC invaded Ismailia Stadium on January 28 at the beginning of a match against Masri, dubbed the Suez Canal derby, in defiance of an EFA decision that the game should be held behind closed doors because of fan misbehavior earlier in January during Ismaili’s game against Ittihad al-Shorta, the team owned by the police force, the focus of ultra hatred. Ultras White Knights (UWK), the support group of crowned Cairo club Al Zamalek SC, disrupted their team ’s match last November against the police team and last Friday against ENPPI, owned by a state-owned oil and gas company. The incidents forced in December the EFA on instructions of the interior ministry to postpone several matches.
In a statement on their Facebook page that has some 255,000 followers, the Al Ahli support group Ultras Ahlawy said at the time that its defiance served to deliver a message to “all remnants of the ousted regime” that they would not obey their “manipulated regime.” The statement laid out the ultras’ agenda. “The issue is bigger than football. We want to settle the score with remnants of the former regime, under the leadership of Samir Zaher, and their oppression of Egyptian youth,” it said.
In a similar statement, UWK said that “we suffered a lot from injustice and repression in the past, but we stood up to that with pride. We fought with all our might to maintain our principles and freedom. We thought justice and freedom would come after our revolution. We will continue in our defense of freedom even with our blood. Our war with the EFA will continue until we win and see the corrupt people in prison.”
Egypt’s military rulers last month signaled their awareness of the need for a reform of sports in general and soccer in particular with the replacement of the Mubarak-appointed heads of the national sports and nation youth councils.
The Muslim Brotherhood, which emerged as the winner of Egypt’s first post-Mubarak parliamentary elections and last year briefly toyed with the idea of launching soccer teams of its own, has moreover vowed to clean out the sports sector of Mubarak associates by removing the heads of associations. It said Mr. Zaher was the first of its targets.
Fans and clubs alike are certain to be happy to see the back of Mr. Zaher and his cohorts. But as a result of years of battle in stadiums, vicious street battles throughout the past year and the bloodshed in Port Said, they have set their sights much higher. The struggle for the interior ministry building is a battle of wills between a military-led government and its police force desperate to reassert its credibility and a determined street-battle hardened mass of militant soccer fans determined to thwart its designs. So far, the militants have demonstrated that they can stand their ground.
James M. Dorsey is a senior fellow at the S. Rajaratnam School of International Studies at Nanyang Technological University in Singapore and the author of the blog, The Turbulent World of Middle East Soccer.
Al Ahly (Egypt) Al Zamalek EFA Egypt Ismaili