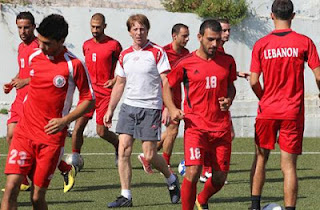 Lebanon's national team trains for crucial game against the UAE (Source: The Daily Star)
By James M. Dorsey
Soccer is rallying divided Lebanon scarred by years of bitter civil war at a time that Syrian President Bashar al-Assad’s sectarian-tainted brutal crackdown threatens to spill into the streets of Lebanese cities.
In a bid to build on Lebanese rallying around their flag in December after the Lebanese national soccer team defeated South Korea 2:1 in a 2014 World Cup qualifier, Education Minister Hassan Diab called this week on private and public schools to allow students to go home early on Wednesday so that they can cheer their squad as it plays the UAE in Abu Dhabi. A win against favourite UAE could guarantee Lebanon a spot in the fourth and final round of qualifiers for the Brazil World Cup.
In a country where almost every facet of life is defined by sectarian fault lines, Lebanon’s defeat of South Korea in December brought tens of thousands of fans into the streets of the Lebanese capital Beirut waving the country's red and white flag with a green cedar in the middle. Traffic came to a halt and for a moment sectarian differences that have deeply divided the country for decades were superseded by a sense of national pride.
"Sports can do what religion and politics can't, gather the Lebanese people around a common thing. The national team changed the point of view to many football fans, and it united them for one goal, to participate in World Cup 2014. This was a very good step to help people to leave their political and religious views behind and watch their team without reverting to riots or gang wars,” The Associated Press (AP) quoted Lebanese supporter Serge Mghames as saying at the time.
Just how fragile that sense of unity is was highlighted when earlier this month fighting erupted between supporters of Mr. Assad, and those who oppose his regime in the northern Lebanese city of Tripoli where a single street divides Jabal Muhsin, populated by members of the Syrian leader’s Alawite sect, from Sunni Muslims in Bab al-Tabbana who have close ties to their Sunni brethren across the border in Syria.
Three people were killed and many more were injured in 24 hours of fighting. Walls riddled with bullets and damaged buildings betray the intensity of the fighting.
The government hopes that a surprise defeat of the UAE could revive the soccer-inspired sense of national unity and prove stronger than sectarian animosity that is never far from the surface.
That however is a tall order in a country of four million that is divided among 18 Muslim and Christian sects and scarred by 15 years of civil war that ended with a fragile peace in 1991.
If the experience of Iraq whose national team became Asian champion in 2007 at a time that the country was wracked by sectarian bloodshed or Abbas Suan, a devout Palestinian Israeli Muslim who refused to sing the Hatikva, Israel’s national anthem, when it was played before a game but in 2006 united Israeli Jews and Arabs by securing with a last minute equalizer against Ireland Israel’s first chance in 35 years to qualify for a world cup is anything to go by soccer’s unifying effect is lost as soon as the team no longer performs.
The government’s effort is further complicated by the fact that sectarianism is so deeply rooted in the country’s game that the government banned fans from attending domestic league matches in the wake of the 2005 assassination of Lebanese Prime Minister Rafik Harriri and violent clashes between fans following the 2006 war between the Shiite Muslim militia Hezbollah and Israel.
The government lifted the ban on fans in October of last year, but by then the damage had been done. The ban devastated the game: its domestic league whose clubs are closely tied to sectarian and political interests all but collapsed and the national team was drained of potential talent. Clubs became financially even more dependent on their sectarian and political sponsors, allowing them to manipulate the game to their own ends.
The grip of sectarian and political sponsors is strengthened by the fact that corporate sponsors like Coca Cola are forced to simultaneously support Christian, Sunni and Shiite teams to avoid being accused of favouring one community above the other. As a result, Lebanon fell in world soccer body FIFA’s rankings from 125 to 178 but has rebounded to 111 with its defeat of South Korea.
"Politics came into football and destroyed it," said Rahif Alameh, secretary-general of the Lebanese Football Association, who dates the "death of football" to 2001, the year when the government intervened in a murky match-fixing scandal rather than the 2005 ban on fans. That was when Lebanon's political-religious leaders began treating the association as a pie to be carved up in line with Lebanon’s sectarian system of power sharing.
The Hariri family’s Future or March 14 Movement, for example, sponsors several clubs. Rafik Hariri’s purchase in 2003 of Nejmeh, Lebanon’s most popular team made it the last to succumb to sectarianism. The first non-Christian club to be founded in Lebanon, Nejmeh lost its Shiite Muslim fan base with the acquisition by Mr. Hariri. The former billionaire prime minister initially ventured into sports as a moneymaking venture, but later turned his teams into vehicles for consolidating his Sunni Muslim support.
"Football had just (become an extension) of politics. Everything in Lebanon is politicized, the air we breathe is politicized.,” Mr. Alameh said. 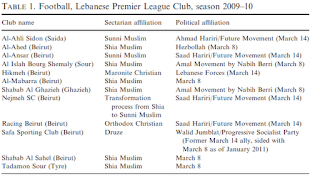 Source: Danyel Reiche, War Minus the Shooting? The politics of sport in Lebanon as a unique case in comparative politics, Third World Quarterly, March 2011)
Unconfirmed reports suggest that the various teams within a political block – the Hariri’s pro-Western and pro-Saudi March 14 Movement or Iran-backed Shiite militia Hezbollah’s pro-Syrian March 8 Movement – support each other by not fielding their best players when one of their associated clubs needs a win to progress in a championship or avoid being relegated.
American University of Beirut political scientist Danyel Reiche describes professional sports and particularly soccer in Lebanon in an essay in Third World Quarterly as the sector with the most “direct confrontation among the different sectarian and political groups“ because “whereas the political system prevents sects from competing with each other there are no separate sectarian (sports) leagues.” Quoting George Orwell, Mr. Reiche says Lebanese soccer amount to “war minus the shooting.”
James M. Dorsey is a senior fellow at the S. Rajaratnam School of International Studies at Nanyang Technological University in Singapore and the author of the blog, The Turbulent World of Middle East Soccer.
Lebanon Syria