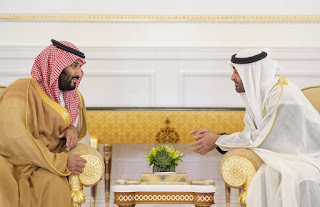 Personality as well as the conflation of genuine national interest with personal ambition contribute to the widening gap between Saudi Arabia and the United Arab Emirates.

It was only a matter of time before Saudi Crown Prince Mohammed bin Salman would want to come out on his own and no longer be seen as the protégé of his erstwhile mentor and Emirati counterpart, Crown Prince Mohamed bin Zayed.

By the same token, there was little doubt that the Saudi prince and probable next monarch would want to put to rest any suggestion that it was the UAE rather than the kingdom that called the shots in the Gulf as well as the wider Middle East.

No doubt, Prince Mohammed will not have forgotten revelations about Emirati attitudes towards Saudi Arabia and the UAE’s strategic vision of the relationship between the two countries that was spelt out in emails by Yusuf al-Otaiba, the UAE ambassador in Washington and a close associate of his country’s strongman, that were leaked in 2017.

The emails made clear that UAE leaders believed they could use Saudi Arabia, the Gulf’s behemoth, and its Saudi crown prince as a vehicle to promote Emirati interests.

“Our relationship with them is based on strategic depth, shared interests, and most importantly the hope that we could influence them. Not the other way around,” Mr. Al-Otaiba wrote.

In a separate email, the ambassador told a former US official that "I think in the long term we might be a good influence on KSA (Kingdom of Saudi Arabia), at least with certain people there."

A participant in a more recent meeting with Mr. Al-Otaiba quoted the ambassador as referring to the Middle East as “the UAE region,” suggesting an enhanced Emirati regional influence. In a similar vein, former Dubai police chief Dhahi Khalfan, blowing his ultra-nationalist horn, tweeted: “It’s not humanity’s survival of the strongest, it’s the survival of the smartest.”

To be sure, Prince Mohammed has been plotting the UAE’s positioning as a regional economic and geopolitical powerhouse for far longer than his Saudi counterpart. It is not for nothing that it earned the UAE the epitaph of “Little Sparta” in the words of former US Secretary of Defense Jim Mattis.

No doubt, smarts count for a lot but in the ultimate analysis, the two crown princes appear to be exploiting windows of opportunity that exist as long as their most powerful rivals, Turkey and Iran, countries with far larger, highly educated populations, huge domestic markets, battle-hardened militaries, significant natural resources, and industrial bases, fail to get their act together.

In the meantime, separating the wheat from the chaff in the Gulf spat may be easier said than done. Gulf analyst Bader al-Saif notes that differences among Gulf states have emerged as a result of regime survival strategies that are driven by the need to gear up for a post-oil era.

The emergence of a more competitive landscape need not be all negative. Mr. Al-Saif warns, however, that “left unchecked…differences could snowball and negatively impact the neighbourhood.

Several factors complicate the management of these differences.

For one, the Saudi crown prince’s Vision 2030 plan for weening the kingdom off its dependence on the export of fossil fuel differs in principle little from the perspective put forward by the UAE and Qatar, two countries that have a substantial head start.

Saudi Arabia sought to declare an initial success in the expanded rivalry by announcing this week that the International Air Transport Association (IATA), the airlines’ global industry body, had opened its regional headquarters in Riyadh. IATA denied that the Saudi office would have regional responsibility.

The Saudi announcement came on the heels of the disclosure of Saudi plans to create a new airline to compete with world leaders, Emirates and Qatar Airways.

Further complicating the management of differences is the fact that Saudi Arabia and the UAE are likely to compete for market share as they seek to maximize their oil export revenues in the short- and medium-term before oil demand potentially plateaus and then declines in the 2030s.

Finally, and perhaps most importantly, economic diversification and social liberalization are tied up with the two crown princes’ competing geopolitical ambitions in positioning their countries as the rather than a regional leader.

Mr. Al-Oteiba, the UAE ambassador, signalled Emirati Prince Mohammed’s ambition in 2017 in an email exchange with Elliot Abram, a former neo-conservative US official.

"Jeez, the new hegemon! Emirati imperialism! Well, if the US won't do it, someone has to hold things together for a while," Mr. Abrams wrote to Mr Al-Oteiba referring to the UAE’s growing regional role.

"Yes, how dare we! In all honesty, there was not much of a choice. We stepped up only after your country chose to step down," Mr. Al-Oteiba replied.

Differences in the ideological and geopolitical thinking of the two Prince Mohammeds when it comes to political Islam and the Brotherhood re-emerged recently for the first time in six years.

Differing Saudi and Emirati approaches were initially evident in 2015 when King Salman and his son first came to office, a period when the Emirati crown prince, who views political Islam and the Muslim Brotherhood as an existential threat, had yet to forge close ties to the kingdom’s new leadership.

At the time, Saudi Foreign Minister Saud al Feisal, barely a month after King Salman’s ascendancy, told an interviewer that “there is no problem between the kingdom and the movement.”

The Muslim World League, a body established by Saudi Arabia in the 1960s to propagate religious ultra-conservatism and long dominated by the Brotherhood, organized a month later a conference in a building Mecca that had not been used since the banning of the brothers to which Qataris with close ties to the Islamists were invited.

Saudi Arabia adopted a harder line towards Brotherhood-related groups within months of the rise of the Salmans as Emirati Prince Mohammed gained influence in the Saudi court.

The Muslim League has since become the Saudi crown prince’s main vehicle for promoting his call for religious tolerance and inter-faith dialogue as Saudi Arabia and the UAE promote themselves as icons of a socially moderate form of Islam that nonetheless endorses autocratic rule.

The kingdom signalled a potential change in its attitude towards Brotherhood-related groups with the broadcasting last week by Saudi state-controlled Al Arabiya TV of a 26-minute interview with Khaled Meshaal, the Doha-based head of the political bureau of Hamas, the Islamist group that controls the Gaza Strip. Hamas maintains relations with Iran and is viewed as being part of a Brotherhood network. Mr. Meshaal called for a resumption of relations between Saudi Arabia and the movement.

Saudi Arabia designated Hamas as a terrorist organization the year before the rise of the Salmans as part of a dispute between Qatar, a supporter of Hamas and the Brotherhood, and Saudi Arabia, the UAE and Bahrain, which had withdrawn their ambassadors from the Gulf state. The kingdom was particularly upset by the close relations that Hamas had forged with Iran as well as Turkey, Saudi Arabia’s main rivals for regional hegemony.

A litmus test of the degree of change in the kingdom’s attitude will be whether Saudi Arabia releases scores of Hamas members that were arrested in 2019 as part of Saudi efforts to garner Palestinian support for former US President Donald J. Trump’s controversial Israeli-Palestinian peace plan.

Quoting the Arabic service of Turkey’s state-run Anadolu news agency, Al-Monitor reported that Al Arabiya had refrained from broadcasting a segment of the interview in which Mr. Meshaal called for the release of the detainees.

The Saudi-UAE rivalry and the ambitions of their leaders make it unlikely that the two crown princes will look at structural ways of managing differences like greater regional economic integration through arrangements for trade and investment as well as an expanded customs union that would make the region more attractive to foreign investors and improve the Gulf states’ bargaining power.

In the absence of strengthening institutions, the bets are on the Saudi and Emirati crown princes, in the words of Mr. al-Saif, the Gulf analyst, recognizing that despite their differences, “it doesn’t make sense for either one of them to let go of the other.”