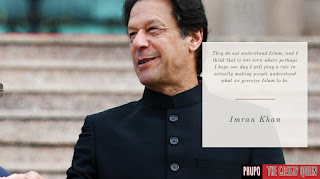 Widely seen as a populist with ultra-conservative inklings, Pakistani Prime Minister Imran Khan increasingly appears to reinforce widespread traditionalist attitudes that reject religious tolerance as well as the rights of women and minorities.

In doing so, Mr. Khan is aligning Pakistan in religious and social terms closer to Turkey than his country’s traditional allies, Saudi Arabia and the United Arab Emirates. Turkish President Recep Tayyip Erdogan has bolstered religious education at home as well as in Turkish schools abroad and recently withdrew from an international women’s rights convention.

Mr. Khan’s foreign minister, Shah Mahmood Qureshi, reportedly was scheduled to meet this week in Islamabad with Saudi Minister of State for Foreign Affairs Adel Al-Jubeir amid concern about regional security as US forces withdraw from Afghanistan and the Taliban rapidly gain ground.

Saudi Arabia, once a bulwark of religious ultra-conservatism, has, like the United Arab Emirates, sought to shave off the raw edges of its long-standing austere interpretation of Islam, liberalize social mores, enhance women’s mobility and professional opportunities, and position the kingdom as a proponent of a moderate form of Islam that highlights religious tolerance and inter-faith dialogue while supporting autocratic rule.

Except for his empathy with authoritarianism, Mr. Khan appears to be going in the opposite direction. In doing so, Mr. Khan can dip into a deep reservoir of ultra-conservatism in Pakistan that was fueled in part until the rise in 2015 of Crown Prince Mohammed bin Salman by decades of Saudi financial, material, and religious support.

Last month, the prime minister pushed the implementation of educational reform that would Islamicize syllabi across the board from primary schools to universities. Arabic would be mandatory for the first 12 years of a child’s schooling. Critics charge that religion would account for up to 30 per cent of the new syllabus.

Fueling controversy, Mr. Khan recently blamed increased sexual violence in Pakistan on women who failed to dress properly. “If a woman is wearing very few clothes, it will have an impact on the men, unless they are robots. It’s just common sense,” Mr. Khan said.

The prime minister went on to say that the practice of wearing a veil existed so “that there is no temptation in society.”

Earlier, Mr. Qureshi, the foreign minister, told CNN that Israel had “deep pockets” and was home to “very influential people” who “control media.”

When accused by the interviewer of employing anti-Semitic tropes and asked to condemn anti-Semitism, Mr. Qureshi sidestepped the question by saying: “I will not justify any rocket attacks…and I cannot condone the aerial bombardment that is taking place.” Mr Qureishi was speaking in May as Israel responded to rockets fired by Hamas, the Islamist group that controls Gaza, with a massive assault on the territory.

A recent explosion in Lahore that killed three people and wounded 27 others appeared to suggest that there could be regional consequences to the ultra-conservative moves. The explosion was seen by analysts and officials as India warning the government not to ease a crackdown on Islamic militants who long did Pakistan’s bidding in disputed Kashmir.

Mr. Khan’s national security advisor, Moeed Yousuf, said an investigation had concluded that the explosion was a car bomb planted by Indian intelligence near the home of Hafiz Saeed, a leader of the outlawed Jamat ud-Dawa and founder of Lashkar-e-Taiba, another Kashmir-focused group banned as a terrorist organization.

It was not immediately clear whether Mr. Saeed was at home at the time of the explosion. Sentenced to multiple prison terms on terrorism-related charges, some sources suggested that he had been allowed to serve time under house arrest.

The UAE mediated earlier this year a revival of a lapsed ceasefire between India and Pakistan along the Line of Control that divides Kashmiri into an Indian and Pakistani-controlled bit. The line often was a flashpoint along which Pakistani-backed militants operated.

A United Nations-designated terrorist, the US Department of Justice has put a US$10 million bounty on the head of Mr. Saeed. Mr. Saeed is believed to have masterminded the 2008 attacks on multiple targets in Mumbai that killed 165 people.

The Financial Action Task Force (FATF), an international anti-money laundering and terrorism finance watchdog, recently refused to remove Pakistan from its grey watchlist because the country had not been vigorous enough in the prosecution of United Nations-designated terrorists.

Grey listing carries no legal sanctions but restricts a country’s access to international loans. Mr. Qureshi, the Pakistani foreign minister, estimated that the grey listing cost his country’s economy US$10 billion a year.

Mr. Khan’s ultra-conservative inklings suggest that Saudi and US hopes that Pakistan, the world’s second-most populous Muslim-majority country, may pave the way for the kingdom’s establishment of diplomatic relations with Israel by going first, is a figment of the imagination.

A former senior adviser to Mr. Khan denied days before the reported talks with Mr. Al-Jubeir, the Saudi minister, that he had secretly visited Israel for meetings with senior government officials.

The issue of Saudi recognition of Israel is likely to be a topic in talks in Washington this week between US officials and visiting Saudi Deputy Defense Minister Prince Khalid bin Salman.

The kingdom said it was exempting from GCC preferential treatment goods that include components manufactured in Israel or made by companies fully or partially owned by entities on the Arab League boycott list because of their commercial relations with Israel.