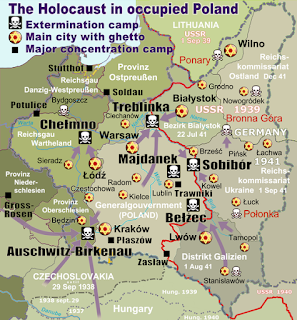 When Israeli Foreign Minister Yair Lapid recently sparked a war of words with Polish Prime Minister Mateusz Morawiecki he was doing more than resisting Central European attempts at rewriting the history and legacy of the Holocaust and right-wing nationalistic flirting with anti-Semitic tropes.

The war centred on a bill debated in the Polish parliament that makes it essentially impossible for Jews to claim property they owned before the Holocaust. Mr. Lapid denounced the law as “immoral” and warned that “it will seriously harm relations between (our) countries.”

The foreign minister went on to say that “on Polish soil, millions of Jews were murdered and no law will erase their memory. We are not interested in Polish money and the very hint is antisemitic. We are fighting for the memory of Holocaust victims, for our national pride, and we will not let any parliament pass laws that aim to deny the Holocaust.”

Defence of the legacy of the Holocaust was certain to earn Mr. Lapid brownie points among Israeli and Diaspora Jews as he manoeuvres to either replace Naftali Bennett as prime minister in 2023 as part of their coalition agreement or emerge as the head of government from an early election if the coalition collapses prematurely.

Mr. Lapid’s harsh criticism marked a reversal of former Prime Minister Binyamin Netanyahu’s willingness to give far-right, authoritarian nationalists in the Visegrad countries – Poland, Hungary, the Czech Republic and Slovakia -, political and moral cover in their efforts to whitewash their World War Two histories and their varying degrees of collaboration with the Nazis in the extermination of their Jewish communities.

Mr. Netanyahu appeared to empathize with the authoritarian instincts of the leaders of the Visegrad states even if that put the Jewish state at times in the awkward position of looking the other way, if not defending the fomenting of anti-Semitic sentiment. That was most evident with Hungarian Prime Minister Victor Orban’s attacks on Hungarian-born liberal philanthropist George Soros.

Mr. Netanyahu also seemed to sympathize with the Central Europeans’ anti-migrant (read anti-Muslim, frequently Christian nationalist) beliefs as well as their willingness to hollow out their democracies and curtail the rights of minorities.

Perhaps, most importantly, Mr. Netanyahu saw the Visegrad states as a bulwark against European criticism of his hardline policy towards the Palestinians. Mr. Lapid appears to believe that greater engagement with the European Union is likely to be more productive.

The timing of Mr. Lapid’s move adds significance to his policy reversal against the backdrop of Joe Biden’s defeat of Donald J. Trump in last November’s US election, a poor performance of far-right candidates in recent regional elections in France and Germany, and stagnating support for Italian populists as well as Central European leaders like Messrs. Orban and Morawiecki.

By confronting Central European revisionism, Mr. Lapid is not only restoring a degree of integrity to Israel’s claim to be the Jews’ safe haven even if that status is called into question by its unresolved conflict with the Palestinians.

He is also piling on the pressure on the Central Europeans as Mr. Biden insists that democratic alliances a cornerstone of his foreign policy and some West European leaders are telling their Central European colleagues to live up to European Union standards such as independence of the judiciary and the media as well as minority rights, particularly concerning gender and sexuality or leave the union.

Mr. Lapid’s distancing from Mr. Netanyahu’s erstwhile allies strokes with his simultaneous declaration that Israel would break with the former prime minister’s partisan alignment with Republicans in the United States that threatened to weaken Democratic and bipartisan support for the Jewish state.

Mr. Netanyahu broke with the traditional Israeli policy of ensuring that the Jewish state had bipartisan support in Washington. Instead, he identified Israel with Mr. Trump’s Republicans because of their uncritical support of hardline Israeli policies.

Mr. Trump recognized Jerusalem as the capital of the Jewish state and Israeli annexation of the Golan Heights captured from Syria during the 1967 Middle East war. He also put forward a plan to end the Israeli-Palestinian conflict that wholly supported Mr. Netanyahu’s policies at the expense of the Palestinians.

“In the past few years, mistakes were made. Israel’s bipartisan standing was hurt. We will fix those mistakes together,” Mr. Lapid told US Secretary of State Anthony Blinken during a meeting in Rome.

Mr. Lapid’s bipartisanship does not imply a more moderate approach towards peace with the Palestinians with Mr. Bennett, an opponent of an independent Palestinian state and proponent of Jewish settlement policy, as a coalition partner.

It does, however, seem to mean a policy that is less openly provocative and in the face of a US administration that maintains support for a two-state solution even if it does not invest political capital, time, and energy in achieving that goal.

In the meantime, it may be far too early to write off populists and nationalists in either the United States or Europe. Nonetheless, Mr. Biden’s electoral victory coupled with setbacks in Europe and the loss of Israeli cover for Central European revisionists makes civilizationalist leaders in Asia like Chinese President Xi Jinping and Indian Prime Minister Narendra Modi appear firmer in their saddles than their Western counterparts.