Egypt’s search for a fig leaf: It’s not the Handball World Championship 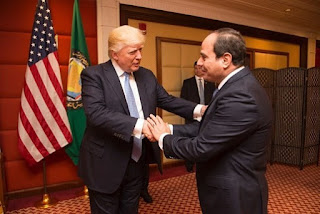 This article first appeared on Play the Game

Hosting major sports tournaments can confer prestige on a country, but in the case of Egypt, the 2021 Handball World Championship will do little to repair its relations with the US, Italy and states in the Gulf, argues James M. Dorsey in this analysis.

Egyptian general-turned president Abdel Fattah Al-Sisi sees the 2021 men’s handball world championship in Cairo and Alexandria as an opportunity to put his best foot forward at a time when Egypt’s relations with its closest regional and global partners are encountering substantial headwinds.

Successful hosting of the championship, the first to involve 32 rather than 24 competing teams, would also serve to  counter criticism of the government’s handling of the coronavirus pandemic. Egyptian health minister Hala Zayed recently admitted that many more Egyptians contracted the virus than the government has so far reported. A successful hosting would further put a crown in the feather of Egyptian-born International Handball Federation (IHF) president Hassan Moustafa.

Egypt has put strict pandemic-related precautionary heath measures in place for the tournament from the moment teams, officials, and journalists arrive at Cairo International Airport. The measures apply to training, lodging and media arrangements as well as the transport to and from hotels and the championship’s four designated match venues. Egypt is determined to ensure that the championship does not turn into a spreader of Covid-19.

That concern prompted the IHF and Egyptian authorities at the last minute to shelve a plan to allow fans into the four venues that include the Cairo Stadium Sports Hall, the New Capital Sports Hall in Egypt’s newly built desert capital east of Cairo, the Dr Hassan Moustafa Sports Hall in Giza, and the Borg Al Arab Sports Hall in Alexandria.

The IHF said the decision was taken “considering the current COVID-19 situation as well as concerns that have been raised, amongst others by the players themselves.”

Critics charge that Egypt is hosting the tournament even though it seems unable to meet the basic requirements of medical personnel who are on the frontline of the fight against the pandemic.

Doctors and nurses have protested against the high number of infections in their ranks because  they lack access to sufficient personnel protection equipment and are threatened with imprisonment if they fail to report to work despite the risk to their lives.

Symptomatic for Mr. Al-Sisi’s brutal crackdown on any kind of criticism, several doctors have been arrested on terrorism charges for voicing their grievances.

Putting aside the fact that the impact of a handball tournament pales when compared to the prestige of hosting a mega-event like the World Cup or the Olympic Games, the handball tournament is unlikely to provide much of a fig leaf for Mr. Al-Sisi’s hardhanded repression of anyone voicing an opinion but his sycophantic supporters.

That is particularly true for the incoming administration of US President-elect Joe Biden that has not only promised to emphasize human rights in its foreign policy but also needs to do so in its bid to repair America’s image and restore its credibility, severely damaged by four years of Donald J. Trump, widely viewed as an authoritarian who undermined foundations of democracy.

Similarly, the tournament will not change perceptions in Italy and much of Europe that hold Mr. Al-Sisi’s intelligence service and law enforcement responsible for the kidnapping, torture and killing of Giulio Regeni.

A 28-year-old postgraduate student at Cambridge University, Mr. Regeni had been researching Egypt's independent unions before he went missing in late January 2016. His body was found in a ditch so badly mutilated that his mother could only identify her son by the tip of his nose. He reportedly had sustained a broken neck, wrist, toes, fingers, and teeth before his death, while initials were carved into his severely burned and bruised skin.

Mr. Al-Sisi’s abominable human rights record may not be of concern to the United Arab Emirates and Saudi Arabia but equally the tournament will do little to repair cracks in his relationship with the two Gulf states, his main financial backers.

In a move that will not have gone unnoticed in Gulf capitals, Egypt anointed the newly opened, Qatari-owned St. Regis hotel on the banks of the Nile River in Cairo as one of the tournament’s key logistics nodes, including its media center.

Qatari Finance Minister Ali Sharif al-Emadi landed in Cairo last week to inaugurate the hotel hours after a Gulf Cooperation Council (GCC) summit lifted a 3.5-year long Saudi-UAE led economic and diplomatic boycott of Qatar, in which Egypt as well as Bahrain participated. Mr. Al-Emadi was the first Qatari Cabinet official to visit Egypt since the boycott was imposed in 2017.

Showcasing the hotel was meant to counter-intuitively signal to Saudi Arabia and the UAE Egypt’s concern that reconciliation with Qatar involved far too many concessions, including dropping demands for the closure of Qatar’s state-funded, freewheeling Al Jazeera television network and a halt to support of political groups like the Muslim Brotherhood.

Egypt was forced to reluctantly agree to lifting the boycott even though it accepted continued Qatari investment and Qatari gas supplies over the last 3.5 years.

Egypt also felt sidelined by the UAE and Bahrain’s establishment of diplomatic relations with Israel. The move deprived Egypt of its role as Israel’s primary official diplomatic conduit to the Arab world at a moment that the Al-Sisi regime is seeking to put its best foot forward in anticipation of Mr. Biden taking office.

Mr. Al-Sisi’s concerns are compounded by Emirati support for Ethiopia with which he is at odds over the construction of a dam on the Nile that threatens Egypt’s water supply; the UAE’s growing influence in neighboring Sudan; plans to link the UAE and Israel through a pipeline that would compete with Egypt in selling gas to Europe; and Emirati interest in the port of Haifa that could create an alternative to the Suez Canal.

All of this could undermine Egypt’s position as a key pillar of US Middle East policy and persuade the US to further shift the focal point of its broader Middle East and North Africa policy to the Gulf.

Mr. Al-Sisi has sought to pre-empt an incoming Biden administration by releasing prisoners, highlighting his good relations with Egyptian Christians, and hiring US lobbying firms to plead his case to the Biden camp as well as Capitol Hill.

Hosting a handball world championship is a minor maneuver in the mountain that Mr. Al-Sisi is trying to move, particularly one that Mr. Trump tarnished by describing the Egyptian leader as “my favorite dictator.” That is a label a handball tournament is unlikely to alter.

Dr. James M. Dorsey is an award-winning journalist, a senior fellow at Nanyang Technological University’s S. Rajaratnam School of International Studies in Singapore and the National University of Singapore’s Middle East Institute, and the author of the syndicated column and blog, The Turbulent World of Middle East Soccer.