African Cup of Nations: A PR fiasco for Egyptian hosts 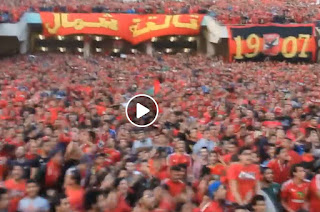 Former coach and player Farouk Gaafar put his finger on Egyptian soccer’s fundamental problem even if his call for the military to take over and run the Egyptian Football Association (EFA) with an “iron fist” amounted to inviting the fox into the chicken pen.

Mr. Gaafar issued his call after Egypt, once the undisputed king of African soccer, was knocked out of the African Cup of Nations that it is hosting in a bid to bolster its international image tarnished by systematic violations of human rights. Egypt’s government is headed by general-turned-president

Abdel Fattah al-Sisi, who initially came to power in a military coup.
Egypt’s bid has been marred by multiple events besides its poor performance in the tournament.

Fans exploited matches to honour legendary but controversial retired player Mohamed Aboutreika as well as the deaths of 94 fans in two separate politically charged incidents in 2012 and 2015.

World soccer body FIFA, in a legally controversial move, took over management of its Cairo-based affiliate, the corruption-riddled Confederation of African Football (CAF), on the eve of the tournament.

As if all of this were not enough, Egyptian midfielder Amr Warda was initially banned early in the tournament from further participation amid mounting allegations of online sexual harassment, but then under pressure from his team mates reinstated.

Like many fans and some executives, Mr. Gaafar, who managed the military’s Talaee el Geish (Army’s Vanguards) Sports Club for seven years, blamed Egypt’s poor performance in the African tournament as well as last year’s World Cup in Russia on the EFA’s lack of accountability.

EFA president Hany Abo Rida sacked Mexican national team coach Javier Aguirre and resigned together with the majority of the group’s board members hours after the Egyptian national team’s crucial defeat at the hands of South Africa.

“The state has done everything, but the football federation and the players have done nothing. There is nothing better than the discipline of the armed forces… football needs to be run with an iron fist,” Mr. Gaafar said on a pro-government television show.

There is no doubt that Egyptian soccer desperately needs deep structural reform. The problem is that the state of the sport reflects Egypt’s broader structural problems. The country’s military is as much part of the problem as it is part of the solution.

Add to this the fact that a military takeover of soccer would deepen problems because it would violate FIFA’s insistence on a fictional separation of sports and politics and likely lead to a suspension of the EFA’s membership of the world soccer body.

Alaa Sadek, a Qatar-based Egyptian critic of Mr. Al-Sisi, moreover, noted that Egypt had failed to qualify for the World Cup in the 31 years between 1936 and 1967 that it was headed by a military officer.

Mr. Sadek charged that Egyptian soccer had recently failed domestically and internationally  because Mr. Al-Sisi since coming to office in 2013 had turned the EFA into an “army camp.”

Newspaper editor Gamal Sultan noted that the government and the military’s recent assault on the EFA ocurred only after Egypt lost its decisive match against South Africa.

“Only last week, the EFA was clean, acceptable and patriotic. They were received by Sisi and the minister of defence and celebrated only when their victories served the image of the regime. One week later, the EFA has become corrupt and wanted for investigations. These are the standards of justice in today’s Egypt,” Mr. Sultan said.

In a rare broad-based lifting of an eight-year old ban on unfettered attendance of soccer matches by fans, Egypt’s defeat in the African Cup was witnessed by 75,000 mostly Egyptian spectators, many of whom have long accused the EFA of mismanagement and corruption.

Egypt has with brief exceptions banned fans from stadia since the first day of the January 2011 popular revolt that toppled president Hosni Mubarak in a bid to stop soccer from being a venue for the release of pent-up popular anger and frustration as well as anti-government protest.

The government has made exemptions for international matches so that it could not be blamed for weak national team performance and to avoid putting the ban on international display.

More recently, small groups of fans have been admitted to domestic matches but only after identifying themselves with their IDs and with approval of their club.

Fans, nonetheless, defied bans on political slogans and jerseys during the African tournament by chanting Mr. Aboutreika’s name in the stadium and in online videos that went viral.

A legendary player, Mr. Aboutreika, who was consistently public about his politics, retired in 2013 after helping Egypt clinch three African Cups.

He has since been forced into exile in Qatar after being accused of having been a member of the Muslim Brotherhood, a political group that Mr. Al-Sisi has brutally tried to crush.

Mr. Aboutreika was sentenced to a jail in absentia last November for tax evasion in what many view as trumped-up charges.

Fans also ignored rules imposed to prevent political expression by lighting up the stadium with their mobile phone flashlights during the South Africa match in commemoration of the 72 supporters that died in 2012 in a stampede and 22 others in another stampede three years later.

Many fans believe the incidents were instigated in an effort to intimidate fans and cut the most militant among them down to size.

Militant soccer fans played a key role in the 2011 uprising as well as subsequent protests, including against Mr. Al-Sisi’s coup that overthrew Mohammed Morsi, a Muslim Brother and the country’s first and only democratically elected leader.

The role of the fans highlighted the threats and opportunities posed to autocrats by soccer, the only thing that evokes the kind of deep-seated passion associated with religion.

As a result, stadiums as a public space that were contested and difficult to control threatened autocratic leaders’ grip on power. Yet, soccer’s popularity offered autocrats an opportunity to shore up their tarnished image by associating themselves with something that had immense public acceptance.

If anything, Egypt’s African Cup of Nations demonstrates that exploiting soccer for political purposes is a tricky business.

Much like in the latter part of toppled Mr. Mubarak’s 30-year rule, Mr. Zidan was inferring that fans see the national team as Mr. Al-Sisi’s squad rather than Egypt’s.

In a country in which all expressions of dissent are brutally repressed, that is as clear a rejection of Mr. Al-Sisi’s effort to polish his and Egypt’s severely tarnished image as it gets.