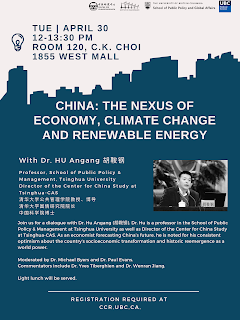 A controversy about a University of British Columbia invitation to a Chinese advocate of forced re-education and assimilation of ethnic minorities highlights the risks involved in ignoring early stage civilisationalism, the emerging system of principles of governance underwriting a new world order that defines states in civilizational rather than national terms and legitimizes violations of human rights.

While the invitation sparked opposition that raised freedom of speech issues, it also spotlighted the consequences of US, European and Muslim failure to recognize initial indications that China was moving away from its long-standing policy of promoting inter-communal harmony by preserving minority cultures and ensuring that they benefitted from economic growth.

The erosion of China’s long-standing policy has consequences far beyond the boundaries of Tibet and China’s troubled north-western province of Xinjiang that is home to its Turkic Muslim population. It legitimizes repression of minority rights across the globe raising the spectre of inter-communal strife in societies that have long sought to foster variations of multi-culturalism and social harmony.

Calls for a rethink of China’s ethnic policy emerged in 2012 after two men set themselves on fire  outside Tibetan Buddhism’s holiest temple in the center of Lhasa, the Tibetan capital. The International Campaign for Tibet, an advocacy group, last year published the names of 155 Tibetans who have self-immolated since 2009.

Back in 2012, military officials, businessmen, intellectuals, netizens, and dissidents asserted that the self-immolations attested to a failure of policy in what was a public debate of a long secretive and sensitive topic.

The debate was fuelled by concerns that China’s official recognition of 56 different nationalities resident within its borders risked it becoming another example of the post-Communist break-up of states such as the Soviet Union, Czechoslovakia and Yugoslavia.

It was also informed by a series of incidents in Xinjiang and other parts of China, including inter-communal violence in 2004 between Han Chinese and Hui Muslims, widely viewed as China’s most integrated Muslim community, that left some 150 people dead.

It was in that environment that Hu Angang, an economist and founding director of Tsinghua University’s Center for China Studies, one of China’s most influential think tanks, urged the government to adopt an imposed melting pot approach that would create a “collective civic culture and identity.” It was an invitation extended to Mr. Angang that sparked controversy at the University of British Colombia.

Mr. Hu’s policy recommendations, articulated in a widely published article co-authored in 2011 by fellow researcher Hu Lianhe, a pioneer of terrorism studies in China who has since become a senior official of the Chinese communist party’s United Front Work department in Xinjiang, appear to have provided a template or at least a framework for China’s brutal crackdown on Turkic Muslims.

Xinjiang serves as a prime example of the risks of failing to respond to civilisationalism’s early warning signs.

Up to one million people are believed to have been detained in re-education camps dubbed “'vocational education' and employment training centres” by the government where inmates are taught Mandarin, allegedly forced to violate Muslim dietary and religious practices, and browbeaten with the notion that Xi Jinping thought, the precepts of China’s president, supersede Islamic teaching.

Messrs. Hu warned that regional ethnic elites and interests enabled by China’s acceptance of what amounted to minority rights could lead to separatism on the country’s strategic frontiers. They suggested that the central committee of the Communist party had recognized this by pushing in 2010 for “ethnic contact, exchange and blending.”

To achieve that, the two men advocated removing ethnicity from all official documents; demographic policies that would water down geographic concentration of ethnic minorities and ensure a ‘proper’ population mix; emphasis on the use of Mandarin as the national language; promotion of China as the prime identity of minorities; and taking steps to counter religious extremism.

James Leibold, a China scholar, who raised alarm bells early on and focused attention on Messrs. Hu’s analysis and the Chinese debate, lamented at the time that “few in the West…seem to be listening.”

Mr. Leibold echoed his warning six years later when Mr. Lianhe last August stepped for the first time onto the international stage to defend the Chinese crackdown at a meeting of the United Nations Committee on the Elimination of Racial Discrimination (CERD).

“The emergence of Hu Lianhe portends a significant shift in both the institutional and policy direction emanating out of Beijing, and suggests that what is happening in Xinjiang is the leading edge of a new, more coercive ethnic policy under Xi Jinping’s ‘New Era’ of Chinese power, one that seeks to accelerate the political and cultural transformation of non-Han ethnic minorities,” Mr. Leibold said.

Describing Mr. Lianhe as an influential party official and intellectual, Mr. Leibold suggested China was acting in Xinjiang and Tibet on the official’s assertion in 2010 that “stability is about liberating man, standardizing man, developing man and establishing the desired working social order.” Mr. Lianhe advocated adopting his approach across the country.

In Xinjiang, standardization translates into government announcements that local officials are visiting Uyghur homes during this year’s fasting month of Ramadan to ensure that they are not observing the religious commandment.

"We must take effective action to end the gossiping about high level Party organs; finding fault, feigning compliance, and praising in public while singing a different tune in private or when alcohol is on the table", Mr. Leibold quoted a confidential memo written by local officials in Xinjiang as saying.

In hard-line remarks to this weekend’s Shangri-La Asian Security Dialogue in Singapore, Chinese defense minister Wei Fenghe, wearing a military uniform with a chest full of ribbons, asserted that “the policy in Xinjiang is absolutely right because over the past two years there is no single terrorist attack in Xinjiang.

The living standards of the local people have improved. The number of tourists to Xinjiang is over 150 million people…. The average GDP of people in Xinjiang is 7,500 US dollars… Xinjiang has carried out vocational education and training centres to ensure that there are no terrorist attacks, to help these people deradicalize and help these people have some skills. Then they can better reintegrate into society. Isn’t that a good thing?” General Wei asked.

It is good thing on the assumption that economic progress can ultimately and sustainably trump cultural and/or ethnic aspirations and that it justifies a policy that critics have dubbed cultural genocide by in the words of Mr. Leibold abolishing “non-Han cultural, linguistic and religious practices” and eroding social trust.

The policy’s success depends on the sustainable Uyghur internalization through re-education and repression of religious and cultural practices as a survival strategy or out of fear.

General Wei’s defense of the policy notwithstanding, renowned China scholar Yitzhak Shichor concluded in a recent study that the defense minister's People’s Liberation Army (PLA) has so far refrained from involvement in maintaining internal security in Xinjiang, making it the responsibility of para-military forces.

“That could change if the civilian police force and PAP fail in their mission,” Mr. Shichor quoted former US army and military intelligence China expert Dennis J. Blasko as saying. Mr. Blasko was referring to the People’s Armed Police by its acronym PAP.

General Wei and Mr. Hu’s Xinjiang’s statements are but the most extreme example of civilizationalist politics that have globally given rise to Islamophobia; Hindu nationalism; rising anti-Semitism; jihadist massacres of minorities including Christians and Yazidis, lax attitudes towards white supremacism and efforts by some leaders to recreate ethnically and/or religiously homogeneous societies.

Civilisationalists’ deemphasizing of human, women’s and minority rights means reduced likelihood that incidents of radicalization and ethnic and religious conflict can be pre-empted. The risk of conflict and societal strife are enhanced by increased obsession with migration that erases escaping to safer harbours as an option.