The battle for Idlib: A potential Catch-22 for China 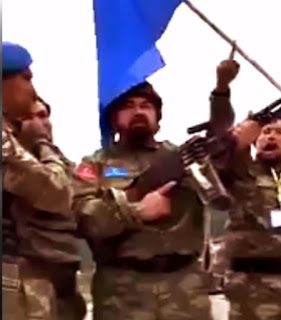 An impending Russian-backed Syrian assault on Idlib, the war-wracked country’s last rebel stronghold, risks putting Uyghurs in the spotlight at a time that the Muslim world has remained silent amid mounting media and academic attention on China’s crackdown on the ethnic Turkic group in its strategic north-western province of Xinjiang.

Spotlighting Uyghur activism in Turkey and militancy in Syria could turn Chinese backing of the assault in the belief that a defeat of the rebels would prevent Uyghur and Central Asian foreign fighters from gravitating towards Afghanistan, Tajikistan and Pakistan from where it would be easier to target China into a double-edged sword.

Ironically, China’s dilemma in Idlib echoes a mistake it made at the dawn of the 21st century when it pressured Turkey, a mainstay till then of support for aspirations of the Uyghurs, with whom it has ethnic and linguistic affinity, to force some exiled nationalist leaders to leave Turkey. The activists left for the United States and Europe, countries that were less susceptible to Chinese pressure and unwilling to bow to Chinese demands that they curb the exile’s activities.

This time round, the Catch-22 China potentially could be caught in is embedded in Turkish opposition to an all-out assault on Idlib because it would likely spark a massive move of refugees towards its borders and Uyghur support for Turkish policy.

Turkish president Recep Tayyip Erdogan this week unsuccessfully sought to persuade his Russian and Iranian counterparts, Vladimir Putin and Hassan Rouhani, to accept a plan that would grant rebel groups safe passage to a buffer zone on condition they hand over weapons to a loose coalition of groups backed by Turkey.

The evacuated rebels would likely include fighters of the Turkistan Islamic Party (TIP), a shadowy Uyghur jihadist group that emerged during the Syrian war and the Islamic Movement of Uzbekistan (IMU) that has Uyghurs in its ranks, both of which have links to the Istanbul-based East Turkistan Education and Solidarity Association (ETESA). East Turkistan is the Uyghur name for Xinjiang.

Its ETESA’s support for Turkey, including its 2015 military intervention in northern Syria dubbed Operation Euphrates Shield and its opposition to a full-fledged assault on Idlib coupled with the ties it has forged to Mr. Erdogan’s ruling Justice and Development Party (AKP) and the Turkish military, that in the humanitarian fallout of Idlib could make it more difficult for Turkey to look the other way in Xinjiang. That in turn would put other Muslim countries and groups on the spot.

China has long accused members of ETESA of having joined rebel groups in Syria and facilitating travel to the war-torn country of other Uyghurs. China’s Communist Party organ, Global Times, asserted in 2012 that ETESA “aims to ‘educate and train Muslims’ in Xinjiang and ‘set them free’ by forming a Muslim state. Turkish officials insist that they have worked with China to counter Uyghur extremists.

Hundreds of Uyghurs marched in March in the south-eastern Turkish province of Hatay near the border with Syria in support of Turkish policy. In a meeting with the region’s AKP leader, Ibrahim Guler, they offered to join a Turkish offensive, Operation Olive Branch, that sought to prevent US-backed Syrian Kurdish rebels from consolidating their military gains.

“The hearts of hundreds of thousands of people from Eastern Turkistan who live in Turkey today as well as 35 million in Eastern Turkistan are beating in sync with Turkey, the Turkish army and Turkish troops,” ETESA’s Seyit Tümtürk told Mr. Guler.

The meeting coincided with the posting on Twitter of a video clip of a Uighur dressed in a Turkish military uniform and sporting an automatic weapon, claiming to be fighting in the northern Syrian district of Afrin alongside Turkish-backed rebels. The Uyghur warned Chinese residents of Xinjiang to leave the province.

“Listen you dog bastards, do you see this? We will triumph! We will kill you all. Listen up Chinese civilians, get out of our East Turkestan. I am warning you. We shall return, and we will be victorious,” the Uyghur said.

Uyghurs in the Istanbul district of Zeytinburnu, home to Turkic Chinese and Central Asian dissidents and militants, volunteered two months earlier at a nearby military facility to join the Turkish armed forces.

China has steered clear of direct military involvement in Idlib, relying on Syria and Russia instead to get the job done. Nonetheless, the fact that it apparently briefly considered joining the fray indicates the degree of Chinese concern and the fact that the threat of Uyghur militancy challenges Beijing’s fundamental defense and foreign policy principles.

Chinese engagement would have amounted to the People’s Republic’s first military intervention far beyond its borders in recent memory.

While there is little doubt that Syria will regain control of Idlib, irrespective of whether it launches a limited or an all-out assault, what is less clear at this point is what the fate of Uyghurs in the region will be.

Uyghur backing of Turkish policy and military efforts coupled with the potential move of Uyghur fighters to Turkish-controlled safe zones or Turkey itself is likely to put pressure on Mr. Erdogan, a vocal advocate for other Islamic causes, to speak out on the situation in Xinjiang.

It also is likely to sow doubts in Beijing about its ability to continuously rely on Turkish and Muslim silence.

Ultimately, China’s problem is that it takes only one person to get a snow ball rolling, whether that is in Turkey or elsewhere.