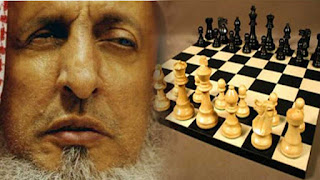 Saudi Arabia’s hosting of an international chess tournament focuses attention on the fundamental problem wreaking havoc in international sports governance and shines a spot light on the limitations of covert Saudi-Israeli cooperation in confronting Iran and political Islam and the Palestinians’ ability to be a game spoiler.

By seducing the World Chess Federation (FIDE) to grant the kingdom hosting rights with a $1.5 million check that amounted to four times the federation’s standard annual fee, Saudi Arabia joined the likes of Qatar and the United Arab Emirates in using sports to polish its troubled international image.

The Saudi effort comes at a time that Crown Prince Mohammed bin Salman is seeking to convince Saudis, the kingdom’s allies, and foreign investors that he is diversifying and reforming the economy and transforming a nation imbued by Sunni Muslim ultra-conservatism into a 21st century, knowledge-driven state.

The tournament takes place almost two years after the kingdom’s grand mufti and top religious authority, Sheikh Abdulaziz al-Sheikh, opined that Islam forbids chess as a form of gambling and a waste of time.

The Saudi bid faced two obstacles: strict dress codes for women and Israeli participation. The way the kingdom sought to overcome the obstacles says much about Prince Mohammed’s approach and the limits of his ability to introduce change.

Women’s dress codes proved easiest to address and served to highlight Prince Mohammed’s moves to increase women’s participation in the work force, lift a ban on women’s driving, and grant women access to male sporting events in a limited number of stadiums.

Saudi Arabia’s concession on women’s dress codes for the chess tournament mirrored the limited nature of Prince Mohammed’s reforms for women that failed to challenge the core of discriminatory practices in the kingdom: male guardianship that gives men the power to decide for women.

Similarly, in a country that insists on women being fully covered, female participants in the chess tournament are not entitled to dress the way they may want to. Instead, they can avoid the hijab by wearing dark blue or black formal trousers and a high-necked blouse.

Allowing at least seven Israelis to participate in the tournament would have been far trickier. It would have been the first time that Israelis would have officially been allowed to travel to Saudi Arabia and would inevitably have been seen as yet another indication of increasingly close, albeit covert, ties between the kingdom and Israel.

Saudi Arabia’s refusal to grant the Israelis visas demonstrated that an Israeli presence would have been a bridge too far. It would have added to mounting indications that Saudi Arabia has been willing to compromise on minimal Palestinian conditions for an Israeli-Palestinian peace, including control of East Jerusalem, in its effort to work with Israel in confronting Iran and political Islam.

The refusal’s underlining of the sensitivities evoked by Palestine is all the starker when contrasted with Saudi Arabia’s willingness to grant entry to a player representing Qatar despite the fact that the kingdom six months ago cut off all economic, diplomatic and air, sea and land links to the Gulf state in a so far failed bid to force it align its foreign and defense policy with that of its bigger brother.

By refusing the visas, Saudi Arabia demonstrated that the Palestinian issue may not be the root of the Middle East’s multiple problems, but that its resolution is a sine qua non for normalizing Israel’s relations with much of the Arab and Muslim world and facilitating cooperation and the pursuit of perceived common interests.

The refusal also shielded the kingdom from possible controversy during the tournament if some players refused to sit at a chess board with an Israeli. A unidentified Palestinian champion had already declared that he would refuse to play an Israeli. “We are not in a normal situation with Israel, so I can’t act as if it is,” the player said.

If other recent sporting events are anything to go by, more players may well have adopted a similar attitude. Saudi judoka Joud Fahmy bowed out of the first round of the 2016 Olympics in Rio de Janeiro to avoid competing against Israel’s Gili Cohen. The Saudi Olympic committee declared at the time that Ms. Fahmy had suffered injuries during training.

The sensitivity of projecting normalcy in relations with Israel was also evident in October when Israelis participated in the Abu Dhabi Grand Slam judo tournament. Israelis took part as representatives of the International Judo Federation rather than their country, and were banned from displaying national symbols.

Ironically, the UAE is the only Arab country to host an Israeli embassy, even if it is not accredited to the Emirates, but to the Abu Dhabi-based International Renewable Energy Agency (IRENA). The embassy, nonetheless, is Israel’s diplomatic presence in the Gulf.

All of this, coupled with some national chess federations and players protesting against FIDE’s decision to grant Saudi Arabia hosting rights despite its human rights record and refusal to ensure all qualified players would be able to participate, testifies to the inextricable relationship between sports and politics.

Yet, FIDE like all other international sports federations denies that there is any link between sport and politics. The denials enable a world in which political corruption is at the root of sports’ multiple scandals involving financial and performance corruption and in which transparency and accountability are rare quantities.

Dr. James M. Dorsey is a senior fellow at the S. Rajaratnam School of International Studies, co-director of the University of Würzburg’s Institute for Fan Culture, and co-host of the New Books in Middle Eastern Studies podcast. James is the author of The Turbulent World of Middle East Soccer blog, a book with the same title as well as Comparative Political Transitions between Southeast Asia and the Middle East and North Africa, co-authored with Dr. Teresita Cruz-Del Rosario and  Shifting Sands, Essays on Sports and Politics in the Middle East and North Africa
Israel Saudi Arabia UAE Women