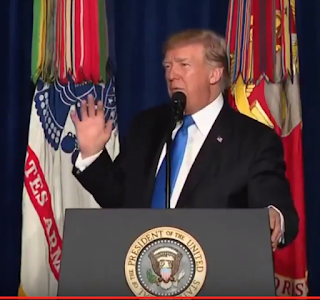 President Donald J. Trump has drawn battle lines in South Asia that are likely to have a ripple effect across Eurasia: a stepped-up war against the Taliban in Afghanistan, a tougher approach towards Pakistan’s selective support of militancy, and closer cooperation with India – moves that are likely to push Pakistan closer to China and Russia.

There is little doubt that Mr. Trump had few good choices 16 years into an Afghanistan war in which the Taliban and other militant groups are holding their ground, if not making advances, buffeted by Pakistani policies that are rooted in the fabric of the country’s military and society. Similarly, there is little doubt that Pakistan’s convoluted relationship to militancy poses serious challenges to US policy in South Asia as well as a global effort to contain political violence.

Nonetheless, Mr. Trump could find that his newly announced South Asia policy will fail to achieve his goal of an “honourable and enduring outcome worthy of the tremendous sacrifices” made by the United States. The silver lining is that Pakistan may temporarily engineer a stay of execution but ultimately will find itself in a cul de sac from which there is no escape.

Mr. Trump, despite refusing to disclose details of his strategy in Afghanistan, made clear in a speech outlining his South Asia policy, that he hopes that an increased US military presence will force the Taliban to come to the negotiating table. Yet, achieving that would require the kind of military and political engagement in Afghanistan that Mr. Trump seems unwilling to embrace.

US media reported that Mr. Trump envisioned only a modest increase of several thousand troops in a country wracked by corruption whose military is largely incapable of standing its ground on its own. Various military and political analysts suggest that it would take a far greater commitment to militarily turn the tables on the Taliban in Afghanistan.

Moreover, Mr. Trump’s exclusive focus on defeating militants militarily or bombing them into submission ignores the broader economic, social and political problems that fuel militancy in Afghanistan and drive Pakistan’s support for the Taliban and a selection of other groups. “We are not nation building again. We are killing terrorists,” Mr. Trump said.

Announcing a tougher approach towards Pakistan, Mr. Trump insisted that the South Asian nation’s partnership with the United States would not survive if it continued to harbour and support groups that target the United States.

Adding fuel to the fire, the president emphasized the US’ strategic partnership with India, calling on it to support his administration’s policy with increased Indian economic assistance to Afghanistan. In doing so, Mr. Trump challenged a pillar of Pakistani policy towards Afghanistan: limiting Indian influence in the country at whatever price.

Mr. Trump’s approach to South Asia puts to the test two assumptions: that Pakistan will want to preserve its partnership with the United States at whatever cost and that it has few alternatives. Mr. Trump could well find that at least in the short term those assumptions are incorrect.

Pakistan’s relationship to militancy is engrained in a deeply-rooted zero-sum-game approach towards India within the military as well as an empathy for Sunni Muslim ultra-conservatism that is woven into the fabric of the security forces, parts of the government bureaucracy, and significant segments of society.

Pakistan’s use of militant groups to counter India in Afghanistan and Kashmir as well as an anti-dote to nationalist insurgents in the restive province of Balochistan is moreover tacitly endorsed by China’s repeated vetoing of the designation of Masood Azhar, an anti-Indian militant, former fighter in the anti-Soviet jihad in Afghanistan, and Islamic scholar who graduated from a Deobandi madrassah, Darul Uloom Islamia Binori Town in Karachi, that is the alma mater of numerous Pakistani militants.

Moreover, China, with an investment of more than $50 billion in Pakistani infrastructure and energy that would turn the country into a key node, if not the crown jewel of its One Belt, One Road initiative, is a logical escape for a government and a military that lacks the political will to confront its own demons. Similarly, Russia, long eager to gain access to warm water ports and expand its influence in Central and South Asia, is certain to see opportunity in further estrangement between Pakistan and the United States.

Closer ties to China and Russia may offer Pakistan a temporary escape from dealing with structural problems. Ultimately, however, Pakistan’s relationship to militancy is likely to also complicate its relations with Beijing and Moscow amid escalating violence in Balochistan and no end in sight to the militant insurgency in Afghanistan.

A series of devastating attacks in Balochistan over the last year that have targeted Pakistani cadets, decimated the legal profession in the capital Quetta, and targeted Chinese nationals as well kidnappings and drive-by shootings pose a serious obstacle to China’s strategic ambition to extend its maritime power across the Indian Ocean and turn the sleepy Baloch fishing port of Gwadar into a gateway to its troubled north-western province of Xinjiang.

Pakistan has, moreover, in the past year turned a blind eye to Saudi funding of anti-Shiite, anti-Iranian militants in Balochistan, including a Pakistani cleric who remains a member of the Council of Islamic Ideology, a government advisory body tasked with ensuring that legislation does not contradict Islamic law, despite having been designated a global terrorist by the US Treasury.

China has too much invested in for Pakistan’s selective support of militancy or the advantages of needling India by protecting Mr. Azhar to ultimately get in the way of achieving its geopolitical goals vested in its One Belt, One Road initiative.

As a result, Pakistan’s refusal to confront its demons could in the final analysis leave it out in the cold: its relationship with the United States severely damaged, India strengthened by closer cooperation with the US, and China and Russia demanding that it do what Washington wanted in the first place. Pakistan is likely to have fewer, if any, options and no escape routes once China and Russia come to the conclusion Mr. Trump has already articulated.

Dr. James M. Dorsey is a senior fellow at the S. Rajaratnam School of International Studies, co-director of the University of Würzburg’s Institute for Fan Culture, and the author of The Turbulent World of Middle East Soccer blog, a book with the same title, Comparative Political Transitions between Southeast Asia and the Middle East and North Africa, co-authored with Dr. Teresita Cruz-Del Rosario and four forthcoming books, Shifting Sands, Essays on Sports and Politics in the Middle East and North Africa as well as The Gulf Crisis: Small States Battle It Out, Creating Frankenstein: The Saudi Export of Ultra-conservatism and China and the Middle East: Venturing into the Maelstrom.
Afghanistan India Islam Militant Islam Pakistan