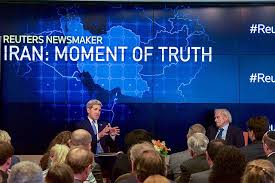 As US President Donald J. Trump gropes with a set of bad options for responding to North Korea’s rapidly expanding nuclear and ballistic missiles program, he risks creating a similar, potentially explosive dilemma in the Middle East with his efforts to tighten the screws on Iran, if not engineer an end to the two-year old nuclear agreement Iran concluded with world powers.

In fact, Mr. Trump’s apparent determination to either humiliate Iran with ever more invasive probes of universally certified Iranian compliance with the agreement or ensure its abrogation could produce an even more dangerous crisis than the one he is dealing with in East Asia. Putting an end to the nuclear agreement could persuade Iran, as did US policy under former president Barak Obama in the case of North Korea, that a nuclear military capability is central to its security.

The risk in East Asia is a devastating military confrontation in which in the words of US Republican senator Lindsey Graham, who warned, quoting Mr. Trump, that “If there’s going to be a war to stop (North Korea), it will be over there. If thousands die, they’re going to die over there. They’re not going to die over here.”

The key difference between North Korea and Iran is not the spectre of massive casualties in case of military action. It is the fact that in contrast to East Asia where the pariah state’s nuclear proliferation has not prompted others in the region like South Korea and Japan to launch programs of their own, an Iranian return to an unsupervised nuclear program would likely accelerate an already dangerous arms race in the Middle East to include countries like Saudi Arabia and the UAE seeking a nuclear capability of its own.

Even without the arms race, Israel, the Middle East’s only, albeit undeclared, nuclear power, threatened prior to the conclusion of the nuclear agreement, to militarily take out Iranian facilities.

A termination of the agreement could also accelerate thinking in Riyadh and Washington about the utility of fostering unrest among Iran’s ethnic minorities in an attempt to destabilize the Islamic republic and create an environment conducive to regime change. The strategy risks not only adding to conflict already wracking the Middle East, but further endangering stability in Pakistan.

Even without a covert effort to destabilize Iran, Iranian leaders would likely see an end to the nuclear agreement as part of an effort to ultimately topple them – a perception that would enhance the attractiveness of the North Korean model.

The risk is enhanced by another difference between the North Korean crisis and a potential one involving Iran. World powers agree that the North Korean program needs to be curbed but differ on how that can best be achieved.

When it comes to Iran, the United States is, however, likely to find itself out on a limb by itself. The US’s partners in the agreement with Iran – China, Russia, France, Germany and Britain – believe Iran is in full compliance and there is no justification for endangering an accord that prevents the Islamic republic from developing a nuclear military capability for at least a decade. Similarly, the US’s closest allies in the Gulf, dread the prospect of escalated tensions with Iran.

“Few countries have more to lose in such a scenario than Washington’s Gulf Arab allies, which is why they have urged the United States to rigorously enforce, but not scrap, the nuclear agreement…. As long as the JCPOA is in force and being implemented, Iran will not become a nuclear power and there is therefore no need for a dangerous and unpredictable military confrontation. Without it, such a conflict, or the equally alarming and unacceptable emergence of Iran as a nuclear power, could become inevitable,” said Hussein Ibish, a scholar at the Gulf-funded Arab Gulf States Institute in Washington. Mr. Ibish was referring to the nuclear agreement by its acronym.

A litmus test of which way Mr. Trump will go looms large when the president in three months’ time must decide whether to certify to Congress for a third time that Iran is in compliance with the nuclear agreement. Indications suggest that the president is looking for a way to either unilaterally abrogate the agreement or provoke Iran to walk away from it.

Mr. Trump’s problem is that his unsupported view of the nuclear agreement is not an isolated issue but fits a pattern that has alarmed the United States’ European and Asian allies as well as China and Russia. The pattern was established by his unilateral termination of US adherence to the Paris climate change accord, cancellation of the Trans-Pacific Partnership (TPP), cutting of funding to UN agencies, sowing of doubts about the US’s commitment to the NATO principle that an attack on one is an attack on all, and an overall sense that he threatens security and stability by undermining the international order.

Mr. Trump last month instructed White House aides to give him the arguments for withholding certification in October. The Trump administration is also looking at pushing for more intrusive inspections of Iranian military sites that it deems suspicious, a move Iran has rejected and considers inflammatory. Mr. Trump would likely argue that an Iranian refusal would amount to a violation of the agreement.

Concerned that new US sanctions imposed this month will scare off potential European investors, Iran, in a precursor of the kind of volatility that would be sparked by an end to the nuclear agreement, said that it would strengthen its Revolutionary Guards and its Al Quds Force. The targets of the US sanctions, the Guards are the spearhead of growing Iranian influence across the Middle East with their involvement in Syria, Iraq, Lebanon and Yemen.

“Trump’s presidency could follow the same trajectory as the man he so often ridicules: George W. Bush – that of a president who manufactured a crisis, ignited an endless conflict, and eroded America’s standing around the globe,” warned businessman and scholar Amir Handjani in a commentary on the US effort to end the nuclear agreement.

Dr. James M. Dorsey is a senior fellow at the S. Rajaratnam School of International Studies, co-director of the University of Würzburg’s Institute for Fan Culture, and the author of The Turbulent World of Middle East Soccer blog, a book with the same title, Comparative Political Transitions between Southeast Asia and the Middle East and North Africa, co-authored with Dr. Teresita Cruz-Del Rosario and four forthcoming books, Shifting Sands, Essays on Sports and Politics in the Middle East and North Africa as well as The Gulf Crisis: Small States Battle It Out, Creating Frankenstein: The Saudi Export of Ultra-conservatism and China and the Middle East: Venturing into the Maelstrom.
China Europe Iran Israel Russia Saudi Arabia UAE United States