Soccer and militant Islam intersect in incidents across the Middle East 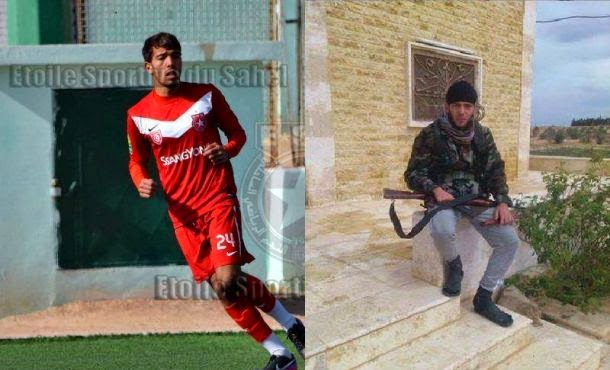 A successful soccer player near the peak of his career, 22-year Nidhal Selmi died last week a foreign fighter for the Islamic State, the jihadist group that controls a swath of Syria and Iraq. His death followed that of Tunisian handball goalkeeper Ahmed Yassin and Ahmed El-Darawi, a former policeman and Islamist parliamentary candidate who arranged soccer sponsorships for the Egyptian affiliate of Dubai telecommunications company Etisalat. Mr. El-Darawi, a supporter of the 2011 overthrow of President Hosni Mubarak, blew himself up in a suicide bombing in Iraq.

The deaths of Messrs. Selmi, Yassin and El-Darawi highlight political Islam’s attraction as a channel for protest, a cry of desperation, or the venting of pent-up anger and frustration-turned-hopelessness. They also spotlight militant Islam’s convoluted relationship to soccer. So does the role militant soccer fans aligned with the Muslim Brotherhood play in mass student protests in Egypt and controversy in Israel over an Israeli Palestinian team that honoured a former Palestinian member of parliament who was accused of aiding Lebanon’s Shiite Muslim militia Hezbollah.

It was not immediately clear what persuaded Mr. Selmi to give up his promising career as a player for one of Tunisia’s most prestigious clubs, Etoile Sportive de Tunis, as well as Tunisia’s national team. Like Mr. El-Darawi and Ahmed Yassin, a handball goalkeeper, who earlier joined thousands of  Tunisians in Syria and was killed fighting for the Western-backed Free Syrian Army, Mr. Selmi appears to have become disillusioned about prospects for change, appalled by the slaughter in Syria, and convinced that Sunni Muslims were under attack.

The attraction to Syria and Iraq parallels in some ways the left’s pull to the Spanish civil war in the 1930s. Both represent a front line in a global battle. For the left, Spain constituted the frontline against fascism. For Muslims and non-Muslims, Syria and Iraq are the frontline in the struggle against authoritarian brutality committed for some by autocratic regimes like that of Syrian president Bashar al-Assad or for others by jihadists such as Islamic State.

In the minds of many of these fighters on both sides of the divide, the West has supported the brutality by all parties by refusing to enable Syrian rebels to defeat Mr. Assad’s forces and attacking Islamic State, the most potent rebel group opposed to his regime, and backing repressive regimes in the Middle East and North Africa. The perception of an existentialist global battle is further fuelled by sectarianism promoted by key autocratic allies of the US such as Saudi Arabia and the refusal of Arab members of the US-led alliance to distinguish between non-violent and violent expressions of political Islam.

Those perceptions are evidenced by the decision in recent days of Dutch and German bikers to travel to Syria to support embattled Kurds fighting to defeat Islamic State’s month-long attack on the Syrian-Turkish border town of Kobani. They are entrenched by the willingness of Western governments to accept foreign fighters joining the Kurds as opposed to the criminalization of those coming to the aid of the Islamic State.

At the same time, Islamic State’s use in its propaganda and recruitment efforts of soccer as well as athletes is in stark contrast to the group’s banning of soccer in areas it controls and its multiple attacks on soccer stadia in Iraq. An Islamic State video earlier this year featured an apparent Portuguese fighter in Syria who was a former French international who had played for British premier league club Arsenal.

The video exploited the physical likeness of a masked jihadist fighter believed to be Celso Rodrigues Da Costa, to that of French international Lassana Diarra who played for Arsenal before moving to Lokomotiv Moscow. Burak Karan, an up and coming German-Turkish soccer star, who was killed a year ago during a Syrian military raid on anti-Assad rebels near the Turkish border appeared at the time in an Islamic State video clip. Jihadists “have finally embraced the idea that nothing can truly be put into perspective today unless it is filtered through the prism of our own fametastic Premier League,” The Guardian quipped in a satirical editorial commenting on Mr. Da Costa’s appearance.

The brutal crackdown in Egypt on students protesting against last year’s military coup that toppled President Mohammed Morsi, a leader of the Muslim Brotherhood and the country’s first and only democratically elected president, further raises the spectre of radicalization as a result of criminalization of all forms of political Islam. A core group among the students is Ultras Nahdawy. The group was formed by militant supporters of storied Cairo clubs Al Ahli SC and Al Zamalek SC that supports the Brotherhood, according to Yasser Thabet, the author of an Arabic-language book on Egyptian soccer.

Ultras Nahdawy’s influence is visible in video clips of the student protests in which protesters much like militant soccer fans jump up and down while chanting and fire off coloured flares and smoke bombs. In a further effort to criminalize what has been in essence peaceful soccer-related protest, a Cairo court is considering a ban of Ultras White Knights (UWK), the militant support group of Zamalek that like its Ahli counterpart played a key role in the toppling of Mr. Mubarak and subsequent protests against military rule.

Ironically, calls for the punishment of Bnei Sakhnin, a Palestinian club in northern Israel and a past winner of the Israel Cup, transcend sectarian lines but also highlight militant Islam’s appeal as a channel of protest. Right-wing politicians have demanded that Bnei Sakhnin be penalized for honouring Qatar that stands accused of supporting Islamists at the beginning of a recent soccer match. The club also honoured Azmi Bishara, a former member of the Israeli Knesset who moved to Qatar after authorities suggested he had been spying for Lebanon’s Shiite Muslim during the 2006 Israel-Hezbollah war. Bnei Sakhnin is based in Sakhnin, an Israeli Palestinian town populated by Sunni Muslims and Christians.

Bnei Sakhnin fans sported a banner during the match with the words “Jerusalem is ours” inscribed beneath a picture of the Al-Aqsa Mosque. The demonstration occurred as Palestinian youths and Israeli security forces clashed in Jerusalem over access to the Temple Mount or Haram al-Sharif, which is holy to both Jews and Muslims. It also coincided with a statement by Israeli Defence Minister Moshe Ya’alon that he was looking to manage not solve the Israeli-Palestinian conflict.

Mr. Bishara who heads the Doha-based Arab Center for Research and Policy Studies is widely viewed as a close associate of Qatari emir Sheikh Tamim bin Hamad bin Khalifa Al Thani. Qatar is the only Arab country that does not officially recognize Israel to have openly invested in the Jewish State. It funded the building of a stadium in Sakhnin several years ago and donated money to Bnei Sakhnin during the recent Gaza war. The Qatari funding came after Israel, according to Bnei Sakhnin, rejected a request for financial assistance.

“Penalties or fines are not sufficient measures for the action of the Bnei Sakhnin team last night,” Culture and Sport Minister Limor Livnat wrote on her Facebook page. In a similar statement that was likely to fuel a sense of alienation among Israeli Palestinians, Foreign Minister Avigdor Lieberman called for the expulsion from Israel’s Premier League of Bnei Sakhnin, a team which long stood for Israeli-Palestinian cooperation.

Mr Lieberman sarcastically suggested that Bnei Sakhnin should consider playing in the Qatari or Palestinian soccer leagues instead. The response to what amounted to a protest by Bnei Sakhnin stands in stark contrast to the velvet glove treatment accorded to Bnei Sakhnin’s arch rival, Beitar Jerusalem, an openly racist, anti-Arab, anti-Muslim team that is only the Israeli squad that refuses to hire Israeli citizens of Palestinian descent.