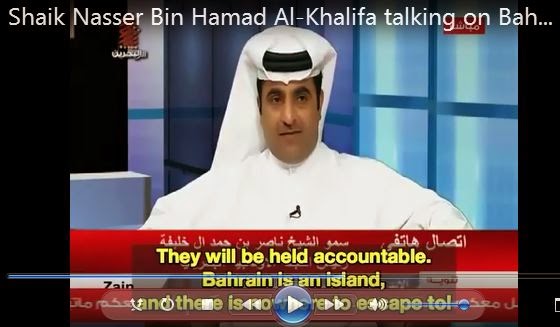 A failed effort by a public relations company representing Bahrain and a UK law firm acting on behalf of Prince Nasser bin Hamad al-Khalifa, the commander of Bahrain's Royal Guard and head of its National Olympic Committee, to micromanage media coverage of this month’s lifting of the prince’s immunity by a British court reflects mounting unease in the island state and international sporting associations. The court decision opens the door to a British police investigation into whether or not Prince Nasser was involved in the torture of political detainees that could include three former players for the Bahraini national soccer team.

The five-day long effort by UK-based Bell-Yard Communications Ltd and London law firm Schillings was aimed at forcing this writer as well as The Huffington Post to adopt Bahrain’s narrow and partial interpretation of the court decision. That interpretation involved an inaccurate assertion that no investigation into whether or not Prince Nasser had been involved in torture of detainees could emerge from the court decision, that immunity had not been part of the grounds on which the Crown Prosecution Service (CPS) had initially refused to investigate, and that soccer players had noting to do with the investigation.

The lawyers and PR representatives appeared particularly concerned about the assertion that  the investigation could involve soccer players presumably because of the implications that could have for Prince Nasser’s Olympic status as well as that of a relative of his, Sheikh Salman Bin Ebrahim Al Khalifa, the president of the Asian Football Confederation (AFC), and according to the state-run Bahrain News Agency, the prince's number two at the Bahrain Olympic Committee and the island state’s Supreme Council for Youth and Sport.

The UK High Court lifted Prince Nasser’s immunity in a case initiated by several Bahrainis who alleged that they were tortured in the aftermath of a popular uprising in Bahrain in 2011 that was brutally squashed by Saudi-backed security forces. The Bahrainis went to court after the CPS had refused to issue an arrest warrant for the prince on the grounds that his status in Bahrain granted him immunity in the UK. The prosecution said further that evidence submitted had been insufficient to justify an investigation. Because Prince Nasser was not a party to the proceedings, he had no opportunity to respond to the allegations in court.

The lawyers and PR representatives sought to have removed any reference in this writer’s article to a potential investigation or that immunity had played a role in the CPS’s thinking despite the fact that the prosecution in a statement to the court agreed to the lifting of Prince Nasser’s immunity in expectation that the Bahraini plaintiffs would submit further evidence. Lawyers for the plaintiffs said after the court hearing that the ruling opened the door to an investigation and that they would be providing additional evidence.

This writer corrected after publication a factual error in the original story. The story originally reported that an investigation had been opened rather than that the court ruling opened the door to an enquiry.

Nonetheless, in attempting to prevent fair and honest reporting, the lawyers and PR agents contradicted themselves. The attempt to force deletions that would have substantially altered the core of the story occurred despite the fact that Bell’s Melanie Riley had provided to this writer the statement of the prosecution to the court.

The prosecution said in the statement that “in the light of the Claimant’s intention to submit further evidence to the police (who are responsible for investigating the allegations), the Crown Prosecution Service has agreed to state to the police its view that immunity should not be a bar to any such investigation on the evidence currently available.”

Bahraini concern that the possible fallout of the court decision could affect not only Prince Nasser but also Sheikh Salman was evident in an email from Ms. Riley assertion that “there is no relevance to the AFC of yesterday’s proceedings.”

Sheikh Salman, according to information submitted to the prosecution, headed a committee established in 2011 by a decree by Prince Nasser to take measures against those guilty of insulting Bahrain and its leadership. Prince Nasser formed the committee after an earlier royal decree had declared a state of emergency. The royal decree allowed the Bahrain military to crackdown on the protests and establish military courts, according to the information provided to the prosecutor.
Sheikh Salman, a former soccer player who also serves as head of the Bahrain Football Association, is running next year in AFC presidential elections, which if he wins would give him an automatic seat on the executive committee of world soccer body FIFA.

The prosecutor was further furnished with a publicly available video clip in which Prince Nasser called for the punishment on television of those including athletes who participated in anti-government demonstrations. More than 150 athletes and sports officials, including the three national soccer players, were arrested or dismissed from their jobs at the time. Many have since been reinstated.

The failed Bahraini effort to micromanage reporting of Prince Nasser’s case, involving insinuations that this writer’s report was defamatory and demands that their unsolicited correspondence to a US publisher not be reported on, reflects greater sensitivity to image and reputation of Gulf states that also include the United Arab Emirates and Qatar, who stand accused of violations of human and labour rights. All three states have been put to varying degrees under the magnifying glass because of their hosting of major events, including the 2022 World Cup, the 2020 World Expo, Formula-1 races and ambitions to host similar events like the Olympic Games as well as their association with prominent educational and cultural institutions such as New York University and the Guggenheim Museum.

The various states have used different strategies to counter allegations of violations of human and labour rights. While Qatar has by and large engaged with its critics, Bahrain and the UAE have sought to prevent negative reporting by barring critical journalists and academics from entering their country.

Qatar, despite its engagement with human rights groups and trade unions, has not been immune to such tactics. Saleem Ali, a former visiting fellow at the Qatar-funded Brookings Doha Center, told The New York Times that he was advised during his job interview that he could not take positions critical of the Qatari government. At the same time, Qatar has sought to win hearts and minds in the United States with the establishment of Al Jazeera America, part of its global television network, and the expansion in the US of its belN sports television franchise.

Qatar’s strategy backfired when Britain’s Channel Four disclosed that the Gulf state had hired Portland Communications founded by Tony Allen, a former adviser to Tony Blair when he was prime minister, to create a soccer blog that wrongly claimed to be “truly independent” and represent “a random bunch of football fans, determined to spark debate,” but in fact served to attack its detractors.

For its part, the UAE has spent lavishly on public relations engaging, according to The Intercept, a US firm to demonize Qatar because of its support for the Muslim Brotherhood and other Islamist groups. The UAE is also suspected of supporting a network of Norway and France-based human rights groups that sought to project the Emirates as a champion of human rights despite crackdowns that have involved political trials denounced by international human rights groups and derided Qatar’s record.

Disclosing the UAE’s efforts to shape reporting in the US media, The Intercept noted that “the point here is not that Qatar is innocent of supporting extremists… The point is that this coordinated media attack on Qatar – using highly paid former U.S. officials and their media allies – is simply a weapon used by the Emirates, Israel, the Saudis and others to advance their agendas.”