By Jay Deshmukh2 hours ago
Cairo (AFP) - A year after a bloody Cairo crackdown, President Abdel Fattah al-Sisi has tightened his grip on Egypt, crushed the Muslim Brotherhood, jailed top opponents and turned the page on the Arab Spring, critics say.

The assault was "one of the largest killings of demonstrators in a single day in recent history," said New York-based Human Rights Watch in a report released Tuesday to mark the anniversary.On August 14, 2013, after Sisi ousted Egypt's first freely elected president, Mohamed Morsi, the security forces launched a crackdown on thousands of his supporters at protest camps in Cairo's Rabaa al-Adawiya and Nahda squares that left hundreds dead.
In Rabaa al-Adawiya alone, at least 817 people were killed, it said, calling for top officials to be investigated for likely "crimes against humanity".
According to an AFP correspondent who was at the square, more than 100 protesters were killed several hours into the crackdown.
Police said eight policemen also died in Rabaa, from a total of 42 policemen killed across Egypt that day.
View gallery 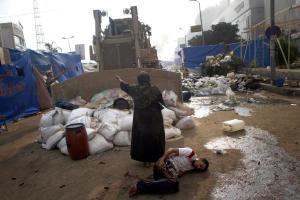 A file picture taken on August 14, 2013 shows an Egyptian woman trying to stop a military bulldozer  …
The crackdown was launched after thousands of pro-Morsi supporters refused to end their sit-ins despite repeated warnings by the interim authorities installed by Sisi, who at the time was army chief.
Since then, more than 1,400 people have been killed in street clashes, including in the Rabaa carnage, over 15,000 jailed including Morsi and the top leadership of his Muslim Brotherhood, and over 200 sentenced to death in speedy trials.
The authorities have also dissolved the Brotherhood's political arm, the Freedom and Justice Party, since Sisi became Egypt's second democratically elected president following a landslide victory in a May vote.
"Sisi has succeeded in eliminating most opposition within Egypt to his rule," said James Dorsey of the Singapore-based S. Rajaratnam School of International Studies.
"He has banned organisations, jailed opponents and certainly in early days after the ouster of Mohamed Morsi used brutal force to suppress groups like the Muslim Brotherhood," he said.
View gallery 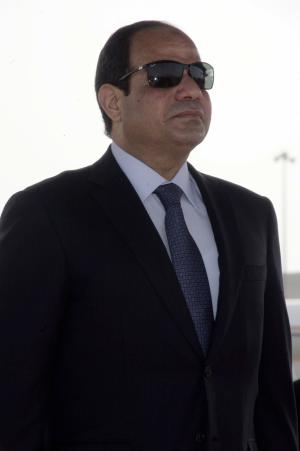 Egyptian President Abdel Fattah al-Sisi reviews troops upon his arrival at Khartoum airport for an o …
"He is operating in an environment where for all practical purposes there is no independent media to hold him to account. As a result he has consolidated his rule.”
- 'Random shootings' -
Survivors say the Rabaa al-Adawiya crackdown was not just to break the pro-Morsi sit-in but to eliminate the Islamist's supporters.
Egypt's liberal activists who revolted in 2011 against longtime president Hosni Mubarak seeking democratic freedoms largely kept quiet over the crackdown, but soon bore the brunt as authorities banned all unauthorised rallies.
The secular April 6 movement which in the heady days of the Arab Spring led the anti-Mubarak revolution has also been banned, prompting activists to charge that Egypt was heading for a worse autocracy than under Mubarak.
View gallery 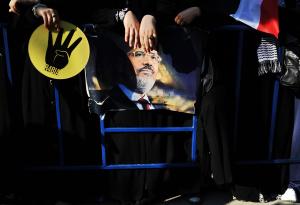 A woman holds the "Rabia sign" next to a portrait Mohamed Morsi during a rally on August 2 …
Sisi had made it clear even before becoming president that his priority was Egypt's stability rather than democratic ideals.
It could take "20 to 25 years to achieve true democracy" in Egypt, Sisi said in early May.
- Brotherhood needs 'strategy' -
The crackdown has crippled the Brotherhood, which swept all elections after Mubarak's fall until Morsi's ouster, and triggered divisions within its ranks, according to analysts.
Officials accuse the movement of being implicated in militant attacks which they say have killed more than 500 security personnel since the July 2013 ouster of Morsi.
View gallery 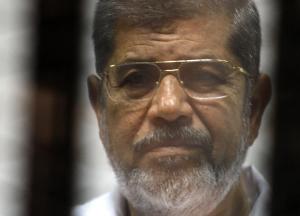 Egyptian ousted Islamist president Mohamed Morsi looks on from behind the defendants cage during is  …
"The challenge for the Brotherhood is not to allow internal divisions to translate into an organisational split," said Shadi Hamid, fellow at Brookings Institution's Centre for Middle East Policy.
The movement lacks a strategy to counter Sisi's "resilience" to stay in power and needs a long-term formula, he said.
"They don't have any major strategy beyond protests, protests, protests, while waiting for the economy to suffer," said Hamid.
The pro-Morsi Anti-Coup Alliance has called for nationwide protests on Thursday under the slogan "We Demand Retribution" to mark the first anniversary of the crackdown.
The new authorities have succeeded in "destroying the status which the Brotherhood achieved" after Mubarak's ouster, said Ziad Akl, researcher at Al-Ahram Centre for Political and Strategic Studies.
"Today their businesses are confiscated, journalists giving their side of the story are jailed ... The regime has succeeded in turning the Brotherhood into an illegitimate entity and forced it to go underground."
Egypt James