Soccer pitches: An emerging battleground for control of Iraq 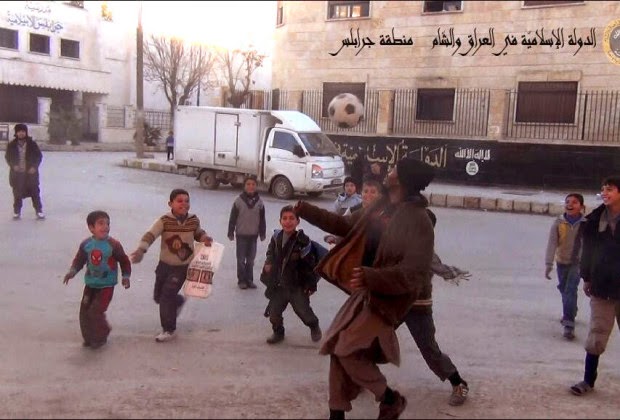 Iraqi soccer pitches have emerged as an alternative battleground in the struggle for control of Iraq between the Islamic State, the jihadist group that controls chunks of northern Iraq, and embattled Prime Minister Nuri al-Maliki.

Iraqi officials said the broadcasting last Sunday in Baghdad's Al-Shaab International Stadium of the World Cup final between Germany and Argentina was intended as a show of defiance against the Islamic State, formerly known as the Islamic State in Syria and the Levant (ISIL), which has banned soccer in territory it controls and reportedly ordered the closure of sports facilities and forbidden the wearing of shirts with images imprinted on them, including soccer jerseys.

In addition, Iraqi Football Association (IFA) officials announced that they would be organising soccer matches across areas of Iraq under government control in protest against the Islamic State’s targeting of players and fans. They said they would focus on areas that have been attacked by the Islamic State including:

The Islamic State further signalled its dim view of soccer in a purported letter to world soccer governance body FIFA demanding that the group deprive Qatar of the right to host the 2022 World Cup.

The Islamic State has positioned itself with the spate of attacks and its letter to FIFA squarely in the camp of those jihadists and Salafists, puritan Muslims who want to emulate life at the time of the Prophet Mohammed and his immediate successors, who oppose soccer as an infidel creation intended to distract the faithful from their religious obligations.

Attacks by Boko Haram in Nigeria and Al Shabab in Somalia and Kenya spiked during the World Cup with both groups targeting venues where fans gathered to watch matches on huge television screens.

The anti-soccer jihadists are strengthened in their resolve by fatwas or religious opinions issued by one segment of the Salafist clergy opposed to any form of entertainment which they view as a threat to performance of religious duties. The views of those clergymen are opposed by other Salafist imams who argue that the Quran encourages sports as long as it is in line with Islamic precepts.

They are also opposed by those militant Islamists who recognize the recruitment and bonding advantages of soccer and unlike groups like the Islamic State, Boko Haram and Al Shabab attribute some importance to garnering public support rather than seeking to impose puritan Islamic rule by sheer force.

“In Nigeria, football is a religion. It is one of the few things that brings the country together across ethnic and religious lines… Football is often an escape from the ugliness of everyday life, and that is even more true in a region under a cloud of insecurity for the last few years… (Terrorism) forces a change in lifestyles. Public gatherings in North Eastern Nigeria, even to celebrate a festival of football…are likely to attract a high price. You cannot watch a game without looking around nervously from time to time,” said Nigerian journalist Joachim MacEbong.

Mr. MacEbong could have said the same of Iraq or East African nations where soccer fans are targets.

The Islamic State, despite its anti-soccer campaign has not shied away from using soccer in recruitment and propaganda videos.

And there are signs that opinion about soccer is divided even within its own ranks as well as within the larger community of those who empathize with the views of the likes of the Islamic State, Boko Haram and Al Shabab.

The mosque in Mosul, the major Iraqi city occupied by the Islamic State, where self-declared caliph Ibrahim Bin Awad Alqarshi aka Abu Bakr al-Baghdadi, who as a student was known as a talented soccer player, made a rare public appearance earlier this month was packed with men, many of whom were sporting soccer jerseys

Similarly, an online review by Vocativ of jihadist and militant Islamist Facebook pages showed that many continue to be soccer fans. They rooted for Algeria during the World Cup but switched their allegiance to Brazil, Italy, England and France once the Algerians had been knocked out of the tournament despite their condemnation of the Europeans as enemies of Islam.

“Jihadis are in some ways like any other fans – they support the local favourites,” wrote Versha Sharama, who conducted the review.

James M. Dorsey is a senior fellow at the S. Rajaratnam School of International Studies as Nanyang Technological University in Singapore, co-director of the Institute of Fan Culture of the University of Würzburg and the author of the blog, The Turbulent World of Middle East Soccer, and a forthcoming book with the same title.
Iraq Islamists Jihadists Kenya Militant Islam Nigeria Somalia