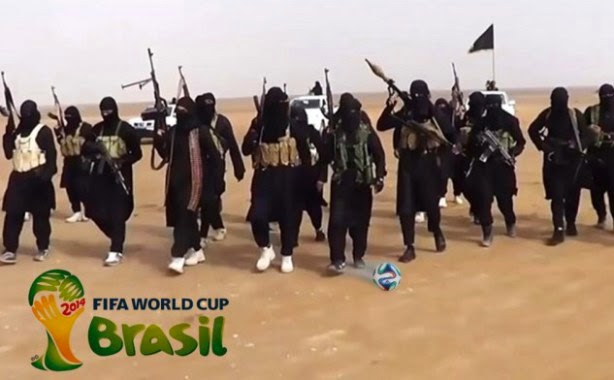 A purported letter by the Islamic State, the jihadist group that controls chunks of Syria and Iraq, has warned world soccer body FIFA not to hold the 2022 World Cup in Qatar, reviving concerns first raised in a FIFA security assessment warning two weeks before it was awarded the tournament that there could be a high risk of terrorist attacks.

The letter, first published on Alplatformmedia.com, a jihadist website, and reprinted in an Egyptian newspaper, suggested that soccer would be banned in areas controlled by the group because it constituted “a deviation from Islam.” The letter further indicated that conservative, energy-rich Gulf states were on the target list of the Islamic State, which has conquered parts of northern Iraq with lightning speed and declared a caliphate in territories it controls.

The letter, if genuine, comes amid heated Islamist debate about whether soccer is a legitimate sport according to Islamic precepts; the targeting by some Islamist groups, including the Islamic State, Somalia’s Al Shabab and Nigeria’s Boko Haram of soccer fans; and mounted controversy about the integrity of the Qatari bid to host the World Cup.

Addressing FIFA president Sepp Blatter by his formal first name, Joseph, the letter said: “We sent you a message in 2010, when you decided or were bribed by the former emir of Qatar to have the 2022 World Cup in Qatar. Now, after the establishment of the Caliphate, we declare that there will be no World Cup in Qatar since Qatar will be part of the Caliphate under the rule of the Caliph Ibrahim Bin Awad Alqarshi who doesn’t allow corruption and diversion from Islam in the land of the Muslims. This is why we suggest that you decide to replace Qatar. The Islamic State has long-rang scud missiles that can easily reach Qatar, as the Americans already know.”

Ibrahim Bin Awad Alqarshi is the legal name of Islamic State leader, Abu Bakr al-Baghdadi, who as a student was known as a talented soccer player. The group, despite the letter and its targeting of fans, has displayed an ambiguous attitude towards the world’s most popular sport.

A rare video of Mr. Al Baghdadi in which he appears to be leading prayers in the northern Iraqi city of Mosul in a mosque was packed with men, many of whom were sporting soccer jerseys. The Islamic State earlier this year published a video as part of its public relations and recruitment campaign suggesting that an apparent Portuguese fighter in Syria was a former French international who had played for British premier league club Arsenal.

A caption under the video posted on FiSyria.com, a website associated with the Islamic State, read; “A former soccer player - Arsenal of London - who left everything for jihad.” Another caption said: "He... played for Arsenal in London and left soccer, money and the European way of life to follow the path of Allah.”

Pictures distributed last month by the Islamic State of Iraqi soldiers summarily executed in Tikrit show men who often unsuccessfully donned soccer jerseys, some with the images of German Turkish player Mesut Ozil or Sweden’s Zlatan Ibrahimovic who is of Bosnian extraction, to escape the jihadist advance. In a morbid gesture, the Islamic State sent a video link of the beheading of an off-duty policeman to the Twitter hashtags #WorldCup and #Worldcup 2014 with the words: “This is our ball…it is made of skin.”

Rejection of soccer by jihadist and Salafi clerics, including two Qatari imams, who expressed concern that the faithful were watching World Cup matches instead of fulfilling their religious obligations during the holy month of Ramadan, has drawn fire from Al Azhar, the Cairo-based university widely viewed as the foremost institution of Islamic learning and various columnists who called on the faithful to ignore the fatwas or religious opinions issued by militant clerics. They seem to reflect sentiment among a majority of Middle Easterners and North Africans who have been tuning in to World Cup matches, at times even watching Israeli television stations that in contrast to Qatar’s Al Jazeera are free-to-air.

Muhammad Rafat Othman, a member of Al-Azhar's Council of Senior Scholars, said that “one is not forbidden from spending some of his time entertaining his spirit by watching anything that enlivens one, so long as it is not forbidden sights. We cannot easily accept the statement that watching matches causes a love of infidels, since Muslims are not forbidden from respecting non-Muslims so long as (the latter) do not attack them." Adballah Al-Najjar, a member of Al-Azhar's Academy of Islamic Studies, added that "anyone who says that sports are forbidden does not understand Islam and is disconnected from the religion."

Soccer fans, in response to the Islamic State’s hijacking of the World Cup hashtag on Twitter mocked the group using the tag #Islamic_Football. "Replace the ball with the heads of Alawis, Shiiites, or Christians – but not Jews,” said one fan. “Some of the stands in the stadium should be reserved for female fans from the sexual jihad brigades, who will give themselves to the winning team after the match,” said another. A third suggested that “any (player) who retreats during an offense will be treated as though he withdrew from the fold of Islam and punished with beheading."

James M. Dorsey is a Senior Fellow at the S. Rajaratnam School of International Studies (RSIS), Nanyang Technological University. He is also co-director of the University of Würzburg’s Institute for Fan Culture, and the author of The Turbulent World of Middle East Soccer blog and a forthcoming book with the same title
FIFA Iraq Islamists Jihadists Militant Islam Qatar Syria World Cup 2022