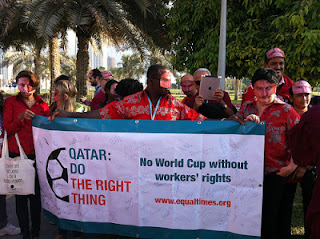 
Amid continued controversy over Qatar’s successful bid for the 2022 World Cup, migrant labor rights rather than the propriety of the Qatar bid campaign or women’s and fan rights could prove the monkey wrench that produces social change in the conservative Gulf state.


At a time that Qatar and other Gulf states are rallying the wagons against the threat posed by the Middle East and North Africa’s clamor for more transparent and accountable rule and greater freedom, the International Trade Union Confederation (ITUC) says it has wrangled a promise from Acting Qatari Labor Minister Nasser bin Abdulla Alhumidi to allow the creation of free and independent trade unions.


The ITUC, which has 175 members in 153 countries, has called for a boycott of the 2022 World Cup if Qatar fails to adopt international labor standards for its huge army of some 1.2 million foreign workers who it says toil in circumstances of virtual serfdom.


The group, which has already launched a low-key, online boycott campaign, exploited its rare presence in Qatar for a climate change conference to press its demands, which so far had largely fallen on deaf ears. Foreign workers are building billions of dollars of infrastructure in preparation for the World Cup.


"After a full and frank discussion, Qatar's labour minister assured me that if workers want to establish a union he will make sure that those who decide to join a union will not be punished. We will test him on that," ITUC General Secretary Sharan Burrow said in a statement.

In a separate email, Ms. Burrow added: “Lots of workers want to organize and join unions. “We are putting the planning in place to have a presence in Doha, the first step is to build a construction union to engage with major companies building World Cup stadium and infrastructure under contract from the FIFA 2022 supreme committee.”
Ms. Burrow said she had also met also met with the Qatari Minister for Social Affairs, the Qatar 2022 Supreme Committee and the Qatar National Human Rights Committee.
The litmus test for the ITUC is likely to be whether Qatar ratifies and implements International Labor Organization (ILO) standards, which include freedom association and would mean that the promised union would be able to engage in collective bargaining.

Qatari efforts to fend off an international boycott have so far fallen short of the confederation’s demands. In the latest effort to mollify the unions, Qatar last weekend allowed a rare demonstration in favor of foreign labor rights. Union members wore masks of two Nepali workers during the rally to highlight the abuses of guest workers in the Gulf state.


The ITUC has repeatedly employed Nepali workers, among whom the suicide rate is high, as its case study. “More people will die building the World Cup infrastructure than players will play on the field,” Ms.  Burrow said.


Lack of democratic freedoms is a concern not only for unskilled workers but also professionals and businessmen. New York Times columnist Thomas Friedman recently quoted a Turkish expert describing the requirement for a Qatari sponsor to work in the country.


“If you have a work permit and you want to leave the country, you need your sponsor to give you written permission. If your sponsor dies, his son inherits that right,” Mr. Friedman quoted the expert, whose sponsor’s son is very young, as saying. “If he says I cannot leave, I cannot leave. I do business but I have no rights at all. ... We joke that we are ‘modern slaves’ there. And this country is trying to bring democracy to Syria?” the expert said referring to Qatar’s support for rebels fighting the regime of Syrian leader Bashar al-Assad.


The rally followed moves by Qatar to ensure that companies enforce safety and security standards, pay workers on time and ensure that companies properly house foreign workers. Construction industry sources said Qatar had reduced the number of workers allowed to live in one room from eight to four and that it was building a compound for the laborers with modern residential units as well as shops and cinemas.


The ITUC has rejected these moves, asserting they fail to meet international labor standards and should be part of collective bargaining.


Allowing the rally and the promise to permit the creation of unions contrasts starkly with a crackdown in Qatar and other Gulf states on critics and stricter control of the media and the Internet. A Qatari poet, Muhammad Ibn al-Dheeb al-Ajami, was last month sentenced to life in prison in what legal and human rights activists said was a “grossly unfair trial that flagrantly violates the right to free expression” on charges of “inciting the overthrow of the ruling regime.”


Qatar has positioned itself as a frontline supporter of anti-autocratic popular revolts in the Middle East and North Africa and its state-owned Al Jazeera television network as a path breaker for freedom of the media in the region. Mr. Al-Ajami’s sentencing in a two-line written judgment was not reported by Al Jazeera.


"Qatar, after all it’s posturing as a supporter of freedom, turns out to be determined to keep its citizens quiet.  Ibn al-Dheeb's alleged mockery of Qatar's rulers can hardly compare to the mockery this judgment makes of the country's posture as a regional center for media freedom," said  Human Right Watch’s Joe Stork.


A draft media law approved by the Qatari Cabinet would prohibit publishing or broadcasting information that would "throw relations between the state and the Arab and friendly states into confusion" or "abuse the regime or offend the ruling family or cause serious harm to the national or higher interests of the state." Violators would face stiff financial penalties of up to 1 million Qatari Riyals ($275,000).

James M. Dorsey is a senior fellow at the S. Rajaratnam School of International Studies and the author of The Turbulent World of Middle East Soccer blog
Qatar World Cup 2022