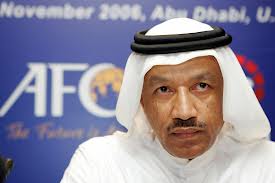 Acquitted but not acquitted: Mohammed Bin Hammam
By James M. Dorsey
FIFA, world soccer body’s governing body, is focusing its investigation of suspended executive committee and Asian Football Confederation (AFC) president Mohammed Bin Hammam on his management of the Asian body’s finances and his relationship to a Singapore-based sports marketing group. The focus follows submission of a report in which independent FIFA ethics investigator Michael J. Garcia dropped his enquiry into allegations that Mr. Bin Hammam had sought to bribe Caribbean soccer officials.


Sources said the report that Mr. Garcia submitted to FIFA adjudicator Hans-Joachim Eckert included an internal audit of AFC finances and the group’s $1 billion marketing rights agreement (MRA) with Singapore-based World Sports Group (WSG) as well as unspecified new information related to the audit.
“There was substantial new information that made those within AFC reformist camp more confident that FIFA would be able to nail Bin Hammam. People on the AFC executive committee are more or less giving up on him but are protecting their vested interests by teaming up,” one source said. “There are a number of people who came forward,” said another source.


In a meeting late last month, executive committee members effectively agreed to the chagrin of reformers to bury the audit conducted by PricewaterhouseCoopers (PwC) in exchange for consensus on the holding of AFC presidential and executive committee election in April in which Mr. Bin Hammam, a 63-year old Qatari national, would not be a candidate.
In anticipation of such a deal reformers engineered that responsibility of the AFC investigation based on the PwC audit was transferred from the Asian group to FIFA in advance of the executive committee meeting. The AFC enquiry was integrated into Mr. Garcia’s investigation of allegations that Mr. Bin Hammam had last year tried to buy the votes of Caribbean soccer officials for his failed bid to challenge long-standing FIFA president Sepp Blatter in presidential elections.


Mr. Bin Hammam has vigorously denied the allegations. The Swiss-based Court of Arbitration of Sport (CAS) earlier this year overturned FIFA’s banning for life of Mr. Bin Hammam from involvement in soccer because of the Caribbean allegations on the grounds that there was insufficient evidence. The court however went out of its way to say that it did not believe that Mr. Bin Hammam was innocent and advised FIFA to conduct a more proper investigation.
Mr. Bin Hammam has since been suspended from his FIFA and AFC offices pending the outcome of the investigation of his management of the Asian body.


Sources as well as Mr. Bin Hammam’s lawyer, Eugene Gulland in an interview with The Wall Street Journal confirmed that Mr. Garcia had dropped the enquiry into the Caribbean affair on the grounds that he had not uncovered any new evidence.
"This investigation focused on events that took place at the Caribbean Football Union meeting in Trinidad and Tobago in May 2011. With respect to the events at the CFU conference, the investigation uncovered no new material proof beyond the substantial evidence presented during the proceedings that culminated with the CAS decision vacating Mr Bin Hammam's ban. Accordingly, the Investigatory Chamber has closed this matter consistent with the CAS Panel's guidance regarding newly discovered evidence,” news reports quoted Mr. Garcia’s report as saying.


Mr. Gulland told the Journal that “we are vigorously challenging the provisional suspension. He said Mr. Bin Hammam was challenging his suspension pending the Asia-related investigation before CAS and Swiss courts.
Sources said Mr. Eckert, dependent on to what degree the reported new information adds to PwC’s assertion, could either pronounce on Mr. Bin Hammam’s fate or send the case back to Mr. Garcia for further investigation. Mr. Eckert has given Mr. Bin Hammam 45 days to respond to Mr. Garcia’s report.


The PwC report concluded in no uncertain terms that Mr. Bin Hammam had used an AFC personal account as his personal account. Mr. Bin Hammam has reportedly countered that monies withdrawn from that account or used for personal expenses constituted repayment of monies he had advanced to the AFC to ensure its cash flow. If so, the PwC assertions would amount to wrong administrative procedures rather than financial abuse.
The audit, because of PwC’s limited mandate and limited resources that AFC made available, stops short of drawing conclusions with regard to WSG but raises serious questions about the terms and negotiation of its marketing agreement, including payments to Mr. Bin Hammam totaling $14 million by a WSG shareholder in the walk-up to the signing of the contract.


PwC recommended in its audit that AFC seek legal advice to ascertain whether it could file criminal charges against Mr. Bin Hammam and cancel or renegotiate its WSG contract. “
The audit noted that the contract had not been put to tender and that it may be undervalued.


Referring to the payments to Mr. Bin Hammam by a WSG shareholder, the audit said: “It is highly unusual for funds (especially in the amounts detailed here) that appear to be for the benefit of Mr Hammam personally, to be deposited to an organization’s bank account. In view of the recent allegations that have surrounded Mr Hammam, it is our view that there is significant risk that…the AFC may have been used as a vehicle to launder funds and that the funds have been credited to the former President for an improper purpose (Money Laundering risk)” or that “the AFC may have been used as a vehicle to launder the receipt and payment of bribes.”
WSG, which has taken legal action against this reporter in order to squash media reporting and silence sources, has yet to comment publicly on the PwC report. However, in an August 28 letter to this reporter that first threatened legal action, WSG legal counsel Stephanie McManus asserted that “PWC are incorrect and misconceived in suggesting that the MRA (master rights agreement) was undervalued. They have neither considered the terms of the contract correctly, the market, nor the circumstances in which it was negotiated.” Ms. McManus’s comments failed however to address the bulk of the concerns raised by PwC.


James M. Dorsey is a senior fellow at the S. Rajaratnam School of International Studies and the author of The Turbulent World of Middle East Soccer blog