Palestinians call for taking UEFA tournament away from Israel 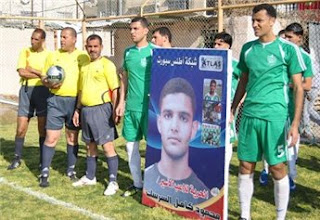 Palestinian Football Association president General Jibril Rajoub, in an escalation of mounting pressure on Israel to save the life of a hunger striking Palestinian soccer player in Israel prison, has called on European soccer body UEFA to strip Israel of the right to host the Euro 2013 Under-21 championship.

A 25-year old soccer player from the Gaza city of Refah, Mr. Sarsak has been on hunger strike for the past 88 days together with Akram al-Rekhawi, an imprisoned diabetic, and Samer al-Barq who both started their strike on dates more than a month after him. The three men refused to join hundreds of Palestinians in Israeli jail who ended their hunger strike on May 14 in demand of improved prison conditions because they were not included in an Egyptian-mediated deal.

Jawad Boulos of the Palestinian Prisoners’ Club, who visited Mr. Sarsak in Ramle prison on Tuesday described his medical condition as “dire.” He said Mr. Sarsak was determined to maintain his refusal to eat until he is released from prison.

Mr. Sarsak was put in administrative detention in 2009 as an “unlawful combatant” and has been held since without being charged. Israel has so far declined to say why Mr. Sarsak was detained at a military checkpoint as he was travelling from Gaza to the West Bank to join a Palestinian soccer team. Israeli sources privately suggest that he is suspected of being a member of Islamic Jihad, a Gaza-based militant Palestinian group.

In his letter to Mr. Platini, a copy of which was sent to FIFA vice president Prince Ali Bin Al Hussein,
General Rajoub said the detention of Mr. Sarsak as well as of two other Palestinian players earlier this year constituted “a direct violation of FIFA Regulations and Olympic charts. We ask Your Excellency not to give Israel the honor to host the next UEFA U21 2013 Championship,” the letter said. The tournament is scheduled to be held in Israel in June 2013.

General Rajoub’s call for moving the U21 competition to another country is likely to have been prompted by Mr. Sarsak’s deteriorating health condition as well as Mr. Blatter’s unusually blunt condemnation of the detentions.

In his June 12 letter to Israel Football Association (IFA) president Avi Luzon, Mr. Blatter expressed concern that Mr. Sarsak and two other Palestinian players were being “illegally” detained “in apparent violation of their integrity and human rights and without the apparent right of due process (trial).”

He called on the IFA “to act with the utmost urgency” given “the graveness of the … situation” to “draw the attention of the competent Israeli authorities to the present matter with the aim of ensuring the physical integrity of the concerned players as well as their right for due process.”

Israeli and Palestinian human rights groups have called for Mr. Sarsak to be moved from the Ramle prison clinic to a civilian hospital where he could receive better treatment. Soccer officials who are closely monitoring Mr. Sarsak’s case denied reports earlier this week that he had agreed to cushion his hunger strike by drinking milk. “It is absolutely not true,” one official said.

Palestinian peace negotiator and PLO Executive Committee member Saeb Erekat warned this week that Israel was responsible for the lives of Palestinians in Israeli prison.

There was no immediate Israeli response to General Rajoub’s demand.

Israel last month agreed to improve conditions for Palestinian prisoners in exchange for an end to the hunger strike of hundreds of inmates and a pledge by militant Palestinian groups, including Islamic Jihad, to honor a ceasefire. As part of the Egyptian negotiated deal to more family visits, Israel promised to end solitary confinement and limit a controversial policy that allows it to imprison people for years without charge. Israel had hoped the deal would avert the threat of public protests.

Islamic Jihad’s armed wing despite the ceasefire pledge last week claimed responsibility for a foiled attack in which an Israeli soldier and militant were killed. The group’s Saraya al-Quds (Jerusalem Brigades) said in a leaflet that one of its fighters, Ahmed Abu Nasser, was killed as he tried to cross into Israel from Gaza to kidnap Israeli soldiers. The group wanted to exchange the soldiers for Messrs. Sarsak, Al-Rekhawi and Al-Barq.

Israel has been tightlipped about why it has so far refused to accommodate Mr. Sarsak. Human rights groups said Israeli officials had promised to release Mr. Sarsak on July 1 if he agreed to end his hunger strike, but refused to put the offer in writing.

In contrast to Mr. Sarsak’s case, Israel has detailed its reasons for arresting earlier this year two other Palestinian players, Olympic soccer team goalkeeper Omar Abu Rwayyes and Ahmad Khalil Ali Abu El-Asal, who plays for the Aqabat Jaber Palestinian refugee camp soccer team. The two men are suspected of having been involved in a shoot-out in January with Israeli troops.

James M. Dorsey is a senior fellow at the S. Rajaratnam School of International Studies at Nanyang Technological University in Singapore, author of the blog, The Turbulent World of Middle East Soccer, and a consultant to geopolitical consulting firm Wikistrat.
Blatter FIFA Israel Palestine UEFA