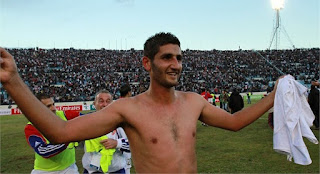 Defender Ali al-Saadi celebrates goal against South Korea (Source: FIFA.com)
By James M. Dorsey
In a country where almost every facet of life is defined by its sectarian fault lines, soccer is at least temporarily performing where politicians and religious figures have failed: rallying a divided country scarred by years of bitter civil war around a symbol of national unity.
Soccer’s achievement stems from its defeat of South Korea in a 2014 World Cup qualifier.
It took a first goal from defender Ali al-Saadi to convince the 60,000 fans in Beirut’s Cite Sportive stadium to shift from sectarian chants to egging on their team with roars of "Minshan Allah, Libnan yallah'' - "For God's Sake, Lebanon Come On'' – to historic 2-1 win over their favoured Asian opponents.
Tens of thousands of fans poured into the streets of the Lebanese capital waving the country's red and white flags with a green cedar in the middle. Traffic came to a halt and for a moment sectarian differences that have deeply divided the country for decades were superseded by a sense of national pride.
However to cement its achievement on and off the soccer pitch, the Lebanese national team would have to score the one more point it needs against a so far winless United Arab Emirates squad. If that fails, it could still make it to the fourth qualifying round if Kuwait follows its example and upsets South Korea’s apple cart.
"Sports can do what religion and politics can't, gather the Lebanese people around a common thing. The national team changed the point of view to many football fans, and it united them for one goal, to participate in World Cup 2014. This was a very good step to help people to leave their political and religious views behind and watch their team without reverting to riots or gang wars,” The Associated Press (AP) quoted Lebanese supporter Serge Mghames as saying.
If the experience of Iraq whose national team became Asian champion in 2007 at a time that the country was wracked by sectarian bloodshed or Abbas Suan, a devout Palestinian Israeli Muslim who refused to sing the Hatikva, Israel’s national anthem, when it was played before a game but united in 2006 Israeli Jews and Arabs by securing with a last minute equalizer against Ireland Israel’s first chance in 35 years to qualify for a world cup is anything to go by soccer’s unifying effect is lost as soon as the team no longer performs.
For Lebanese soccer to succeed where the game ultimately failed in countries like Iraq and Israel is a tall order against the backdrop of bitter feuds between Lebanon’s four million inhabitants who are divided among 18 Muslim and Christian sects and 15 years of civil war that ended with a fragile peace in 1991.
That peace has this year repeatedly been put to the test with militant Shiite group Hezbollah supporting embattled President Bashar al-Assad in neighbouring Syria and a United Nations-backed tribunal indicting four members of the group on charges of involvement in the 2005 assassination of former Sunni Prime Minister Rafik Hariri.  Hezbollah has denied involvement in the killing and has vowed never to turn over the suspects.
If that were not enough of a challenge, Lebanon’s national team would find it difficult if not impossible to significantly undermine sectarianism which is so deeply rooted in the country’s game that the government banned fans from attending domestic league matches following Mr. Harriri's assassination.
"There are no guarantees in football. We can only guarantee that we will go about our job in a professional manner. We are in good form, but don't write off the Emirates,'' said Theo Bucker, the national team’s German coach, sounding a cautionary noted according to FIFA.com.
The government lifted the ban on fans in October, but by then the damage had been done. The ban devastated the game: its domestic league all but collapsed and the national team was drained of potential talent. As a result, Lebanon fell in world soccer body FIFA’s rankings from 125 to 178 but has rebounded to 111 with its defeat of South Korea.
"Politics came into football and destroyed it," said Rahif Alameh, secretary-general of the Lebanese Football Association, who dates the "death of football" to 2001, the year when the government intervened in a murky match-fixing scandal rather than the 2005 ban on fans. That was when Lebanon's political-religious leaders began treating the association as a pie to be carved up, just as they share power among Muslim and Christian communities.
Mr. Hariri, for example, sponsored several clubs and bought Nejmeh soccer club, Lebanon’s most popular team, which was largely cross-sectarian, but had always attracted much Shiite support. Mr. had Hariri initially ventured into sports as a moneymaking venture, but later turned his teams into vehicles for consolidating his Sunni Muslim support. Virtually every Lebanese soccer club is identified in sectarian and political terms -- Maronite Christian, Sunni, Shiite, Druze or Armenian with certain political factions -- even if the team’s players are religiously mixed. Those identities have been reinforced by the aftermath of Mr. Hariri’s assassination.
"Football had just (become an extension) of politics. Everything in Lebanon is politicized, the air we breathe is politicized.,” Mr. Alameh told AP.
James M. Dorsey is a senior fellow at the S. Rajaratnam School of International Studies at Nanyang Technological University in Singapore and the author of the blog, The Turbulent World of Middle East Soccer.
Lebanon World Cup 2014