Football against the dictators 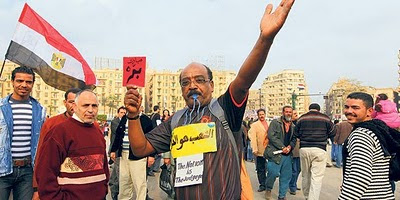 An anti-government protester dressed as a football referee shows a symbolic red card to Egyptian President Hosni Mubarak, in Cairo’s Tahrir Square in this, Feb. 7 file photo. The protests, which saw tens of thousands of people massing daily in Cairo for demonstrations that at times turned violent.

“I had been waiting for that moment for 14 years. Before the game I remembered my feelings watching TV as a teenager, and that boosted up my anger. I am happy to have been able to give this gift to the older generation, the ones that lived through the war.”

This quote came from Dutch goalkeeper Hans van Breukelen after his team won a 1988 European Football Championship semifinal game versus Germany, which ruled his homeland during World War II under Adolf Hitler. British journalist Simon Kuper notes in his famous book, “Football against the Enemy,” that 60 percent of the population hit the streets to celebrate their 2-1 win over Germany that year. Coach Rinus Michels also pointed out at the time, “We won the tournament, but we all know that the semifinal was the real final.”

It is no secret that Mussolini used football for his political interests and took advantage of the 1934 World Cup to promote his fascist regime. Just like his Italian counterpart, Spanish dictator General Francisco Franco was involved in the world of football and is believed to have supported Real Madrid. According to Kuper’s book, Lithuanian Prime Minister Andrius Kubilius, who was a member of the pro-independence Sajudis movement at the time, said that football, along with basketball, played a vital role in the Lithuanian struggle for independence. The nation was able express themselves only through sports in the early state.

Many more examples of when football and politics meet or even clash can be brought to the table. It is an indisputable fact that football is more than just a sport for millions of people across the world. It has proven its relationship with political and financial actors and conditions many times over. Currently, this particular sport has taken a similar role in recent and ongoing incidents against dictatorial regimes. While the leading actors in these countries try to tame football and its fans in various ways, including the suspension of leagues, the football fans have been on the front line of anti-government protests.
Tahrir Square organization

“Soccer fans played a key role in the toppling of the authoritarian Egyptian leader,” James Dorsey, who runs a famous blog on Middle East football (mideastsoccer.blogspot.com), tells Sunday’s Zaman. Dorsey, a senior research fellow at the National University of Singapore’s Middle East Institute, says that in the aftermath of the successful protests that toppled dictator leader Hosni Mubarak, football fans now demand the resignation of pro-Mubarak football personalities, including the Egyptian national team’s coach and board members of the football club Zamalek, archrival of Al-Ahly, whose fans played an important role in anti-government protests in Egypt.

According to Dorsey, football fans are a mirror of popular social feelings when the issue does not have much to do with sparking a revolution. “In the Middle East, soccer is often the only subterfuge or release valve for any kind of critical expression,” he says. In his blog, Dorsey quotes an Egyptian activist as saying, “Religion is no longer the opium of the people, it’s football.” He adds that fans were among the protestors in Tunisia as well.

British journalist and author Kuper, whose “Football against the Enemy” won a coveted William Hill Sports Book of the Year award in 1994, says football fans are among the rare groups that communicate with each other and have some power in dictator regimes.

“They can be figures in a revolution. What we saw in Tahrir Square was much more than that. It would be wrong to suggest that these people made the revolution. But certainly they can play a role in this big event,” he tells Sunday’s Zaman. While noting that there are not many organized groups in countries governed by dictatorships, Kuper highlights that this situation makes football fans more important than they are in a free society.

The British author likens the situation in Egypt to the example of former Yugoslavia, where a war was going on in the early 1990s. The fans of Croatian side Dynamo Zagreb and Serbian side Red Star clashed violently with political motives, as Croatians were seeking independence in a country ruled by authorities who favored Serbs. “They were organized men, they were in communication and they had organized leaders, as hooligan groups usually do,” Kuper explained.
Egypt Football Soccer