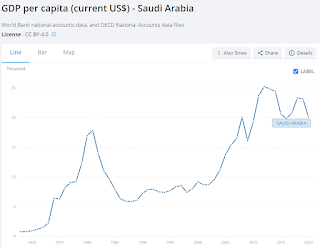 The World Bank issued a stark warning in its 2018 outlook for the Saudi economy. “The Kingdom likely faces a looming poverty problem,” the bank said.

The bank has since noted in its 2019 and 2020 outlooks that “while no official information is available on poverty, identifying and supporting low-income households is challenging.”

Dependent on world oil prices, the curve of Saudi gross domestic product (GPD) per capita never was a straight line upwards. Instead, it ebbed and flowed.

In one such ebb and flow, Saudi GDP per capita dropped by almost half from a peak of US$ 17,872 in 1981 to $8,685 in 2001, the year in which 15 Saudi middle-class nationals constituted the majority of jihadists who flew aeroplanes into New York’s World Trade Towers and the Pentagon in Washington.

2001 was a year in which many Saudis struggled to make ends meet amid depressed oil prices and then King Abdullah’s efforts to introduce a measure of Saudi fiscal restraint. Many held two and three jobs.

"Prior to the Gulf War, we didn't pay rent in student dormitories -- now we do," a Saudi student enrolled in Saudi Arabia's prestigious King Fahd Petroleum and Minerals University told this writer at the time.

"In the past, it didn't matter if you didn't complete your studies in five years. Now you lose your scholarship if you don't. Soon we'll be asked to pay for tuition. Before the Gulf War, you had 10 job offers when you graduated. Now you're lucky if you get one," the student said referring to the US-led reversal of the Iraqi invasion of Kuwait.

"There's nothing to do here but sit around, watch television and smoke shisha," added Abdulaziz, one of the student’s friends using the Arabic word for a water pipe. "There's nothing we can do to change things. That's why we get married early, only to discover that it was a mistake."

Saudi GDP per capita has dropped again, although less dramatically, from $23,337 in the year that the World Bank warned about looming poverty to $20,110 in 2020.

On a positive note, the bank reports that while “poverty information and access to survey data to measure welfare conditions have been limited” Saudi Arabia has seen “gains in administrative capacity to identify and support low-income households.” The bank warned, however, that the middle class could be most exposed to the pains of austerity and fiscal restraint.

To be sure, the Saudi Arabia of the turn of the century is not today’s kingdom. Despite Saudis having constituted more recently one of the larger contingents of foreign fighters in the Islamic State, Saudis are unlikely to respond today to a unilateral rewriting of a social contract that promised cradle-to-grave-welfare and potential economic hardship by drifting towards militancy and extremism at a time that a young Saudi crown prince has promised massive change and delivered some.

Prince Mohammed bin Salman has liberalized social mores, rolled back the influence of ultra-conservative clerics, created greater leisure and entertainment offerings, and enhanced women’s rights and professional opportunities as part of his plan to wean the kingdom off dependency on oil exports and diversify the Saudi economy. He has simultaneously significantly tightened the political aspect of the kingdom’s social contract involving the public’s absolute surrender of all political rights, including freedom of expression, media, and assembly.

In exchange, Prince Mohammed’s Vision 2030 reform plan promises, according to the World Bank, to protect citizens from the pain of economic change by “modernizing the social welfare system, redirecting price subsidies toward those in need, preparing and training those unable to find employment, and providing tailored care and support to the most vulnerable citizen.”  In doing so, the government has sought to soften the impact of higher energy prices as well as the introduction tripling of value-added tax (VAT) and expatriate levy.

More than social protections, Vision 2030 is about creating jobs for Saudis in a country where unemployment was 11.7 per cent in the first quarter of this year.

Saudi Arabia’s private sector has reportedly created in the last three years a third of the 1.2 million new jobs the kingdom needs to generate by 2022 to meet its unemployment target. The kingdom’s statistics agency said the first-quarter unemployment was the country’s lowest in nearly five years, but the decline was partly driven by people dropping out of the labour force rather than new job creation.

Prince Mohammed asserted in May in a wide-ranging interview that “we have 200,000 to 250,000 people getting into the job market each year and public sector jobs are limited.”

Taking tourism as an example, the crown prince said the development of the industry would create three million jobs, one million of which would be for Saudis who over time could replace ex-pats who would initially fill two-thirds of the openings.

“Once we create three million jobs, we can Saudize them in the future. There are also jobs in the industrial sector and so on,” Prince Mohammed said. He predicted at the same time that the percentage of foreigners in the kingdom could increase from a third of the population today to half in the next decade or two.

Writing about the changing social contract in Saudi Arabia, scholars Mira Al Hussein and Eman Alhussein cautioned that the government needs to manage rapid economic and social change, in part by providing clearer information to the public. The scholars identified issues involving rights of foreigners versus rights accorded children of mixed Saudi-non-Saudi marriages, the rollback of religion in public life, and austerity measures as potential points of friction in the kingdom.

“The ramifications of existing grievances and the increasing polarization within Gulf societies…as well as the extensive social engineering programs have pitted conservatives against liberals. Arab Gulf States’ ability to redefine their social contracts without turbulence will depend on their tactful avoidance of creating new grievances and on solving existing ones,” the scholars said.

Dr. James M. Dorsey is an award-winning journalist and a senior fellow at the National University of Singapore’s Middle East Institute
Saudi Arabia