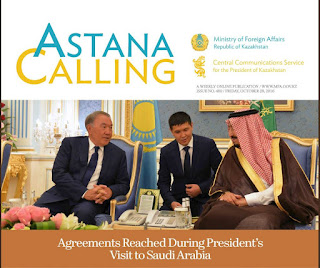 A recent study of the popularity of a Saudi-inspired quietist ultra-conservative strand of Islam among Kazakh businessmen suggests that the kingdom has upgraded its faith-driven soft power campaign as part of crown prince Mohammed bin Salman’s vow to promote an undefined form of moderate Islam at home and abroad.

The upgrade represents a significant departure from the kingdom’s more than four-decade long, US$100 billion campaign to globally promote ultra-conservative, anti-Shiite, anti-Iranian strands of the faith through religious, educational and cultural activities that often focused on the lower and lower middle classes.

Prince Mohammed has, since coming to office in 2015, significantly cut funding of the campaign, focusing it primarily on regions of geopolitical importance to the kingdom such as parts of Yemen and the Pakistani province of Balochistan.

The upgrade retains a key pillar of the campaign that caters to the survival strategy of the Al Sauds, the kingdom’s ruling family, as well as the strengthening elsewhere of autocracy and authoritarianism: the principle of absolute obedience to the ruler.

The Kazakh businessmen, like significant portions of the militia of renegade Libyan general Khalifa Belqasim Haftar that is marching on Tripoli as well as Saudi-supported Islamic scholars in Algeria, are followers of Saudi Sheikh Hadi Ben Ali Al-Madkhali.

Sheikh Al-Madkhali’s father, Sheikh Rabia Al-Madkhali, is the intellectual father of a quietist strand of Salafism that projects the kingdom as the ideal for those who seek a pure Islam that has not been contaminated by non-Muslim cultural practices and secularism.

The upgrade and its influence on segments of the Kazakh business community gives Saudi Arabia an additional string in its bow in the kingdom’s rivalry with Turkey for leadership of the Muslim world that is primarily fought politically and economically.

Pan-Turkic sentiment in Kazakhstan, despite differences with Turkey over the continued operation of schools in the Central Asian republic by Fethullah Gulen, the exiled preacher whom Turkish president Recep Tayyip Erdogan holds responsible for a failed military 2016 coup, and other parts of Central Asia has been fuelled by Russia’s annexation of Crimea.

Central Asian leaders, including Mr. Nazarbayev, who retains significant influence despite stepping down, hope that increased Gulf investment, particularly from the United Arab Emirates, will enhance their margins of manoeuvrability in a region dominated by two behemoths, Russia and China.

As a result, Gulf investment alongside Saudi faith-driven soft power are potential players in the 21st century’s Great Game, the rivalry for influence, if not dominance, of the Eurasian landmass.

The Gulf efforts take on added significance if Russian scholar Dmitry Zhelobov’s prediction proves true that an alignment of Russian and Chinese interests in the Great Game could prove to be short-lived.

Mr. Zhelobov warned in a recent interview that garnered significant interest in Moscow that China was gradually establishing military bases in Central Asia to ensure that neither Russia nor the United States would be able to disrupt Chinese trade with the Middle East and Europe across the Eurasian heartland.

Echoing Mr. Zhelobov, Eurasia scholar Paul Goble warned that “Moscow has given remarkably little consideration to the possibility that China will build on its soft power in Central Asia to establish security relationships or even bases and thus accelerate the decline of Russian influence there.”

The upgrade to faith-driven Saudi soft power is evident in the vehicles it employs. They no longer rely primarily on Islamic scholars working out of mosques or educational institutions funded by the kingdom. Instead, they are, for example, local businesspeople who operate their businesses on principles of Islamic law such as a ban on interest.

“In post-Soviet Central Eurasia, the Islam of the ‘disinherited’…has today morphed into something approaching a prosperity theology,” said Aurelie Biard, the author of the Brookings study that focusses on Kazakhstan, a country that effectively bans ultra-conservative strands of Islam.

“Saudi Arabia is the homeland of Islam, it is a desert land, but they received a bonus from Allah—oil—to help them spread the true religion. Saudi Arabia is not pure sharia, but is the closest to it,” said Ilya, a US-educated Kazakh entrepreneur portrayed by Ms. Biard.

His community is populated by entrepreneurs whose Islamic practice, including the wearing of long beards and public display of religious rituals such as praying five times a day, excludes them from employment in the public sector.

Kazakh law bans prayer in public buildings and gives the government a veto on what religions may or may not preach, according to Joanna Lillis, author of recently published ‘Dark Shadows, Inside the Secret World of Kazakhstan.’

Operating businesses ensures that the community is not dependent on charitable Saudi funding that is viewed with suspicion by the government. The businessmen’s religiosity however gives them access to the Saudi market as well as Saudi commercial funding.

“Halal business…has become a vehicle for a group of economic-cum-religious entrepreneurs to engage in Salafi preaching in Kazakhstan without running afoul of legal restrictions,” Ms. Biard said.
Their influence is substantial. As models of piety, they are “reshaping Kazakhstan’s religious landscape and forms of communal identity in a Kazakh society that is increasingly contending with politicized religious divisions and competing visions of religious authority,” she said.

Said Ilya, who won a US$7 million Saudi contract to build a tuberculosis hospital for children: Proselytization or dawah “is dangerous now, it is forbidden by the law, but we do it anyway. As an entrepreneur, I want to lead by example, that of a rightly guided Muslim and show Islam as a way of life. I have the intention (niyya) of working for Allah through my business,”

Ilya cropped his beard and adapted his public style of prayer as a safeguard against government retribution.

His strategy and by implication that of Saudi Arabia is an adaptation of ‘the march through the institutions’ propagated by German left-wing leader Rudi Dutschke in the 1960s during the student protests.

“As a Salafi, you can be a partisan inside, it is hidden. You can get as close as possible to your enemies and still be a Salafi. You can work in the White House, in the Kremlin. This is the power of aqeedah (religious belief system): You can even be close to Putin and still you are a Salaf,” Ilya said.