Playing US sanctions: China walks a fine line in Iran 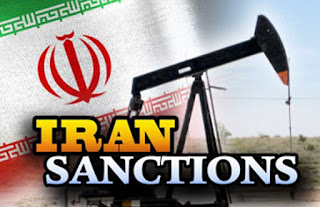 Chinese businessman Sheng Kuan Li didn’t worry about sanctions when he decided in 2010 to invest $200 million in a steel mill in Iran that started producing ingots and billet within months of the lifting of punitive measures against the Islamic republic as part of 2015 international nuclear agreement with Iran.

With no operations in the United States, Mr. Li was not concerned about being targeted by the US Treasury. Mr. Li, moreover, circumvented financial restrictions on Iran by funding his investment through what he called a “private transfer,” a money swap that was based on trust and avoided regular banking channels.

In doing so, Mr. Li was following standard Chinese practice of evading the sanctions regime by using alternative routes or establishing alternative institutions that were in effect immune.

To be able to continue to purchase Iranian oil while sanctions were in place, China, for example, established the Bank of Kunlun to handle Chinese payments.

The Chinese experience in circumventing the earlier sanctions will come in handy with Beijing rejecting US President Donald J. Trump’s renewed effort to isolate Iran and force it to make further concessions on its nuclear and ballistic missiles programs as well as the Islamic republic’s regional role in the Middle East by walking away from the 2015 agreement and reintroducing punitive economic measures.

Chinese foreign ministry spokesman Geng Shuang said in response to Mr. Trump’s announcement that the People’s Republic was committed to the deal and would “maintain communication with all parties and continue to protect and execute the agreement fully.”

China’s likely willingness to circumvent US sanctions is one factor that will influence Iran’s decision on whether it will stick to the agreement. Iran’s decision depends on the readiness and ability of the other signatories - Britain, France, Germany and Russia – to also stand up to the United States.

China’s experience in circumventing sanctions could come in handy as Europe, that like China has rejected Mr. Trump’s move and vowed to ignore the sanctions, weighs ways of putting its money where its mouth is by attempting to shield European companies from potential US punitive action. One possibility would be to use alternative Chinese financial networks.

China and other signatories are in the wake of the re-imposition of US sanctions likely to be operating in a far more confrontational environment in which the subtext of Mr. Trump’s decision as well the positions of Saudi Arabia and Israel appears to be a policy that seeks to achieve regime change in Tehran.

Saudi Arabia as well as the United Arab Emirates have suggested in recent months in their 11-month old economic and diplomatic boycott of Qatar that they are willing to quietly sanction those who fail to support them.

There is little reason to doubt that they would do the same in their confrontation with Iran with Saudi Crown Prince Mohammed bin Salman describing the dispute with Qatar as “trivial’ in comparison to the kingdom’s existential battle with Iran.

Saudi Arabia demonstrated its greater assertiveness by forcing major multi-national financial institutions to choose sides in the Gulf spat. In response to Saudi pressure, JP Morgan and HSBC last month walked away from participating in a $12 billion bond sale.

Earlier, Doha Bank, Qatar’s fifth-biggest lender, was forced to reduce the size of a two-year, $575 million bank loan that it had raised in December 2015 to $400 million, when it sought a one-year extension of the facility because Chinese, Hong Kong and Japanese banks opted not to participate.

In the utmost consequence, China’s concerted effort to remain aloof of the Middle East’s multiple conflicts could be severely compromised if it were forced to take sides in a conflict between Iran, a country with which China feels that it has much in common and that it in the past has helped develop its ballistic and nuclear programs, and Saudi Arabia, a more recently found friend that is economically important to the People’s Republic.

To be sure, greater Saudi assertiveness does not mean that the kingdom does not have to tread carefully in potentially seeking to penalize China and others for their potential refusal to go along with Mr. Trump’s confronting of Iran.

Saudi Arabia desperately needs foreign investment to implement Prince Mohammed’s Vision 2030, a far-reaching plan for social and economic reform that aims to diversify the kingdom’s conservative society and oil-dependent economy and turn it into a 21st century, knowledge-based state.

China, moreover, is one of Saudi Arabia’s foremost oil export markets. While the Saudi military remains focussed on US and European arms purchases, China, at a time that a military confrontation with Iran is not beyond the realm of the possible, is a source of weaponry the United States has been so far unwilling to sell to the kingdom.

With the United States refusing to share its most advanced drone technology, China agreed last year to open its first overseas defense production facility in Saudi Arabia. State-owned China Aerospace Science and Technology Corporation (CASC) will manufacture its CH-4 Caihong, or Rainbow drone as well as associated equipment in Saudi Arabia. The CH-4 is comparable to the US armed MQ-9 Reaper drone.

Leveraging its experience, an effort by China together with Russia and Europe that keeps the Iranian nuclear deal in place and thwarts US sanctions would deliver one of the heaviest body blows to US credibility and perceptions of US power since Mr. Trump came to office in January of last year.

Said a Middle Eastern diplomat: “A successful countering of US sanctions would demonstrate beyond doubt limits to America’s ability to impose its will. That would have wide-reaching consequences, not in the least question marks in Saudi Arabia and Israel on the degree to which they can risk continuing putting most of their eggs in Washington’s basket.”