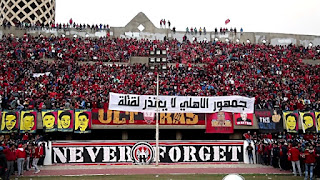 Although the sentences of one year in prison handed down by a Cairo court were relatively light by the standards of a judiciary that has sent hundreds of regime critics to the gallows and condemned hundreds more to lengthy periods in jail, it threatens to close the door to a dialogue that had seemingly been opened, if only barely, by Mr. Al Sisi.

Mr. Al Sisi’s rare gesture came in a month that witnessed three mass protests, two by soccer fans in commemoration of scores of supporters killed in two separate, politically loaded incidents, and one by medical doctors – an exceptional occurrence since Mr. Al Sisi’s rise to power in a military coup in 2013 followed by a widely criticized election and the passing of a draconic anti-protest law.

In a telephone call to a local television in reaction to a February 1 gathering of Ultras Ahlawy, the militant support group of Zamalek arch rival Al Ahli SC, in honour of 72 of their members who died in 2012 in a brawl in the Suez Canal city of Port Said, Mr. Al Sisi offered the fans to conduct an investigation of their own.

The brawl was widely believed to have been an attempt that got out of hand by security forces and the military to teach the ultras a lesson after they had played a key role in the 2011 popular revolt that toppled President Hosni Mubarak as well as in mass anti-government protests against subsequent governments, including post-coup student protests to which Mr. Al Sisi responded with an iron fist.

The ultras argue that the real culprits were excluded from court proceedings in which eleven fans of Port Said’s Al Masri SC were sentenced to death and 25 others, including a former security chief were given hefty prison terms on charges that they were responsible for the incident.

“I call on the Ultras to choose ten of their members whom they trust to be part of a committee to look into all the details concerning this case and determine what more can be done,” Mr. Al Sisi said in the phone call.

” We can't be the judge and the jury at the same time in the Port Said massacre trial… The president's invitation to the group to be part of the investigations is unexpected and shows that he is paying attention," the ultras said in a statement.

The president gesture’s constituted an extraordinary acknowledgement of the power of the ultras even if they have been on the receiving end of his effort to suppress all dissent. The exchange moreover, involving a response by the ultras in language and substance that displayed an unusual degree of political sophistication, appeared despite the rejection of Mr. Al Sisi’s offer to create a basis for further dialogue.

That seemed also to be true for the government’s restraint in responding to a protest days later by the Ultras White Knights (UWK), the militant Zamalek support group, commemorating the death of 20 of its members in clashes with security forces in February 2014. An Egyptian court has ordered a new investigation of the incident that prosecutors and Zamalek chairman Mortada Mansour charged had been instigated by the outlawed Muslim Brotherhood.

The government also refrained from breaking up a protest by thousands of doctors against the treatment of medical personnel in hospitals by security forces.

A larger than life figure and member of the recently elected parliament who basks in controversy, Mr. Mansour sparked an uproar in January in the assembly’s first meeting when he refused to take the prescribed constitutional oath, saying he disliked the wording that recognized the 2011 revolt.

Mr. Mansour, who alleges that the UWK attempted to assassinate him when members of the group through a plastic bag filled with urine at him, has been in the forefront of efforts to persuade the courts to ban the ultras as terrorist organizations.

The regime’s brief change of attitude towards seemed to be an effort to engage at a time that criticism of Mr. Al Sisi is mounting because of his inability to deliver economically, harsh repression and failure to gain the upper hand in a mushrooming insurgency in the Sinai Peninsula.

Mr. Al Sisi moreover didn’t do himself any favours when recently a massive red carpet was laid over public roads for his motorcade during a trip to open a social housing project in a Cairo suburb.

"How is the president asking us to tighten our belts while the four-kilometre red carpet says otherwise?" read a headline in Al-Maqal newspaper, whose editor-in-chief, Ibrahim Eissa, is one of Egypt's most prominent TV commentators.

“As Sisi’s excesses continue, new alliances of convenience and cooperation will form among unexpected allies. Muslim Brotherhood sympathizers may once again align with secular groups; military factions may find the Brotherhood a useful ally against a rogue president. Voices in the media will begin to speak up. Criticism on social media will begin to build up a revolutionary head of steam. One day, Sisi will be replaced — probably not democratically,” noted Stephanie Thomas, a Reuters reporter who covered the 2011 uprising.

That may well have been on the mind of Mr. Al Sisi, who is keenly aware of the role soccer fans have played in the history of Egyptian protest, when he made his offer.

The sentencing of the 15 UWK members and the earlier blocking of Ahlawy members to get into a stadium where Zamalek and Ahli were scheduled to kick off in a derby threatens to slam the door even before it really swung open to a dialogue that could help Egypt tackle its multiple problems.

Mr. Al Sisi could still rescue the situation by lifting the ban on spectators attending soccer matches that has been in place for much of the last five years. Lifting the ban is one of the ultras’ prime demands.  The risk of stadiums again becoming a prime venue for the venting of pent-up anger and frustration and political protest is however a risk that Mr. Al Sisi more likely than not doesn’t dare run.

James M. Dorsey is a senior fellow at the S. Rajaratnam School of International Studies, co-director of the University of Würzburg’s Institute for Fan Culture, and the author of The Turbulent World of Middle East Soccer blog and a forthcoming book with the same title.
Al Ahly (Egypt) Al Zamalek Egypt Ultras