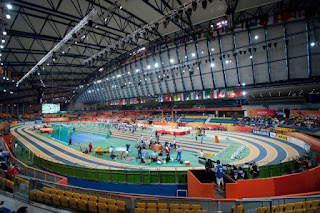 Mr. Engh’s initial impression that the government was catering to the whole of its population, a majority of whom are poorly paid migrant workers whose restrictive labour and working conditions have become a focal point of criticism since Qatar won the hosting rights for the 2022 World Cup were however quickly dashed.

“It looked great and I was happy to see that the Qatar people cared enough to allow kids to come in and play in this magnificent facility. I was wrong. Not every local kid was allowed. It was open to only those that had money,” Mr. Engh said in a recent Huffington Post column.

Chatting with a group of nearby migrant workers recruited to keep Aspire Dome clean, Mr. Engh quickly discovered that neither they nor their children had access to the soccer field. In response to Mr. Engh’s question whether any of their children were among those, the workers “looked at me as if I were some kind of world-class comedian trying my best to humour them,” he wrote. Asked what facilities were available for poor kids, the workers replied: "Nowhere."

Nobody seemed bothered by Qatar’s segregation of rich and poor and marginalization of a majority of the population when Mr. Engh recited his experience during one of the gathering’s many sessions that are often geared to projecting Qatar’s support for the disadvantaged. It was, he wrote, “Business as usual. The haves and the have-nots, Qatar style.”

Mr. Engh’s encounter with the workers happened three years ago. Qatar has since announced lofty standards for the working and living conditions of migrant workers, including the construction of seven new cities to accommodate those working on World Cup-related construction sight. It has also said that reforms of its controversial kafala or sponsorship system that puts workers at the mercy of their employers would be enshrined in law by the end of this year.

For now, Qatar’s promises remain just that, promises. Credibility Qatar built in recent years by announcing the standards in for a conservative, autocratic Gulf state unprecedented collaboration with human rights and labour activists has been thoroughly wasted.

Qatar’s credibility has been undermined by its failure to take meaningful steps that would have enhanced confidence even if in some instances they would have broached the existential issues underlying Qatari resistance to change or addressed material concerns. It was further jeopardized by seeming Qatari backtracking on baby steps that held out the promise of change, and its repeated detention of foreign journalists seeking to report independently and unfettered on the plight of migrant workers.

At the core of Qatari resistance, is the fear of the Gulf state’s citizenry, who account for a mere 12 percent of the population, that granting foreigners any rights risks opening a Pandora’s Box that could lead to non-Qataris gaining political rights and easier access to citizenship. Similarly, many Qataris are anxious that engagement with the non-Qatari majority that could give it a stake in society would amount to acknowledging that their multi-ethnic, multi-religious demography is in fact a multicultural society in more than just a slogan – a step that would threaten to delude the Gulf state’s conservative, tribal, mono-culture.

Mr. Engh put his finger on the problem but appears to have overlooked these real life issues underlying effective segregation at the Aspire Dome. His observations did however put a hole in Qatari rhetoric of the value it attributes to foreigner that are helping it build a state-of-the art infrastructure.

They highlighted the fact that Qatar like other Gulf states at best views foreigners as guests obliged to leave when their professional contracts expire. Rather than adhering to universally accepted concept of a guest who is made to feel at home, Qatari policy is designed to ensure that non-Qataris do not develop ties that could persuade them to want to make Qatar their permanent home.

To be fair, Qatar is not unique in this. Even traditional immigration societies like Australia appear hostile to migrants and the mood in Europe has soured as tens of thousands of refugees from conflicts in the Middle East and repressive regimes in Africa force their way onto the continent. Yet Qatar in line with all Gulf states has preferred to fund aid to the refugees rather than open its own doors.

Nonetheless, Qatar two years ago appeared to be tinkering with its non-integration policy when it organized its first ever tournament for soccer teams of foreign workers in which 16 teams participated. Qatari officials at the time said they were considering a competition in which foreign worker teams would play their Qatari counterpart.

The plan never materialized and the chances of foreign workers and their kids being allowed to play in the Aspire Dome are without a demonstration of political will to introduce real reform virtually zero. Qatar’s credibility was further damaged by its crude efforts in the last year to fill stadia during international matches by bussing in foreign workers who were paid to attend a match rather than given the opportunity and access that spectators would expect to have.

An announcement earlier this month by California-based big data software company Sysorex that it had concluded a contract to deploy in Qatar a mobile “worker locationing and asset management platform” that would track migrant workers in their living quarters as well as in living quarters, recreation, healthcare, and retail facilities that they frequent sparked criticism from human rights and labour activists.

They denounced the move despite Sysorex’s effort to project the platform as a tool that would provide “insight into how residents flow through the community, which facilities are most popular, and where improvements can be made” as well as a technology that would improve first response in cases of emergency.

Citing the multiple problems with the sponsorship system, Human Rights Watch’s Nicholas McGeehan quipped: “Passport confiscation, recruitment fees, sponsorship-based employment, the prohibition of trade unions, and absence of grievance mechanisms combine to a toxic effect in Qatar. The last thing we need is yet another control mechanism.”

James M. Dorsey is a senior fellow at the S. Rajaratnam School of International Studies as Nanyang Technological University in Singapore, co-director of the Institute of Fan Culture of the University of Würzburg and the author of the blog, The Turbulent World of Middle East Soccer, and a forthcoming book with the same title.
Qatar World Cup 2022