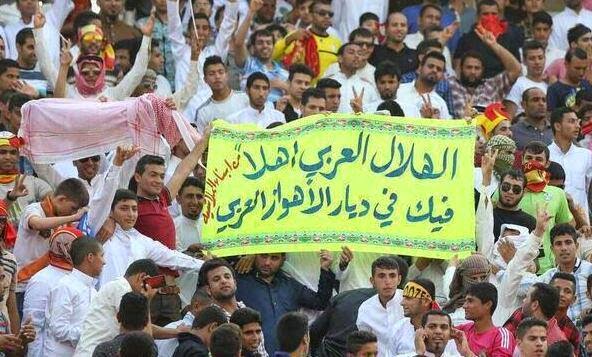 Long-simmering discontent in Ahwaz, the soccer-crazy, predominantly ethnic Arab capital of Iran’s Khuzestan province that Iraqi president Saddam Hussein unsuccessfully tried to exploit when he launched the Iran-Iraq war in 1980, exploded on the pitch earlier this month during an Asian championship League qualifier between the city’s state-owned Foolad FC and Al Hilal of Saudi Arabia.

Anti-government protests during the match in which Iranian fans declared support for the Saudi opponent of their home team defied the fact that Saudi Arabia is fighting across the Middle East a proxy war with the Islamic republic that the kingdom frames in terms of sectarian differences between Sunni and Shiite Muslims.

Soccer fans defiantly expressed support for Al Hilal during the match and burnt pictures of Ayatollah Ruhollah Khomeini, the late spiritual leader who spearheaded the 1979 Iranian revolution that toppled the Shah Mohammad Reza Pahlavi, and his successor, Ayatollah Ali Khamenei. Fans also sported banners emphasizing the Arab character of Ahvaz. Scores were arrested as fans fought police near the stadium for three hours after the match.

The opposition National Council of Resistance of Iran said that fans further carried banners declaring that “We are all Younes,” a reference to a street vendor who immolated himself a few days before the match in the nearby city of Khorramshahr. The Human Rights Activists News Agency (HRANA) established by Iranian activists said the vendor set himself on fire after municipal officials seized his grocery kiosk. The agency said Mr. Younes was operating his kiosk although he had yet to have his application for a license approved.

Support for the Saudi team by fans in Ahvaz whose ethnic Arab population is Shiite in majority took on greater symbolic value against the backdrop of Saudi efforts to forge an alliance of Sunni nations and groups to counter the feared expansion of Iranian influence in the region if and when it reaches agreement with the five permanent members of the UN Security Council and Germany on the future of its nuclear program and the lifting of sanctions against the Islamic republic. The negotiators hope to achieve agreement before a deadline at the end of this month.

Habib Jaber Al-Ahvazi, a spokesman for the Arab Struggle Movement for the Liberation of Ahwaz (ASMLA), a group that demands independence for Ahvaz and is believed to be responsible for a series of bomb attacks in the city in 2005, 2006 and 2013, told online Arab nationalist Ahvaz.tv that the soccer protest was part of an “ongoing confrontation between demonstrators and the forces of the Persian occupation.” Mr. Al-Ahvazi said the immolation of Mr. Younes had sparked the protest.

Iran’s state-run Press TV has broadcast confessions of captured ASMLA members who said they had carried out scores of attacks. The detainees said they had received funding and training in Dubai. They said the targets of their attacks had been pipelines and other oil infrastructure.

ASMLA operatives have maintained contacts with rebels fighting the Iranian-backed regime of Syrian President Bashar al-Assad. A no-longer existent unit of the defunct Western-backed Free Syrian Army named itself the Al-Ahwaz Brigade while the ASMLA used references to the anti-Assad rebels to identify their attacks in Khuzestan. ASMLA has also expressed support for insurgents in Iran’s Baluchi and Kurdish provinces whom the government in Tehran sees as part of US covert operations aimed at destabilizing the Islamic republic.

Ethnic minorities in the oil-rich but impoverished province of Khuzestan that constitutes part of Iran’s border with Iraq have long complained that the government has failed to reinvest profits to raise the region’s standards of living. The World Health Organization (WHO) identified Ahwaz in 2013 as Iran’s most polluted city.

Iranian Arabs further charge that they are being discriminated against because of government suspicions that they are susceptible to foreign Arab influence. That suspicion is rooted in Iraqi leader Saddam Hussein’s bloody eight year war against Iran that ended in 1988. Saddam falsely expected that Iranian Arabs would welcome the opportunity to gain independence from Iran.

The Iranian Arab refusal to side with Saddam failed to earn Arabs in Ahwaz the credit they deserved despite the fact that criticism of government policies is often framed in ethnic and nationalist terms. Government suspicions have been fuelled by recent conversions to Sunni Islam of a number of Iranian Arabs, a move that largely constitutes individual efforts to escape perceived discrimination.

Unrest in Ahwaz has been long simmering. The popular revolts of the Arab world in 2011 that toppled the autocratic leaders of Tunisia, Egypt, Libya and Yemen reverberated in Khuzestan were protesters commemorated anti-government demonstrations in 2005. Activists who called in April 2011 for a ‘day of rage’ in Ahvaz were confronted by security forces who reportedly killed and wounded scores.

Iran’s crackdown earlier this month on the protesting soccer fans was as much in line with its intolerance toward expressions of anti-government sentiment as it was a response to references to Ahwaz in Saudi media as Arab territory.

Writing in 2012 in Asharq Al Awsat, Amal Al-Hazzani, an academic who has since been dropped from the paper’s roster after she wrote positively about Israel, asserted in an op-ed entitled ‘The oppressed Arab district of al-Ahwaz’  that “the al-Ahwaz district in Iran…is an Arab territory… Its Arab residents have been facing continual repression ever since the Persian state assumed control of the region in 1925…

The Iranians believe that it is an urgent priority to eradicate the Arab race in al-Ahwaz; a necessity for the state to be stabilized. This means that the authorities do not hesitate to tighten their grip on the district’s residents, prompting them to flee the country through various means of intimidation such as summary executions, detaining citizens, confiscating their salaries, depriving them of employment, and preventing them from speaking their mother tongue… It is imperative that the Arabs take up the al-Ahwaz cause, at least from the humanitarian perspective,” Ms. Al-Hazzani wrote.

James M. Dorsey is a senior fellow at the S. Rajaratnam School of International Studies, co-director of the University of Würzburg’s Institute for Fan Culture, a syndicated columnist, and the author of The Turbulent World of Middle East Soccer blog and a forthcoming book with the same title.