FIFA reaffirms its role as pillar of established order 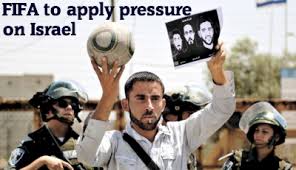 A recent visit by world soccer body FIFA president Sepp Blatter to the Middle East spotlighted the group’s role as a pillar of the existing political and football governance order under the guise of a fictional separation between sports and politics rather than a force for greater transparency and accountability.

To be sure, Mr. Blatter’s support during his visit of Israeli Football Association (IFA) chief Avi Luzon upheld the principle of a ban on government interference in the affairs of national soccer associations. It also demonstrated that it is a principle that works to some degree in functioning democracies but becomes a farce in autocracies where governments control governance of the game with or without the façade of formal elections.

The main thrust of Mr. Blatter’s visit was to ease Israeli restrictions that hamper Palestinian soccer. Nevertheless, his thinly veiled threat that the IFA would be suspended and the Israeli national team banned from international competitions put a halt to calls by Israeli culture and sport minister Limor Livnat for Mr. Luzon’s resignation because of an alleged conflict of interest. A committee appointed by Mr. Livnat demanded Mr. Luzon’s resignation of Luzon on the grounds that his affiliation with soccer club Maccabi Petah Tikva was in conflict with his position as head of the IFA.

Mr. Livnat’s gunning for Mr. Luzon was no doubt politically motivated. Mr. Luzon chaired Maccabi prior to become IFA president but still attends the club’s games. Nevertheless, what Mr. Blatter’s support did not do was ensure an independent investigation into the allegation that would have been in line with best practice rather than uphold soccer governance’s policing of itself. That policing mechanism is fundamentally flawed witness the massive corruption scandals that have rocked world soccer in the last three years.

By the same token, FIFA has effectively been a pillar of autocracy in the Middle East and North Africa by seldom intervening in a world in which soccer associations are controlled by the ruler’s pawns or members of ruling families. In doing so, it has allowed autocrats to control the only non-religious institution that provides a venue for protest in the absence or advance of a popular revolt.

The mosque and the soccer pitch constitute the two venues where autocrats cannot simply crackdown on protesters because of the fact that football is the one thing that evokes the kind of deep-seated emotion that religion does and the sheer number of people involved in a soccer-crazy part of the world.

Beyond the key role that militant soccer fans played in successful anti-autocratic revolts like the overthrow in 2011 of Egypt’s Hosni Mubarak, the soccer pitch has become a venue of protest in a host of countries, including Saudi Arabia, Iran, Morocco and Algeria.

Underlying FIFA’s failure to enforce best practice and its non-interference in government manipulation is the fictional notion that politics and sports do not and should not mix. Nothing could be further from the truth irrespective of whether in a democracy or an autocratic system. One just needs to look at the composition of the FIFA executive board or the International Olympic Council as recently highlighted by investigative German sports journalist Jens Weinreich.

Greater transparency and accountability as well as the enabling of powerful international sports associations to live up to their lofty principles and values would be significantly enhanced by recognizing reality for what it is: sports and politics are inextricably intertwined. Denial of this fact of life undermines and lacks credibility.

That sports and politics are intertwined is evident at every twist of the road from the direct involvement of rulers, politicians and governments in the boards and executive committees of regional and international sports associations to the use of mega events by nations and governments to the role that global governing bodies play in the legitimization of rulers. Recognizing that reality would open the door to enforcing a charter or code of conduct that would govern the relationship of sports and politics. That is of course the one thing that neither politics nor the existing sports governance structure does not want.

James M. Dorsey is a Senior Fellow at the S. Rajaratnam School of International Studies as Nanyang Technological University in Singapore, co-director of the Institute of Fan Culture of the University of Würzburg, and the author of the blog, The Turbulent World of Middle East Soccer.
Blatter FIFA Israel Palestine