Monday 16 July 2012
In the final part of his series on fan culture, Andrew McFadyen looks at the role of football - and in particular Cairo's Al Ahly club - in promoting and defending Egypt's 2011 revolution.

Al Ahly is the most successful football team in African history. The Cairo club
has won the African Champions League a record six times and 35 Egyptian
league titles.
One supporter described them to me as an "Egyptian treasure". When I
asked what the club means, another fan replied with the simple one word
answer: "life".
Across the world, football brings hope to people living hard lives in hard times.
But in the Middle East and north Africa, the game is also tied up with politics.
Al Ahly was founded at the beginning of the twentieth century as a club for
Egyptian nationalists and those who opposed British colonial rule. The team's
red strips were inspired by the colour of the old national flag.
Ahmed Ghaffar, better known as Heema, is a founding member of Ultras Ahlawy,
the team's hardcore supporters. He told Channel 4 News that: "being an Ahly fan
means you're someone full of revolution and love for this country."
Side by side
Ahly’s fierce local rivals, Zamalek, were the team of the Brits and the monarchy.
The Cairo derby between these two sides is so volatile that it is played at a
neutral venue and usually with a foreign referee.

t was Ahly and Zamalek Ultras who led marches into Tahrir Square and in some areas, where security forces had blocked exits, it was Ultras who would stand on roofs and threw down Molotov cocktails.James Dorsey

During the revolution, these historic differences were set aside and opponents on the pitch stood side-by-side at the mass protests in Tahrir Square.
James Dorsey, a senior fellow at the S Rajaratnam School of International Studies in Singapore, says that the region's autocratic rulers did not allow uncontrolled space.
"The only release valves in which people could express themselves were the Mosque and the football stadium."
"The Ultras, essentially because of their philosophy, challenged the control
of the regime at soccer matches. You had four years of tough battles in the
stadiums for control of that space."
Onto the streets
When uprising began against Egypt's former President, Hosni Mubarak, the
fans took their desire for freedom onto the streets.
Ghaffar says, "We always say that our revolution started in 2007 not 2011.
Most of the group was thinking freedom all the way. We went down to the
streets to be part of the revolution as Egyptian citizens, not as Ultras."
The fans groups shared the demands of all Egyptians. The difference was
that their experience of confronting the police at football matches meant
they were battle hardened and did not run from trouble.
Dorsey explains that most of the great mass of humanity in Tahrir Square
had never taken part in protests before.
"The Ultras had done this for four years and were fearless. They brought
organisation, and were in a sense the shock troops of the revolution."
"It was Ahly and Zamalek Ultras who led marches into Tahrir Square and in
some areas, where security forces had blocked exits, it was Ultras who
would stand on roofs and threw down Molotov cocktails." 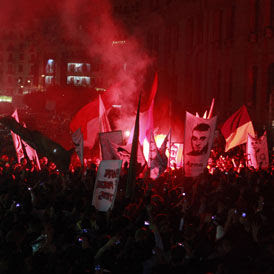 Paying a price
They bravely defended the
protesters against attacks from
the security forces and helped
people to overcome the barrier
of fear about confronting the regime.

Al Ahly paid a terrible price for their
role in opposing the military when 74
fans were killed in a riot in February
during a match in the north eastern city of Port Said. The incident is the worst in
Egyptian sporting history.
The incident prompted protests from Al-Ahly's fanswho demanded quick
investigations into the deaths (pictured left).
At best the security forces were negligent in allowing weapons to be taken into
the stadium and standing back when the violence erupted, but it is widely believed
that they wanted to teach the Ultras a lesson.
'We blame the authorities'
Ghaffar, who was at the match, says that seconds after the game ended, opposing
fans rushed onto the pitch from all sides while the police stood motionless.
"We blame the official authorities, the Ministry of Interior and the Military Council.
As everyone knows they wanted revenge against anyone who took part in the
January revolution."
The Ultras say they are waiting for the courts to decide things, but they won't stand
silent with anything less than justice.
A few days ago, they forced their team to abandon a training session by invading the
pitch in protest against the club's perceived failure to stand up for the rights of those
who lost their lives in Port Said.
In the old Egypt, Al Ahly's success made them an icon of hope. In the new Egypt, the
heroes are in the stands, not on the pitch.
You can follow Andrew McFadyen on Twitter @apmcfadyen
http://www.channel4.com/news/egypts-fotball-revolution