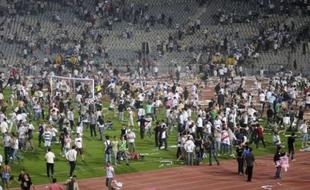 Egypt’s post-revolution political and economic battles are being fought on the soccer pitch with crowned Cairo club Zamalek SC in the eye of the storm.
Egyptian clubs won a first battle this week by forcing the interior ministry to rescind an order that would have held the clubs rather than the police responsible for security at professional league matches. The clubs argued that they were not equipped to enforce security at matches and that hiring private security firms would put an unwarranted financial burden on them at a time that they are already teetering on the verge of bankruptcy.
The initial order was designed to lower the profile of the police, which since the toppling in February of President Hosni Mubarak after 30 years in office by mass anti-government protests has been largely absent from the streets of Cairo. Egypt’s police force is widely hated as the force that Mubarak employed to repress any expression of dissent against his regime. Ultras – organized, militant, violence prone soccer fans – with those supporting Zamalek in the lead clashed in recent years on an almost weekly basis at matches with heavily present police forces.
The battle over responsibility for security occurred on the eve of the resumption on April 13 of league matches after a three-month suspension of all games in late January to prevent the pitch from becoming an opposition rallying point. Egypt’s military rulers last month agreed only reluctantly to allow a resumption of matches after clubs warned that a continued suspension would spark their bankruptcy.
The interior ministry’s failed attempt to shift responsibility for security to the clubs came barely a week after Zamalek ultras stormed the pitch in the Cairo International Stadium during their team’s African championship match against Tunisia’s Club Africain. The police were largely absent as the invading ultras destroyed goalposts and everything else in their path and attacked the referee and Tunisian players. The ultras played a key role in the frontlines of the anti-Mubarak demonstrations during clashes on Tahrir Square with police and supporters of the ousted president.
As if the threat of a ban on participation in African championship matches for several years as punishment for the fan invasion were not enough, Zamalek is also confronting demands that the club be cleansed of officials who supported Mubarak as well as a revolt by many of its key top-tier players who complain that they have not been paid since October of last year.
Zamalek chairman Galal Ibrahim is attempting to persuade two of Egyptian soccer’s most controversial officials, Zamalek board member Ibrahim Hassan and his twin brother, team coach Hossam Hassan, from resigning on Thursday after the club’s first league match against Harras el Hodoud, the team of Egypt’s border guards. “There is too much talk and I want to know what the Hassans intend to do,” Ibrahim told Egyptian soccer website FilGoal.com.
Fans have demanded the resignation of the Hassan brothers after both expressed support for Mubarak as their supporters joined ranks with the former president’s opponents on Tahrir Square. Their ire focussed particularly on Ibrahim Hassan, who led a demonstration against the protesters and demanded that food and medical supplies be prevented from reaching Tahrir Square where demonstrators were camped in January and February for 18 days until Mubarak resigned. Zamalek would become the second Egyptian Premier League club where heads have rolled if the Hassan brothers are forced to resign. Protesting ultras last month forced the chairman of the port city of Alexandria’s Ittihad Al-Skanadarya, a member of Mubarak’s National Democratic Party (NDP), and three of his board members to step down.
Ibrahim Hassan, a famed former player known for wearing his emotions on his shoulder and for shooting from the hip, has been accused of  instigating the ultras’ storming of the pitch with remarks he made immediately after Zamalek’s initial match in Tunis in March against Club Africain. The match was interrupted by a few Tunisian fans invading the pitch during the game. The Confederation of African Football (CAF) failed to sanction Club Africain for the intrusion. Analysts suggested that Hassan may have believed that Zamalek like Club Africain would get away with a disruption of the game.
“This can’t be a football game. This is a fiasco. Our goalkeeper Mahmoud Abdul-Rahim found a supporter lying in the goal when he countered a dangerous ball. Other (Tunisian) supporters were running across the field. This is not the freedom we were calling for. I tell you this will be repeated in Egypt. I call on Zamalek fans to come down during the return game in Cairo,” Ibrahim told Egyptian online radio GoalFMRadio.com.

The Hassan brothers are also at the center of a mounting dispute which could leave Zamalek as well as other Premier League teams deprived of many of their top players as they gear up to resume competition matches. Zamalek on Tuesday fined seven players EGP 50,000 each ($8,400) for going public with their complaint to the Egyptian Football Association (EFA) that they had not been paid for the past six months. Zamalek also removed goalkeeper Abdul-Wahed Al-Sayed as captain of the team. Players at Ittihad al-Skandarya and Premier League Club Ismailia SC have filed similar complaints.
"The coaching staff decided to punish septet Abdul-Wahed Al-Sayed, Ibrahim Salah, Mohamed Abdul-Shafi, Ahmed Gaafar, Ashour Al-Adham, Hazem Emam and Alaa Ali. They will be sanctioned because of their media statements, which were released without our authorization,” Ibrahim Hassan told FilGoal.com.
The dispute between the players and the Hassan brothers offers the players an opportunity to repair their ruptured relations with their supporters, who have denounced players for standing on the side lines while they were demonstrating for Mubarak’s departure. “We will never forgive the players for supporting Mubarak. We see them as abusive. We don’t shout their names during matches. They play for money, not for the club,” said Muhamed Hassan, a 20-year old computer engineering student and aspiring photographer, who is one of the founders of the Ultras White Knights (UWK), the militant Zamalek fan group.
Playing to fan dislike of the Hassan Brothers, Al-Sayed said Ibrahim Hassan was the reason he and other players had filed their complaint with the EFA. “He insulted me before the trip to Tunisia last month and even so I played for the sake of the fans and the manager (Hossam Hassan). I do not accept being insulted inside the club, and if things don’t change I will have to end my spell with Zamalek by the end of the season,” Al Sayed said. Al-Sayed’s predecessor Essam Al-Hadari left Zamalek last year after charging that the Hassan brothers had addressed him with foul language.
The dispute with the players could lead to Zamalek becoming the second team to be forced to include some of its Under-21 players in its Premier League line-up. Newly appointed Ittihad Al-Skandarya manger Ahmed Sari, a former Egyptian international, announced this week that a strike by unpaid players had forced him to promote 15 U-21 players to the club’s top tier team in advance of the resumption of league matches.
Al Zamalek Club Africain EFA Egypt Football Ittihad Al-Skandarya Soccer Tunisia