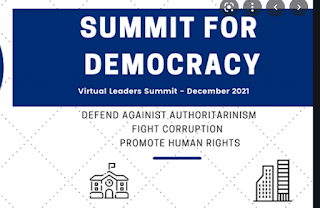 The United States has signalled in advance of next week’s Summit for Democracy that it is unlikely to translate lip service to adherence to human rights and democratic values in the Middle East into a policy that demonstrates seriousness and commitment.

In a statement, the State Department said the December 9-10 summit would “set forth an affirmative agenda for democratic renewal and to tackle the greatest threats faced by democracies today through collective action.” e State Department said that in advance of the summit, it had consulted with government experts, multilateral organisations, and civil society "to solicit bold, practicable ideas” on “defending against authoritarianism,” “promoting respect for human rights,” and fighting corruption.

Of the more than 100 countries alongside civil society and private sector representatives expected to participate in the summit, only Israel is Middle Eastern, and a mere eight are Muslim-majority states. They are Indonesia, Malaysia, Pakistan, Albania, Iraq, Kosovo, Niger, and the Maldives.

US President Joe Biden has made the competition between democracy and autocracy a pillar of his administration policy and put it at the core of the United States’ rivalry with China.

"We're in a contest…with autocrats, autocratic governments around the world, as to whether or not democracies can compete with them in a rapidly changing 21st century," Mr. Biden said.

Yet, recent statements by the Pentagon and a White House official suggested that, despite the lofty words, US Middle East policy is likely to maintain long-standing support for the region’s autocratic rule in the belief that it will ensure stability.

Popular revolts in the past decade that toppled leaders of Egypt, Tunisia, Yemen, Libya, Algeria, Sudan, Iraq, and Lebanon suggest that putting a lid on the pot was not a solution. That is true even if the achievements of the uprisings were either rolled back by Gulf-supported counter-revolutionary forces or failed to achieve real change.

To be sure, Gulf states have recognized that keeping the pot covered is no longer sufficient. As a result, countries like Saudi Arabia and the United Arab Emirates have developed plans and policies that cater to youth aspirations with economic and social reforms while repressing political freedoms.

The US appears to be banking on the success of those reforms and regional efforts to manage conflicts so that they don't spin out of control.

On that basis, the United States maintains a policy that is a far cry from standing up for human rights and democracy. It is a policy that, in practice, does not differ from Chinese and Russian backing of Middle Eastern autocracy. Continuous US public and private references to human rights and democratic values and occasional baby steps like limiting arms sales do not fundamentally alter things.

Neither does the United States’ choice of partners when it comes to responding to popular uprisings and facilitating political transition. In dealing with the revolt in Sudan that in 2019 toppled President Omar al-Bashir and a military coup in October, both the Trump and Biden administration turned to Saudi Arabia, the UAE, Egypt, and Israel. While Israel is a democracy, none of the US partners favour democratic solutions to crises of governance.

White House Middle East coordinator Brett McGurk signalled this in an interview with The National, the UAE’s flagship English-language newspaper, immediately after a security summit in Bahrain that brought together officials from across the globe. US officials led by Secretary of Defense Lloyd Austin sought to use the conference to reassure America's allies that the United States was not turning its back on ensuring regional security.

Mr. McGurk said that the United States had drawn conclusions from “hard lessons learnt” and was going “back to basics." Basics, Mr. McGurk said, in a nod primarily to Iran but potentially also to Saudi Crown Prince Mohammed bin Salman, entailed dumping "regime change policies.” He said the US would focus on "the basics of building, maintaining, and strengthening our partnerships and alliances" in the Middle East.

Mr. McGurk’s articulation of a back-to-basics policy was reinforced this week with the publication of a summary of the Pentagon’s Global Posture review, suggesting that there would be no significant withdrawal of US forces from the region in Mr. Biden’s initial years in office.

The notion of back to basics resonates with liberals in Washington's foreign policy elite. Democracy in the Middle East is no longer part of their agenda.

"Instead of using US power to remake the region...policymakers need to embrace the more realistic and realisable goal of establishing and preserving stability,” said Council of Foreign Relations Middle East expert Steven A. Cook even before Mr. Biden took office." What Washington needs is not a 'war on terror' built on visions of regime change, democracy promotion, and 'winning hearts and minds’ but a realistic approach focused on intelligence gathering, police work, multilateral cooperation and the judicious application of violence when required," he added.

Mr. Cook went on to say that a realistic US Middle East policy would involve "containing Iran, retooling the fight against terrorism, to reduce its counterproductive side effects, reorganizing military deployments to emphasize the protection of sea-lanes, and downscaling the US-Israeli relationship to reflect Israel's relative strength."

The United States is in good company in its failure to put its money where its mouth is regarding human rights and democratic values.

The same can be said for European nations and Indonesia, the world's most populous Muslim-majority state and democracy. Indonesia projects itself directly and indirectly through Nahdlatul Ulama, the world’s largest Muslim civil society movement, as the only major supporter of a moderate interpretation of Islam that embraces human rights without reservations and pluralism and religious tolerance.

That has not stopped Indonesia from allegedly caving into a Saudi threat not to recognize the Indonesian Covid-19 vaccination certificates of pilgrims to the holy cities of Mecca and Media if the Asian state voted for an extension of a United Nations investigation into human rights violations in the almost seven-year-old war in Yemen.

Similarly, Indonesian President Joko Widodo has signed agreements with the United Arab Emirates on cooperation on religious affairs even though the UAE's version of a moderate but autocratic Islam stands for values that reject freedoms and democracy.

The agreements were part of a much larger package of economic, technological, and public health cooperation fuelled by US$32.7 billion in projected Emirati investments in Indonesia.

The Biden administration's reluctance, in line with a long list of past US presidents, to do substantially more than pay lip service to the promotion of human rights and democratic values brings to mind Albert Einstein’s definition of insanity as "doing the same thing over and over again and expecting different results.”

President George W. Bush and his then-national security advisor, Condoleezza Rice, acknowledged two decades ago that jihadist violence and the 9/11 attacks were partly the results of the United States’ failure to stand up for its values. They bungled, however, their effort to do something about it, as did Barak Obama.

It is not only the Middle East and other regions’ autocracies that pay the price. So do the United States and Europe. Their refusal to integrate their lofty ideals and values into effective policies is increasingly reflected at home in domestic racial, social, and economic fault lines and anti-migrant sentiment that threatens to tear apart the fabric of democracy in its heartland.

The backlash of failing to heed Mr. Einstein’s maxim and recognizing the cost associated with saying one thing and doing another is not just a loss of credibility. The backlash is also the rise of isolationist, authoritarian, xenophobic, racist, and conspiratorial forces that challenge the values in which human rights and democracy are rooted.

That raises the question of whether the time, energy, and money invested in the Summit of Democracy could not have been better invested in fixing problems at home. Financial Times columnist Janan Ganesh nailed it by noting that “shoring up democracy is almost entirely domestic work.”

It's a message that has not been lost on democracy's adversaries. In what should have been a warning that hollow declaratory events like the Summit of Democracy are not the answer, Iranian President Ebrahim Raisi told last September's United Nations General Assembly: "The United States' hegemonic system has no credibility, inside or outside the country.”