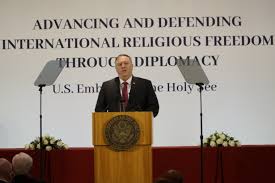 US Secretary of State Mike Pompeo is set to boost efforts by the world’s largest Muslim movement to recontextualize Islam during a forthcoming visit to Indonesia as part of a three-nation Asian tour. The tour is likely to be the secretary’s last official trip prior to next month’s US presidential election.

Mr. Pompeo’s engagement with Nahdlatul Ulama, a powerful Islamic grouping in Indonesia, with an estimated following of 50 million people, takes on added significance against the backdrop of the Trump administration’s push for a definition of human rights that redefines notions of freedom of religion at the expense of other basic rights in advance of a hard fought election that Donald J. Trump could lose.

It also comes as French President Emmanuel Macron kicked into high gear his self-declared mission of reforming what he has termed an Islam that “is a religion that is in crisis all over the world” in the wake of the gruesome murder of Samuel Paty, a 47-year old teacher.

Mr. Paty was killed by an 18-year old youth of Chechen descent after he used cartoons depicting the Prophet Mohammed in a class about freedom of expression.

The Indonesia-leg at the end of Mr. Pompeo’s tour, which is first taking him to India and Sri Lanka, similarly comes as Nahdlatul Ulama, an independent civil society movement, competes globally with Saudi, United Arab Emirates, and Turkish state-backed efforts to garner religious soft power and shape the definition of what constitutes moderate Islam.

Nahdlatul Ulama was founded almost a century ago in opposition to Wahhabism, the austere interpretation of Islam, that has largely guided Saudi Arabia since its founding in 1932.

Mr. Pompeo and his top aides are scheduled to participate in two days of events in the Indonesian capital organized by Nahdlatul Ulama to nurture “the shared civilizational aspirations” of Indonesia, the United States and Islam, defined by the group with the Qur’anic phrase that the faith is “a source of universal love and compassion.”

By giving Nahdlatul Ulama the State Department’s seal of approval, Mr. Pompeo is implicitly acknowledging the fact that the group unlike its rivals in the quest for religious soft power has started to put its money where its mouth is.

Unlike its soft power rivals, Nahdlatul Ulama has spelt out its definition of moderate Islam with its adoption in 2015 of the concept of Nusantara (Archipelago) or humanitarian Islam that calls for a full embrace of the United Nations Declaration of Human Rights (UNHDR).

Countries like Saudi Arabia and the UAE project themselves as models of undefined forms of moderate Islam manifested by engagement in inter-faith dialogue and varying degrees of religious tolerance.

They have, however, stopped short of addressing theologically problematic concepts like that of kafirs or infidels, the Muslim reference to non-Muslims, slavery, dhimmis, people of the book that Islam recognizes but accords a lesser status than Muslims, apostasy, and blasphemy.

They have also manoeuvred in inter-faith gatherings to evade unrestricted support of the UN human rights declaration.

By contrast, Nahdlatul Ulama has taken initial steps in that direction even if it still has a ways to go. Thousands of the group’s religious scholars issued a fatwa or religious opinion that eliminated the notion of infidels, effectively removing one pillar of Muslim perceptions of religious supremacy.

Based on statements by Nahdlatul Ulama leaders, the group’s scholars are likely to next do away with the legal concept of slavery.

The group’s litmus test will be if and when it takes on apostasy and blasphemy, concepts that are certain to be far more emotive and controversial. Nahdlatul Ulama officials say the group has long accepted in practice conversion away from Islam.

Mr. Pompeo’s acknowledgement of Nahdlatul Ulama further suggests that the State Department recognizes that religious reform is more likely to successfully be enacted by independent civil society actors with proper religious credentials and a significant following rather than states.

It is a recognition that by implication highlights the limitations of efforts by states, including Saudi Arabia, the UAE and Turkey, to define the essence of Islam as well as Mr. Macron’s ambition to solve the faith’s problems for it.

Mr. Pompeo lands in Jakarta shortly after signing the Geneva Consensus Declaration alongside a host of countries that propagate conservative values and rank low on Georgetown University’s Women, Peace and Security Index.

The declaration seeks to promote women’s rights and health and strengthen the family but emphasizes that “in no case should abortion be promoted as a method of family planning.”

It stipulates that there is “no international right to abortion, nor any international obligation on the part of States to finance or facilitate abortion.”

Many of the signatories are members of the Group of Friends, a block of 25 nations in the United Nations that seeks to pre-empt any expansion of rights for girls, women, and LGBT people and weaken international support for the Beijing Declaration, a landmark 1995 agreement that stands as an internationally recognized progressive blueprint for women’s rights.

Much of the group’s positions are coordinated by the Center for Family and Human Rights, or C-Fam, a small but influential far-right group that focuses on abortion, sexual orientation and gender identity. C-Fam has worked closely with the State Department dating back to the administration of US President George W. Bush.

Accompanied by among others Mary Ann Glendon, the head of the State Department’s Commission on Unalienable Rights, Mr. Pompeo’s arrival in Jakarta also comes after the centre-right Centrist Democrat International (IDC-CDI), the world’s largest alliance of political parties, acknowledged the Commission’s report as “a re-affirmation of the spirit and substance of fundamental human rights.”

Indonesia’s National Awakening Party (PKB), which has five seats in President Joko Widodo’s cabinet and is an influential member of IDC-CDI, is closely associated with Nahdlatul Ulama.

Critics have charged that the Commission’s report fuels assertions that there are too many human rights and prioritizes religious liberty and property rights at the expense of protections against discrimination particularly on the basis of gender.

As a result, Mr. Pompeo’s endorsement of Nahdlatul Ulama could prove to be a double-edged sword. It strengthens the group’s proposition, yet also identifies it with one faction in a global battle that not only seeks to define the soul of Islam but also fundamentally shape what constitutes a human right.