In November 2015 when we submitted the final manuscript, the overall tone of the book was upbeat for Southeast Asia.  Except for Thailand, the countries in Southeast Asia, particularly Indonesia, Myanmar, and the Philippines, seemed poised to complete their democratic transition, rebuild institutions founded on the principles of democratic governance, and enshrine the principles and practices of open participatory systems.  The one bright light in the Middle East/North Africa is Tunisia whose Quartet for Democracy had just won a Nobel Peace Prize for its role in the democratic transition.

In the past two months, since the Philippine electorate gave a whopping mandate to Rodrigo Duterte, some 2000 Filipinos have died, mostly on allegations of drug use/abuse, none of them having had the opportunity to seek redress through the judicial system.  Rule of law seems to have been usurped by executioners-on-motorcycles.  He has gone to war with a female Senator who wants to investigate extrajudicial killings, as well as the female Supreme Court chief justice with whom he is also in a war of words over warrantless arrests.   He is threatening to pull out of the UN.

Similarly, In a very recent cabinet reshuffle in Indonesia, former General Wiranto who “is among senior officers indicted by UN prosecutors over gross human rights abuses during the 24-year occupation of East Timor” as quoted in the Straits Times of 27 July 2016, (http://www.straitstimes.com/asia/se-asia/indonesia-names-controversial-ex-general-as-security-minister), was appointed to the sensitive post of security minister.  “Activists have called it a step backwards for human rights,” quoting again from The Straits Times.

This, then, raises the question about Southeast Asia:  are we seeing a democratic rollback?  In the book’s introduction, we referred to two authors who asked the same questions.  Erik Paul’s book Obstacles to Democratization concluded that the ASEAN nation-states are a “passing phenomenon” caught up in superpower contests mainly between the US and China, and citizens are swallowed up and gobbled up by the forces of global capitalism, international financial institutions, and geopolitical players who compete militarily in their struggle for global hegemony.”

Mely Anthony-Caballero, in her edited book Political Change, Democratic Transition, and Security in Southeast Asia, echoed the same disappointment over the failure of democratic consolidation in Southeast Asia after the euphoria of the first wave of democratization in the 1980s that began in the Philippines.  Several country case studies in Caballero’s book point towards the entrenchment of patronage politics, the lack of attitudinal requirements among the citizenry to embrace democratic ethos, and the preference for stability and material prosperity rather than the mess and the noise of rambunctious participatory politics.

Thailand remains the foremost example for an authoritarian resurgence in this century, not once, but twice, when military coups in 2006 and 2014 effectively ended the legitimately-elected governments of Thaksin Shinawatra and Yingluck Shinawatra respectively. 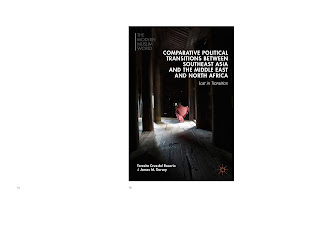 Order at: Lost in Transition:  Comparative Political Transitions between Southeast Asia and the Middle East and North Africa

-----
Surely, these gripes and grievances are not without merit, but the scenarios are not altogether grim.

Civil society remains a vibrant pro-democracy force in Cambodia, Indonesia, Myanmar and the Philippines, where civil society and public participation have been enshrined in their respective constitutions. A very active and robust human rights community in Cambodia undertakes a variety of rights-related campaigns, ranging from land grabs to anti-trafficking.  In Myanmar, 180 CSOs signed a petition o parliament to reject four proposed bills by a Buddhist organization called the Association for the protection of Race and Religion. Civil society activists view these bills as potentially “inciting hatred, discrimination, conflict and tension.”

Malaysia’s Bersih (literally means clean) continues to be at the forefront of collective mobilization for a variety of social causes despite the Internal Security Act of 1960.  As Prime Minister Najib Razak fights for regime survival, the wide entanglement with CSOs in this particular instance is a display of Southeast Asia’s ability for political engagement, regardless of formal restrictions and limitations.

But the most striking feature of Southeast Asia’s transition is the decline of mass atrocities, what Alex Bellamy terms “the other Asian miracle.”  It is a region that, in the last four decades, has enjoyed a more “peaceful present,” leaving behind a violent past. Unlike the Iraq or Syria, there are no overt conflicts within and among nation states, nor are there border disputes that would pit nation states against each other.  Sovereignty claims are, by and large, respected even after the “invasion” of Sabah in 2013 by the forces of Sultan Jamalul Kiram III, one of the claimants from the Sulu Sultanate in the southern Philippines to Sabah in Malaysia.    According to The Economist, the invasion, as amphibious assaults go, was “admittedly tame.”

The Greater Mekong Sub region, a predominantly economic sub-regional program encompassing five Southeast Asian countries, once the backyard of intense conflict and violence now hosts The East–West Corridor, a massive infrastructure program that consists of a road, railway, and energy network has established “connectivity” among the five countries and has stimulated trade among them.  The battlefields of the 1960s and 1970s has been transformed into a vibrant competitive marketplace, with formal and informal institutions to mediate and facilitate interregional relationships.

It is a truism today that the so-called “peace dividend” in Southeast Asia has converted past warriors into entrepreneurs and consumers, and where current generations engage in the competition for market share rather than the struggle for military supremacy and territorial conquest.

It is perhaps these features of the other Asian miracle that constitute the starkest contrast between Southeast Asia and the Middle East.

One primary lesson from this comparative study is that civil society is indispensable in building the necessary “political constituency for democracy.  New democracies are beleaguered by old regime forces.  Civil society participation is even more necessary during such period to prevent the forces of authoritarianism from subverting gains and preserve newly-opened hence fragile spaces of civic life.  Newly-installed democratic regimes, on the other hand, should be even more reliant on their partnership with civil society organizations during these precarious transition periods.

And then a second valuable lesson.  In the morning-after situation when the protest sites have been emptied, the activists need to heed the call of the “politics of the boardroom” where several hundred decision-makers rather than millions of street protesters undertake the tasks of creating, allocating, and distributing public goods and services.  These require joining the executive branch of the government particularly its messy tangle of bureaucratic offices and agencies.  Hold-overs from the old regime are bound to interact with the new appointees.

The ability to seek common ground and to prevent bureaucracy from being held hostage by competing forces so that ordinary citizens can rely on continuous and uninterrupted services is a task that requires different leadership skills.  In addition, new entrants need to learn very quickly the mechanics of managing large organizations, steering them towards the accomplishment of concrete goals, and marshalling the human and other material resources to fulfil socio-economic objectives.

No matter the political or ideological colour, or one’s confessional affiliation, garbage needs to be collected, revenues raised, water and electricity services provided.  Former activists in Indonesia and the Philippines have joined and pursued long-term careers in governments.  They run and manage ministries and public commissions on national budgets, education, anti-poverty and human rights; they attend legislative hearings and negotiate with donors; they create committees to decide on projects; and they work with the media and academics to ensure that the message of government services reaches the public.  The same is happening in Myanmar today.  Joining government is not a straightforward process.  The path of transition is littered with uneasy compromises.

Professor Randy David at the University of the Philippines who was one of the original “people power warriors” in 1986, wrote an op-ed in the Philippine Daily Inquirer on 28 August.   In Ulaanbaatar he exchanged views among fellow activists and intellectuals on democratic transitions.  He wrote of his own pessimism regarding the Philippines before he left for Ulaanbaatar.  But while there, in dialogue with fellow people power activists from Fiji, Nepal, Mongolia, and Myanmar, he wrote:

“The Ulaanbaatar forum left me with more questions than answers.  But I came away from the discussions feeling renewed and hopeful.  For once I understood what the sociologist Niklas Luhmann meant when he referred to democracy as “an evolutionary achievement of society.”  A nation must grow into democracy.   Unlike us Filipinos, the Mongolians who spent centuries defending their land against their powerful neighbours know only too well how long it will take them still to complete their own democratic transition.”

Dr. Teresita Cruz-del Rosario is a Senior Research Fellow at the Asia Research Institute, National University of Singapore. She is the author of The State and the Advocate:  Development Policy in Asia  and also just published Lost in Transition:  Comparative Political Transitions between Southeast Asia and the Middle East and North Africa, co-authored with Dr. James M. Dorsey.