Will They or Won’t They? Saudi Recognition of Israel is the $64,000 QuestionSS 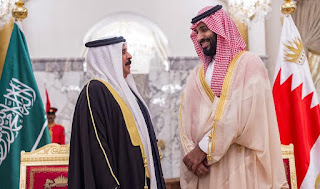 Will the Saudis formalize relations with Israel or will they not? That is the 64,000-dollar question.

The odds are that Saudi Arabia is not about to formalize relations with Israel. But the kingdom, its image tarnished by multiple missteps, is seeking to ensure that it is not perceived as the odd man out as smaller Gulf states establish diplomatic relations with the Jewish state.

Bahrain’s announcement that it would follow in the footsteps of the United Arab Emirates was as much a Bahraini move as it was a Saudi signal that it is not opposed to normalization with Israel.

Largely dependent on the kingdom since Saudi troops helped squash mass anti-government protests in 2011, Bahrain, a majority Shia Muslim nation, would not have agreed to establish diplomatic relations with Israel without Saudi consent.

The Bahraini move followed several other Saudi gestures intended to signal the kingdom’s endorsement of Arab normalization of Israel even if it was not going to lead the pack.

The gestures included the opening of Saudi air space to Israeli commercial flights, and publication of a Saudi think tank report praising Crown Prince Mohammed bin Salman’s stewardship in modernizing the kingdom’s religious education system and encouraging the religious establishment to replace“extremist narratives” in school textbooks with “a moderate interpretation of Islamic rhetoric.”

They also involved a sermon by Abdulrahman al-Sudais, the imam of the Grand Mosque in Mecca – the world’s largest mosque that surrounds the Kaaba, Islam’s holiest site, that highlighted Prophet Mohammed’s friendly relations with Jews.

Mr. al-Sudais noted that the prophet had “performed ablution from a polytheistic water bottle and died while his shield was mortgaged to a Jew,” forged a peace agreement with Jewish inhabitants of the Khaybar region, and dealt so well with a Jewish neighbor that he eventually converted to Islam.

The imam’s comments, a day before US President Donald J. Trump was believed to have failed to persuade King Salman to follow the UAE’s example, were widely seen as part of an effort to prepare Saudi public opinion for eventual recognition of Israel.

Criticism on social media of the comments constituted one indication that public opinion in Gulf states is divided.

Expression of Emirati dissent was restricted to Emirati exiles given that the UAE does not tolerate expression of dissenting views.

However, small scale protests erupted in Bahrain, another country that curtails freedom of expression and assembly. Bahraini political and civil society associations, including the Bahrain Bar Association, issued a statement rejecting the establishment of diplomatic relations with Israel.

“What results from normalization will not enjoy popular backing, in line with what generations of Bahrainis have been brought up on in terms of adherence to the Palestinian cause,” the statement said.

Bahrain has long been home to a Jewish community and was the first and, so far, only Arab state to appoint a Jew as its ambassador to the United States.

Polling by David Pollock of The Washington Institute for Near East Policy found that Palestine ranked second to Iran.

Earlier polls by James Zogby, a Washington-based pollster with a track record that goes back more than a decade, showed Palestine ranking in 2018 as the foremost foreign policy issue followed by Iran in Emirati and Saudi public opinion.

The same year’s Arab Opinion Index suggested that 80 percent of Saudis see Palestine as an Arab rather than a purely Palestinian issue.

Mr. Pollock said in an interview that with regard to Palestine, Saudi officials “believe that they have to be a little cautious. They want to move bit by bit in the direction of normalizing at least the existence of Israel or the discussion of Israel, the possibility of peace, but they don’t think that the public is ready for the full embrace or anything like that.”

Gulf scholar Giorgio Cafiero noted in a tweet that “Israel formalizing relations (with) unelected Arab (governments) is not the same as Israel making ‘peace’ [with] Arab people. Look at, for example, what Egypt’s citizenry thinks of Israel. Iran and Turkey will capitalize on this reality as more US-friendly Arab [governments] sign accords [with] Israel.”

This year’s Arab Opinion Index suggest that in Kuwait, the one country that has not engaged with Israel publicly, Turkey—the Muslim country that has taken a lead in supporting the Palestinians—ranked highest in public esteem compared to China, Russia, and Iran.

A rift in a UAE-backed Muslim group created to counter Qatari support of political Islam and promote a state-controlled version of Islam that preaches absolute obedience to the ruler serves as a further indication that Palestine remains an emotive public issue.

In Mr. Al-Sudais’ case, analysts suggest that the criticism is as much about Palestine as it is a signal that religious leaders who become subservient to the whims of government may be losing credibility.

Mr. Al-Sudais’ sermon contrasted starkly with past talks in which he described Jews as “killers of prophets and the scum of the earth” as well as “monkeys and pigs” and defended Saudi Arabia’s conflict with Iran as a war between Sunni and Shiite Muslims.

The criticism coupled with indications earlier this year that Saudi Arabia’s religious establishment was not happy with Prince Mohammed’s handling of the coronavirus pandemic may be one reason why Saudi Arabia is gesturing rather than formalizing already existing relations with Israel.

Authorities reportedly arrested in March Sheikh Abdullah al-Saad, an Islamic scholar, after he posted online an audio clip criticizing the government for banning Friday prayers. Mr. al-Saad argued that worshippers should be able to ask God for mercy.

An imam in Mecca was fired shortly after he expressed concern about the spread of the coronavirus in Saudi prisons.

Scholars Genevieve Abdo and Nourhan Elnahla reported that the kingdom’s Council of Senior Clerics had initially drafted a fatwa, or religious opinion, describing the closing of mosques as a violation of Islamic principles. They said that government pressure had persuaded the council not to issue the opinion.

Concern among the kingdom’s ultra-conservative religious scholars that the ruling Al-Saud family may break the power-sharing agreement with the clergy, concluded at the birth of the kingdom, predates the rise of King Salman and Prince Mohammed.

Indeed, the clerics’ concern stretches back to the reign of King Abdullah and has focused on attitudes expressed both by senior members of the ruling family who have since been sidelined or detained by Prince Mohammed and princes that continue to wield influence.

The scholars feared that the ruling family contemplated separating state and religion. This is a concern that has likely been reinforced since Prince Mohammed whipped the kingdom’s religious establishment into submission and downplayed religion by emphasizing nationalism.

Ultra-conservative Saudi religious scholars are also certain to have taken note of post-revolt Sudan’s recent decision to legally remove religion from the realm of the state.

Ultra-conservative sentiment does not pose an imminent threat to Prince Mohammed’s iron grip rule of a country in which many welcomed social reforms that have lifted some of the debilitating restrictions on women, liberalized gender segregation, and the as yet unfulfilled promise of greater opportunity for a majority youthful population.

It does however suggest one reason why Prince Mohammed, who is believed to favor formal relations with Israel, may want to tread carefully on an issue that potentially continues to evoke passions.